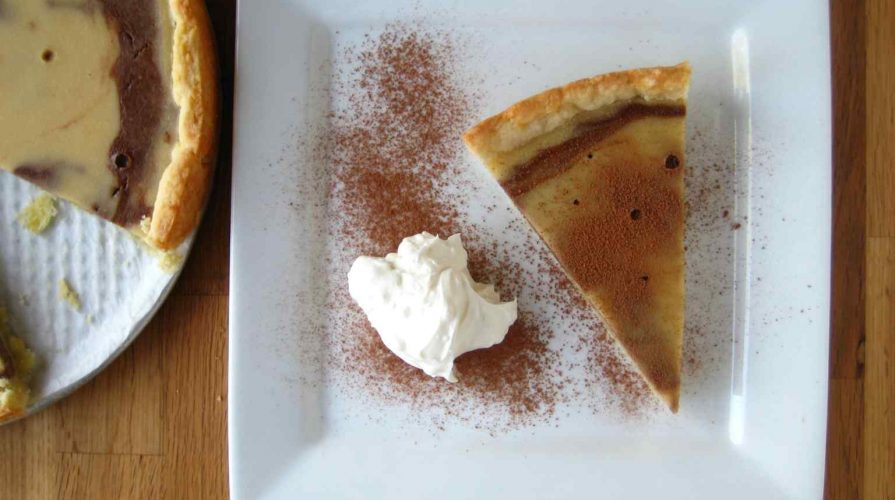 happy anniversary! to story of a kitchen! :::: The blog is one year old today, officially stumbling out of its infancy into toddlerhood. Just like Grub who often stumbles and bonks his head on the nearest floor/wall/stair, there’s still a little wobbliness, but it has got a little more attitude with age just like my strong-willed Peach, more of a personality, and more stories to share than it did in the very beginning. What better way to celebrate this quirky jaunt of my food memories, my trials with food thermometers and non-stick pans, a playground of ethnic cuisine, perhaps more recipes than time to make them than I expected, than an unusual, if not unexpected, dessert. The road to unusual desserts often start with other unusual experiences. It was my first year of college, the first week, in fact, that I met Erik. The Knox College Choir was at the Homecoming football game in the Knox Bowl, that impressive carve-out recess of a football-field, grilling and selling bratwurst. Since that time, we have deviated in our social groups, our majors, and general life experience. We found spouses. His father passed away. I gave birth to Peach, then Grub. It wasn’t until an unexpected email popped up into my inbox almost three years ago that we reconnected, he being in Chicago where I was also living at the time. Since college, he traveled a creative road, fulfilling himself in study of music and choir direction, then settling to take a position as a Director of Music and Arts in a large church in the Chicago Loop. His dream job, he once told me, nothing could be better.

It was around that same year when we reconnected that I also had to take one of my general medical boards exams before the end of residency. And it just so happened that the testing center, amidst the hubbub of Chicago traffic, the grid of downtown one-way streets, and luminous skyscrapers, was a mere block from the church. My worst fear the night before any large exam is being late, caught up in the predictable snarls of traffic, unpredictable on the amount of time it takes to get out of them. So I asked Erik for advice, could he recommend a nearby hotel? Was there someone who lived close by with whom I could stay for two nights, away from the also unpredictable sleep schedule of my toddler Peach at the time? After inquiring about hotels downtown that he knew about, he offered another suggestion on accommodations. The pastor and his wife graciously offered to host me in their home. This is where I was introduced to some unique accommodations during the two days that I was to take my exam. Their home happened to be the steeple of the church, in an apartment nested in the towering spires. The church building was completed in 1924. Originally, a large, impressive set of church bells were to be placed in the steeple, so it was durably constructed with steel cross beams.  After twenty years, nothing happened, and in the mid-40’s they instead built an apartment for the senior pastor at the time. Ever since then, the senior pastor has lived in the steeple.

The end of the annual Chicago Air and Water show was the weekend I stopped by to meet the pastor and his wife, jets rumbling and pressing the air in my ears, racing behind the skyscrapers of Chicago. To enter the guest apartment (a floor separate from the pastor’s home), it required a key in the lobby elevator to go to the 22nd floor, then another to open the glass door to the small elevator to the apartment, then small gold, antiquated key to access the small, rickety elevator. Every door seemed to be bathed in a golden, ethereal light. Every click  past another floor was another level closer to this secret hideaway. I was amazed at the quietness, the solitude, the peace of the place once inside. Despite being in the heart of the Chicago Loop, not a shred of Chicago traffic noise was apparent. I stayed on the third floor (level “D”) of the apartment, only accessible to the pastor by the tiny elevator. There  was not a speck of dust. The windows spanned the floor to ceiling, allowing the city lights to bathe the night in a blue glow. I felt like a little bird nestled in between the magnificent spires as I fell asleep the first night.

After that first day of the examination, my tired red and blue eyes watched the pinks and lavenders melt into the sky as the sun set, city sounds far below me. Just as I thought I could curl into bed at 8:30PM, the pastor called and invited me down for chocolate with the dinner party friends. I felt obligated, although pajamaed and exhausted, so I headed down the squeaky elevator to level B for cake, conversation, and a night on the patio. After eating some amazing chocolate sauerkraut cake and having some wonderful conversation with everyone (an architect, an actress, the pastor, his wife, and spouses), it was apparent I was fading at 9:00PM. After another day of testing and returning to the tower of quiet, I felt my head was deflating and my eyes dry and tired from the day. It was time to go home to see Peach. She was cuddly that night, her back against my belly, curling up like a kitten. I felt her chest rise and fall, heard her sucking her fingers, and listened for an occasional dreamy word come from her mouth, eyes still closed. That night I dreamed of cake, multiple choice answers A, B, C, and D, and the staid, sentinel spires.

And that brings me back to cake and unusual. While today’s recipe’s combination of canned vegetables and chocolate doesn’t seem odd to me with my exposure to many Asian desserts involving sweetened beans, it’s probably not something that most of my friends from my formative years would ever think to try. Now, couched in Hey! It’s Italian! Those desserts are always good!  instead of Asian sweet red bean soup with mochi — errrr…, I think I can convince some unadventurous people to try it. Just like my unusual accommodations for those two nights in the church, I tried something new and it didn’t seem so strange in retrospect. Don’t miss the yogurt-mascarpone dollop on top: that  is the golden glow of the dessert, much like the golden glow of the church doors.

I often choose to try unusual recipes, and try unusual things in life. What could be better than the undulate experiential landscape those create? Things like a sweet bean torte or an apartment hammocked in between church spires are much better than you expect at the end of it all.  That exam that I took? I passed. And my gracious hosts? Still living in the apartment high in the sky. I often dream of seeing that apartment again, calmed by the meditation and the absolute solitude, my brief Walden Pond perhaps, if I am so lucky to visit Erik and his friends again.

And thank you for all of you, too, readers. Here’s to another fun year!

Save Print
sweet torte of cannellini beans, ricotta, and cocoa powder
Author: story of a kitchen (minimally adapted from La Cucina Italiana magazine, November 2011 issue)
Recipe type: dessert
Prep time:  1 hour
Cook time:  40 mins
Total time:  1 hour 40 mins
Ingredients
Instructions
Notes
* Before baking, make sure you pop surface air bubbles with a toothpick. I did not do this; you can see the circular remnants of those cooked, oven-popped bubbles on the header photo.
Wordpress Recipe Plugin by EasyRecipe
2.1.7
If you love this, share it!