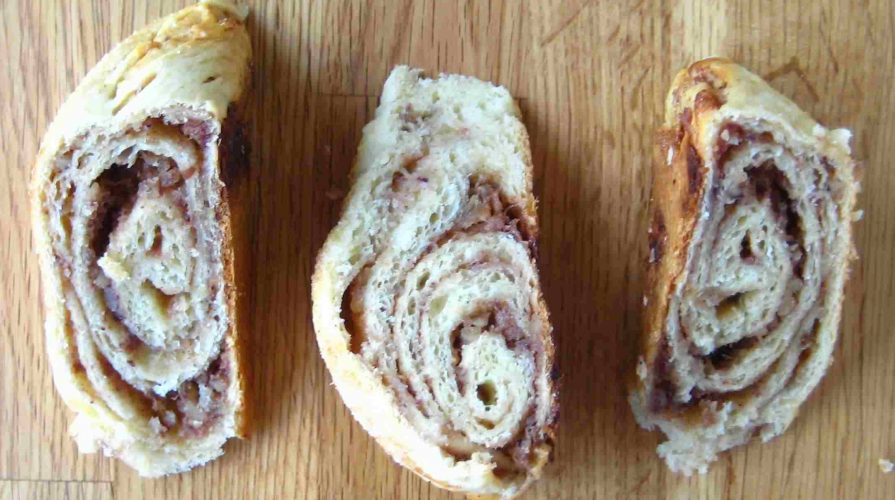 Dandelions blaze yellow, waiting to turn to the soft gray puff of summer’s end. Without guilt, I smash summer squash beetles, their bodies emitting an inky spiciness. Once baby pea green grasshoppers, now a nutty brown as the summer lopes on, spring with wide hops and wriggle to force themselves from my fingers. Hypertelomeric cicadas stop their droning buzzing when I approach too closely. As if I can’t see them, the size of Mejool dates, sitting stiffly on the willow branches. Days go on, the cicadas disappear. The long end of a California summer also signifies autumn and the advent of the holidays. At the cusp of Halloween, department stores were already in the Christmas spirit, advertising months of layaway service. There were already bins of fake silver-plated bells, smiling glittery snowmen ornaments in crispy cellophane boxes, and cheery pine trees in every imaginable color gracing each corner of the stores. For me, I think of cinnamon, nutmeg, the warm spicy smells of mulled wine and freshly baked cookies and breads. Our family never made a point to stick with everyone else’s traditions and only make pumpkin pie at Thanksgiving, or Christmas cookies at Christmastime, or even a big fat ham for Easter. I tend to do the same thing. It was actually springtime when I first made this holiday bread, Potica.  It is almost like a double- swirled cinnamon roll: the dates (cicadas!), walnuts (grasshoppers!), and spices (squash beetles – ew!) are rolled up into a long snake of dough, then swirled again, into a nautilus of layered cinnamon and walnuts. Why wait until the holidays to make this? It’s too good to keep relegated to only once a year. What I love most about this bread is that it is everything you want in a cinnamon roll without being too sweet. It doesn’t need icing. It doesn’t need brown sugar. It doesn’t need to be slathered with butter. It is really that good. Round 1 of bread-making: we ate it too fast to take photos. After Round 2 and photographing the bread, I found myself unable — yes, unable — to make it look pretty. I tried a myriad of angles. I tried ambient lighting inside versus outside. I tried ripping off part of the bread so the wonderful layers could be appreciated. The camera would not give me what my eye was seeing. It lied to me! The camera does lie! So disgusted with this, I finally just ate the bread and scrapped the photos. I had to start over and make the bread again. Eh, not so bad, since I got to eat more of it. Now Round 3: see those layers in the header photo? That’s what makes this bread so delicious. The layers show themselves beautifully with the dates and walnuts contrasting with the light dough. And the walnuts? Red. Yep. Why red walnuts? Just for show. There is no difference that I’ve noticed in flavor of the red walnuts versus the brown. I bought these red walnuts for a little holiday spirit, but found that they really didn’t seem to give that color pop I was hoping for. I think the secret is the sweetness of the dates and the subtle crunch of the walnuts swirled in each bite. Traditionally, it can be served with savory foods or as a sweet course. Often, it is served with ham. A variety of fillings are used: poppy seeds, cottage cheese, leek, chocolate, or honey. Different pans and sizes of loaves are expected from home to home. Whatever kind of potica you make, any festivity is worthy of celebration. It could be the end of summer. A new baby. Christmas. Even that you finally folded all the laundry. It’s all good.

5.0 from 2 reviews
Save Print
potica (slovenian sweet bread)
Author: adapted from America's Best Lost Recipes and from Pots & Pans (a cookbook published by the Slovene Women's Union of America
Serves: Makes 2 loaves (one to eat and one to share)
Ingredients
Instructions
Notes
* Make sure you whip those egg whites properly. If not, the filling isn't quite as light and spongy. Adding the sugar slowly, very slowly, as the egg whites are being whipped is the key. And don't overbeat them. ** If the dates are not finely chopped, your date "paste" will be lumpy and harder to incorporate into the egg whites. I roughly chopped my dates on one trial and found the lumpiness not prohibitive to taste, but not so pretty for presentation. Learn from me: finely chop dates = pretty pretty. *** My mom and I made 16 x 20-inch and a 16 x 17-inch rectangles, rolled very thinly, almost paper thin. The difference between the two dough sizes was that I eyeballed the dough balls when I halved the dough -- and obviously did not do so evenly.
Wordpress Recipe Plugin by EasyRecipe
2.1.7
If you love this, share it!