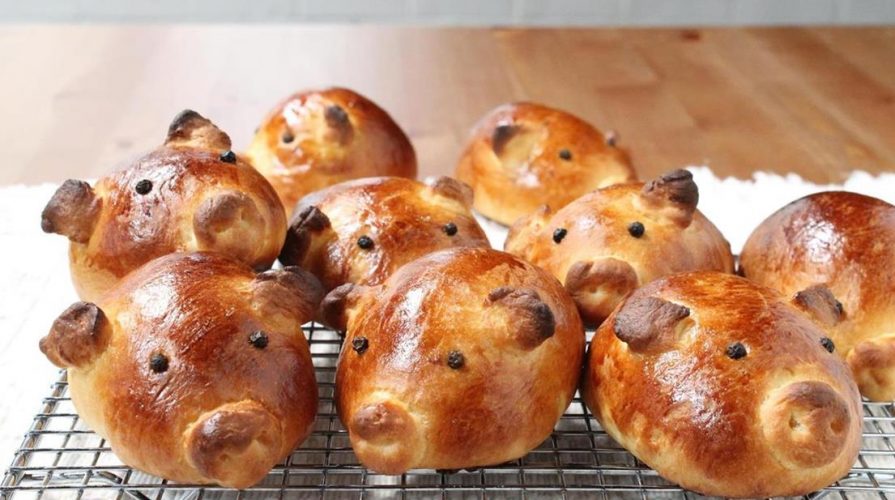 Bamsie made his debut into our childhood after reading Astrid Lindgren’s Lotta series. The young protagonist Lotta, a more realistic child compared to Lindgren’s ever-popular Pippi Longstocking, was rarely without her stuffed pig Bamsie. His agreeable accompaniment to her adventures provided us poring over the books, trying to locate the tiny pig in the detailed drawn pages.

My siblings and I made clear our love of Bamsie to friends, squealing on about cuteness. We were living in England at the time, with a handful of American ex-pats in our school. My five-year-old sister Catherine had such a friend named Katie hearing our extols, and she felt the same. Around bedtime one night, probably while we were reading one of Lotta’s stories, someone knocked at the door unexpectedly. It was Katie’s mother with a gift for Catherine. An almost complete replica, she had sewn a Bamsie from soft baby pink fleece, presenting it excitedly to pre-bedtime children. (It was weird to me that Katie’s mom would call on us so late. As an adult I wonder if she was perhaps cycling through a manic phase and felt compelled to bring gifts to many of her children’s playmates that night.) Catherine remembers a misshapen Bamsie, like a hotdog rather than a pig. Cuddly Bamsie was so popular in our family, Katie’s mother made another for my little brother Bryan (or maybe he was the recipient of the first Bamsie, and Catherine the second? Catherine and I don’t remember for sure), which soon appeared at an earlier hour of another day. I believe this twin was to replace Catherine’s hotdog pig, but Catherine refused the trade. The Bamsies were well loved over many years. Their eyes faded into ghost like whites, staring into nothing. We used a Sharpie pen to color in the pupils temporarily. Their pigskin fleece became pilled and dirty. Both Bamsies were washed with little refreshment to their original states. My mother restuffed both of them to bring back their piggish figures. They each traveled around Europe, camping and living in a van for at least one summer. They also got into the US without passports and became citizens (perhaps they have dual citizenship — I’m not sure what the laws are for Swedish stuffed animals with extreme lifestyles). They were often blamed for sitting under our chairs and farting. They were easy scapegoats. And easy sidekicks for our adventures much like Lotta’s. My sister moved from toy pigs to human babies, having four of her own. We were pregnant at the same time, with almost the exact same due dates for her second child and my first. We hoped that they would be born the same day and share a birthday. My Peach decided to arrive five weeks early, and  Peach’s cousin was born on Peach’s original due date. Both of us were staunch babywearers when our children were young (and still as toddlers sometimes), toting them almost everywhere we went, they usually being agreeable observers like Bamsie. The Bamsies still live at Catherine’s house, just as easy to blame for a squealy fart as they were years ago. Even with some farty pigs in the house, Catherine has more grace and aplomb than I do, and an agreeable accompaniment to any group like Bamsie could be, but without the pig-shaped body, pilled skin, pupilless eyes, or lack of conversation. She is willowy and freckled, pupils fully intact, and full of interesting conversation. She is selfless, with a knack for thoughtful gifts Our families convened for the holidays at our home, sounds reminiscent of this summer when our squealing children played in Maine for our parents’ 50th wedding anniversary celebration. She and I revisited a subset of letters I sent her when I studied in Australia in college, ripe with laments of boys, views of feminism from newly minted women’s perspectives (we were indignant that we were certainly not girls…hmph!), alcohol, and the germane details of college life, all soaked in the jargon of the 1990s. Embarrassing, to say the least. We had a good laugh at how far we’ve come. We have both come so far from those days, from being babies to having babies. Today’s recipe of pregnant pig bread is a juxtaposed homage to cute stuffed pigs — stuffed with Bamsie fluff or stuffed with sausage — and my sister’s birthday. These pregnant pig buns aren’t as cuddly and wizened as Bamsie, but they are no doubt exceptional hearty and cute. They are a deviation from a traditional birthday cake — because no one in my family would snub a nose at the non-traditional. We are cheerfully along for the adventures.

Happy Birthday, Cathy! Have a year full of squealy pigs! One year ago: kohlrabi chips

Recipe minimally adapted from http://www.girlversusdough.com/2013/06/17/sausage-stuffed-piglet-buns/ . I’ve been eyeing this one for a year and finally did it!