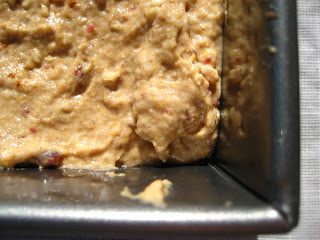 No eggs!
No white flour!
No added sugar!
That means NO FLAVOR!
Wrong.
While skimming through the TV channels one night, procrastinating from something more important no doubt, I found Alan Alda in the Scientific American Frontiers series on PBS talking to one of the original Biosphere 2 project participants Roy Walford. He spoke of eating less, packing in nutrients in less calories, and the benefits of such a diet — living longer.
Curious, but not so curious that I’ve adapted this caloric crusade 100% (I do need to have some caloric frivolity here and there, you know, like Treat “Old Fashion” [sic] Ice Cream), I bought the Biosphere 2 cookbook. It was only after my brother borrowed the book to make a vegan dessert for a vegan friend’s potluck to be visited by numerous vegan-flavored types that I decided to try this recipe for Banana Bread Pudding. After rave reviews from his friend and her potluckers, I delved into this recipe with high hopes already met. I decided although moist and flavorful with the bananas and raisins or other dried fruit, the addition of walnuts gives the bread another layer of flavor and crunch. Even though touted as a bread pudding, this is more like an eggless dense, pudding-like cake to me.

Although I followed the recipe for the two-pan division for the photos you see, I have baked the entire recipe in one 9 x 9 inch pan for a moister, thicker cake countless times. I’ve also added cinnamon and nutmeg because they just seem to be a perfect fit for these bananas. Plus, if you aren’t vegan and like cream cheese frosting, this recipe can’t be missed. It’s a less decadent cream cheese frosting like the typical butter and cream cheese combo we see atop carrot cake. It is, however, absolutely worth the effort to make, if not more delicious.