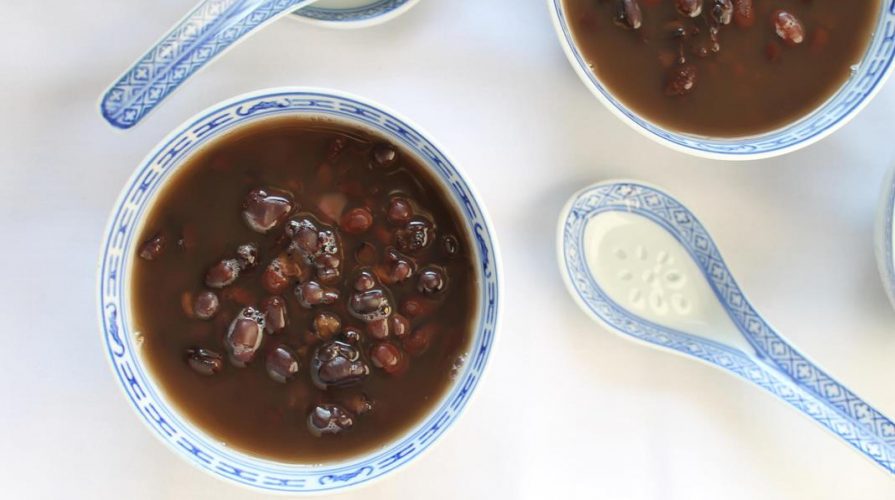 Beans in dessert are not weird.

The United States boasts citizens from more countries in the world than any other country. Yet, many Americans (ahem, mostly the non-first generation white ones) are unashamedly ethnocentric. If there is cuisine that is just a little bit out of the “norm” (translation of “norm”: usually unseasoned, bland or overly salty, fried crap), many people get all bent out of shape. For example (I’ve heard all of these personally):

“You eat salmon eggs on your rice?? Why? It’s like eating BBs. Gross.”

“There are seeds in my candy. Seeds shouldn’t be in candy.”

“Fish sauce is terrible. It smells like something died.”

“Ew, these beans are sweet. Beans in dessert don’t seem right. And they’re in the ice cream??”

Beans in dessert are right. They’ve been right for hundreds of years. Peasant food beans may be, they still hold accolades from me in their ability to sustain generations of people in savory and sweet.

China’s present-day red bean soup is called 紅豆沙 (hǒng dòu shā). And red is deliberate: the auspicious color is connected to life celebrations such as weddings and Chinese New Year. It symbolizes good luck and happiness. Sweet red bean soup is flexible to the seasons, served warm in the winter and cool in the summer months. It is sometimes mixed with milk and frozen for a sweet, textured popsicle.

Simple is true. And this is one of the simplest and truest desserts. It is simply red beans, sugar, and water. A small bowl of red beans soup is a perfect end to a big meal. It is not too heavy but has enough weight in protein to feel satisfying.

Happy Chinese New Year! The Year of the Monkey!

One year ago: beautiful food: a pictorial (lots of colorful photos!)

Save Print
chinese red bean soup recipe
Author: story of a kitchen
Recipe type: Dessert
Ingredients
Instructions
Notes
* Many recipes I read include pre-soaking the beans. I've never done it this way. I don't feel the extra step helps the cook time all that much.
Wordpress Recipe Plugin by EasyRecipe
3.3.3070
If you love this, share it!