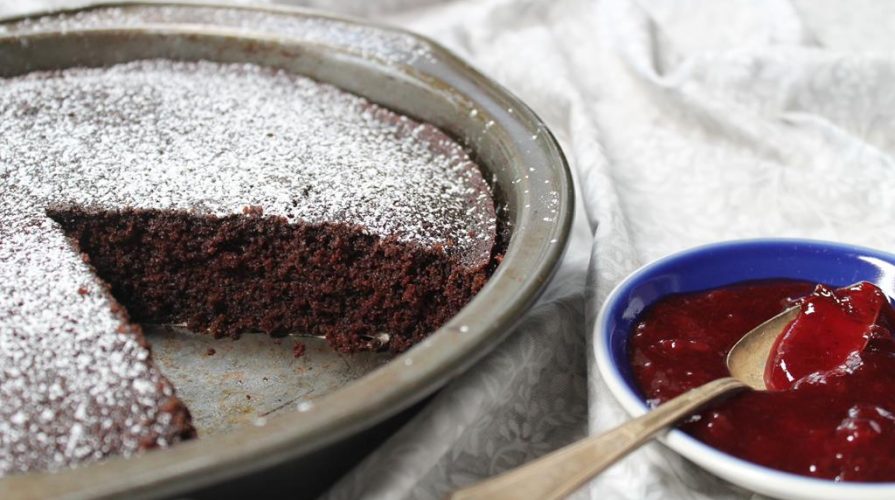 Growing up, we often had chocolate cake for birthdays, especially my dad’s. My mom would always make the frosting, often whipped cream based, chocolate-laden, with a dose of ice cream to accompany. These cakes never had to be ultra fancy: we just wanted the chocolate. My twin brother, David, and I baptized our cake-eating years with a chocolate cupcake each, each of our one-year old faces and hands covered with brown, sticky crumbs. Looking at photos years later of the event, our faces were happy, eyes bright, and focused on the newness of cake.

We started making our own chocolate cakes, the first I remember my brother making when we were living in England. It was his spin on a Victoria Sponge cake. Instead of a delicate vanilla sponge cake filled with jam, he made it hearty with chocolate. Being chocolate and filled with Cadbury’s melted milk chocolate, it was quite the opposite of dainty. The two layers mounded up on each other, practically slipping off the softer chocolate layer trying to stick them together. It did not disappoint the chocolate lovers in the family. Though my memory is not very clear, I suspect at least a few of us had chocolate all over our faces, not unlike when David and I were celebrating our first birthday with the chocolate cupcakes. While my brother is not an adamant baker or cook, he has always been a jack-of-all-trades, enjoying building things like a from-scratch hard drive for a computer (housed in an empty cat carrier), hiking, traveling, setting goals to run a marathon and completing it, working as a journalist until its demise in paper to digital, and now managing the day-to-day office workings of medical departments in academic institutions.

David can be one of the most selfless people I know, tending to sick friends for weeks, comforting me when my idiot college boyfriend and I broke up (for the good of all humankind), donating a kidney to an anonymous stranger (yes! really!), and humoring my kids with conversations and games with a childlike interest and appreciation. When we first moved to Northern California for Eat’s fellowship, David helped me get settled with a new baby and no friends, reasonably coerced with bratwurst dinners. He played endless games with toddler Peach, while I was nursing baby Grub. He babysat an infant Grub and toddler Peach when Eat and I scored a reservation with friends to the French Laundry. He often took care of our cat when we were on vacation.

Most of all, he is my twin, my first roommate, being in this world the same exact time I have been living. We experienced things together and far away, we are different yet so connected. He will always be that piece of me that no one else understands: twin.

I know it’s not your birthday, but I wanted to surprise you. It’s just a random blog post for my twin brother. I love you, David. I’m glad are the first person to know me.

Today’s cake is somewhat like so many of us, like my brother: not what you expect perhaps, but much better. We are so quick to judge people by first impressions. That’s so not fair. There is so much more under the surface, or in the crumb. The frosting is a small part, if there is any needed at all. Don’t let the “vegan” in the title scare you: the coconut oil gives the cake tenderness, the baking soda helpful for a light rise, and the chocolate and espresso the deep flavor. You won’t miss the butter and eggs. (Although, if you want to drench the cake in a buttery fudge sauce, I won’t judge you.) Serving with a side of raspberry compote gives a nice tart bite.

One year ago: painter’s palette cookies (for Peach’s eighth birthday)  and  vanilla macarons with violet swiss buttercream and blueberry dust