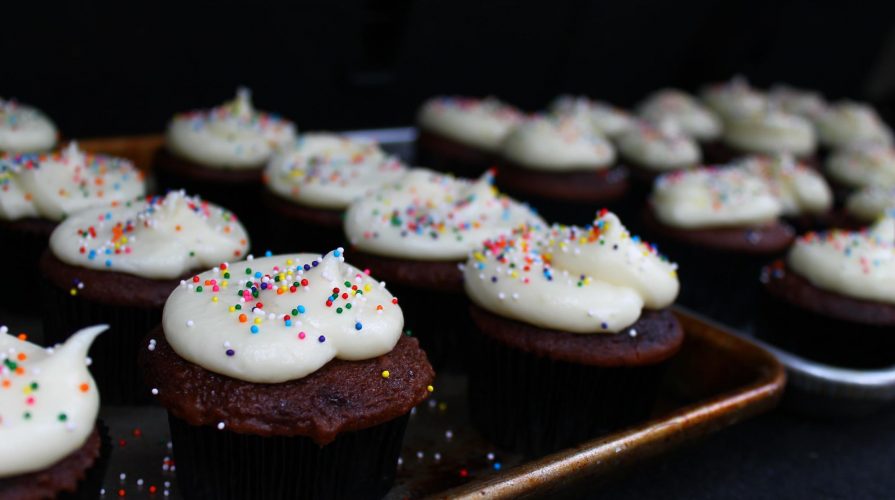 My big man Grub just turned four years old this month. We have gone through a lot this past year: a new sister, two new preschools, a move across the country, a new house, lots of new pairs of longer and leaner pants, acquisition of Ironman and Spiderman costumes, the gradual vanishing of his baby cheeks, and the disappointment that Dad was away in Africa (aka, superhero Ebola Man!) for his birthday. After three years of unabashed cake snubbing (turtle cupcakes last year were well received — a gateway drug into the cake, I believe), Grub graduated from his birthday dessert “other” preference to the well-researched Ninjago and Spiderman cake themes. For months, he and Peach talked about these cake preferences, debating top choice of superhero on the cake, colors, even the mind-blowing idea of combining superheroes fighting crime on ONE cake. After thorough questioning and debate, he finally decided on Ninjago cupcakes. It was a tough decision, easily distracted as he is. If the kid sits for more than five minutes eating a meal without a wiggle or a peep, I wonder if there is something wrong. Despite distractability, some four year olds carefully plan their birthday parties, not just the cake design. Grub and I had lengthy discussions about theme, color, which friends to invite, which cousins could make it. I was surprised, however, this year he rarely focused on the gifts prior to the birthday. He was more interested in the process, the flow chart thoughts, the Venn diagrams of superhero color themes, shared/different powers, if certain crimefighters are friends, whether they like to eat hot dogs, shoot guns, or if they like crickets. This thinking helps organizational skills one needs in preschool. Besides talking about poop and giggling. Picking on his sisters. Stomping in every puddle, no matter how muddy. Sporting a hybrid Ironman-Spiderman costume (mask and body wear combined for a vigorous new hero). I reckon we should name him Supersweaty, as this kid is almost always sweaty.

So we reveled in it. I took a backseat to planning anything, Grub exclaiming that the local indoor jumpy house joint would be great for his birthday fun. Save for the cupcakes (and a dear lump of cash), it was totally set up and coordinated by the party staff. He chose the superhero theme, I made the cupcakes, everyone else did the work.

I had limited responsibility, but I was determined to make those cupcakes memorable. I decided on a new challenge: hand decorated Ninjago sugar cookies to top the cupcakes. I have always wanted to try to decorate with royal icing and use sugar cookies as my canvases. This was my chance. I perused catalogs and websites, compared and contrasted recipes and techniques. I settled on a great website on cookie decorating by Sugarbelle. She also gives great tutorials on how to decorate as well as good website links for ordering supplies. Cute little squeeze bottles? She knows where to find them. Teeny spatulas? Yes! Step-by-step instructions on how to become a cookie artist? It’s all on her website.

Then life happened. Peach was sick a few days before the party, quickly followed by Sky-girl. I needed time to bake the cookies, allow them to sit a day (which helps prevent the oil from leaching out into the icing, per Sugarbelle’s advice), decorate them, and allow to dry completely for a day (or more, with this humidity). I went to Plan B. No sugar cookie cupcake toppers. No from-scratch cupcakes. Enter in Betty Crocker cake mix and plastic Ninjago cupcake toppers. You’d think this would be a pretty easy, given the technology and globalization of our economy. I found the cake mix, no problem, but locating the cupcake toppers proved to be more work than I expected. We can ship live lobsters from Maine within 12 hours to California. We can send a letter across the world in days. But when a mother places an online order for Lego shaped candy and plastic Ninjago cupcake toppers with guaranteed one-day shipping, there is a glitch. I spent the night before the birthday party opening the front door every 15 minutes to check if the package had been delivered, guaranteed before 8pm. Nothing.

I opened the door the next morning, the day of the party, still no package in sight. After spending another 20 to 30 minutes wrangling the kids, trying to find socks and shoes, packing up the cupcakes, we walked outside to find a box sitting on the stoop. The box I had been waiting for all night. The box. Finally. Arrived. As I emailed the vendor requesting my shipping fee be promptly and fully refunded, Peach placed the cupcake toppers carefully on each cupcake. I introduced the Lego shaped candy much to the angst of many of the parents with the sugar highs that resulted afterwards. The cupcake frosting is really the only thing I worked on: I’ve reprised cream cheese frosting, much like I did last year when I lapsed on birthday details for Peach’s birthday. Cream cheese frosting seems to be my most forgiving cake venture when everything else is an eddying failure.

Despite the glitches, Grub didn’t care. He just wanted to jump on the trampoline. He wanted to race down on the jumpy house slide. He couldn’t wait to show his friends his cupcakes and ninjago. And he gave me big hugs and kisses, “I love you, Mommy!” he smiled. “You look so pretty today,” he told me as I sported a clean pair of jeans and a t-shirt. Though he is my middle child, he is my only boy. That mother-son connection is like no other. He will always be my Big Man, my baby. Happy Birthday, Grub. I love you, my supersweaty superhero, little and strong. One year ago: turtle cupcakes (sea turtles made from colorful gumdrops — a big yes from most little kids) and gestational diabetes: epilogue