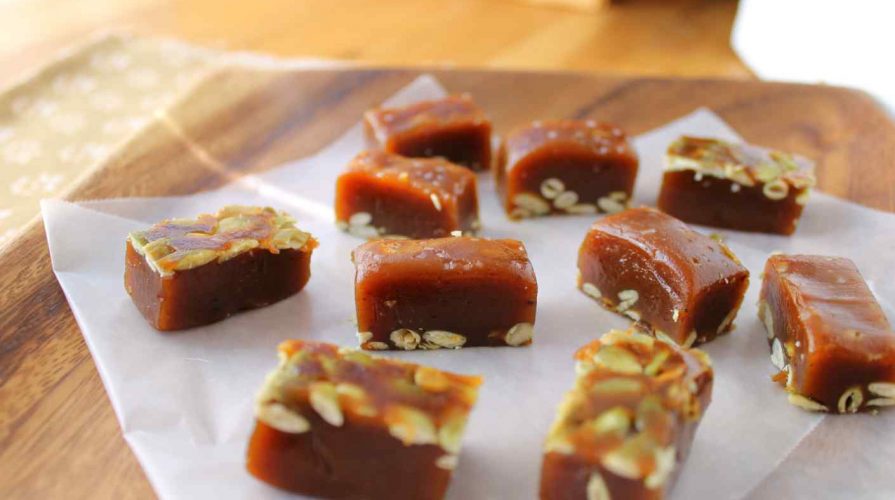 Ah, the cool chill of autumn, the colors of turning leaves, and the smell of spices wafting from the kitchen. Not only does this weather remind me of cozy desserts like spiced salted pumpkin and pepita caramels, but it also reminds me of my high school orientation into running. I was never a great athlete as a kid, usually getting picked last for the volleyball team in gym class, or not being aggressive enough to score points in Dodgeball and therefore not a favorite with students or gym teachers alike, or comically concurrently exhausted and amped up after attempting to run a mile on grass in junior high, face beet red, glasses sweaty and slipping down my nose after class, an easy target for finger pointing and snickers. It wasn’t until sophomore year in high school with the advent of gym class and Drivers’ Ed taught by the inimitable Mr. L that my perspective changed. He was an ex-drill sergeant, so other students said. There was no back-talk, so dilly-dallying, no favoritism with the jocks. From those stories, he scared the crap out of me. I was afraid of what was going to go down in this classes, convinced I was going to be the worst of the worst. He expected you to try all of those pushups, even if you had no upper body strength. He demanded that you do every sit-up even if the lactic acid build-up from trying them for the last three days created so much pain that you could barely breathe. He wanted you to run those sprints on the running track because he knew you could. And that’s how I really started running, with his encouragement, that first gym teacher who didn’t ignore my ineptitude at hitting a tennis ball left-handed, or crappy volleyball serves. In Mr. L’s class, the jocks, nerds, dopes, we were all the same when it came to exercise. For some reason, I think Mr. L picked up on my history, my need for some encouragement to shine in some sport, and gave me the right place to flourish. It was the one mile run where I first realized it.

I wasn’t the most agile, or even the fastest on the track that day, but I did well in that mile run. He goaded me firmly but without disrespect. It was the first time I got a real “A” for an event in gym class. Ever.

In the fall, I was on the high school cross-country team. Sadly, it was a short stint on the team because of medial tibial stress syndrome (a fancy and more correct way of describing shin splints) from wearing bad shoes and running too much, too fast. But my love of running has continued. In college for fun. In half-marathons and marathons. An ultra-marathon. In all of my pregnancies. My most favorite time to run is the autumn, when the leaves crunch under my feet, the air is crisp, and the sky cloudy. I start out a little chilly, then warm up and realize that I can still do this. Just like Mr. L.

I recently found out that Mr. L died this year. Thank you for believing in so many students, Mr. L. You are missed.

One year ago: apricot oatcakes