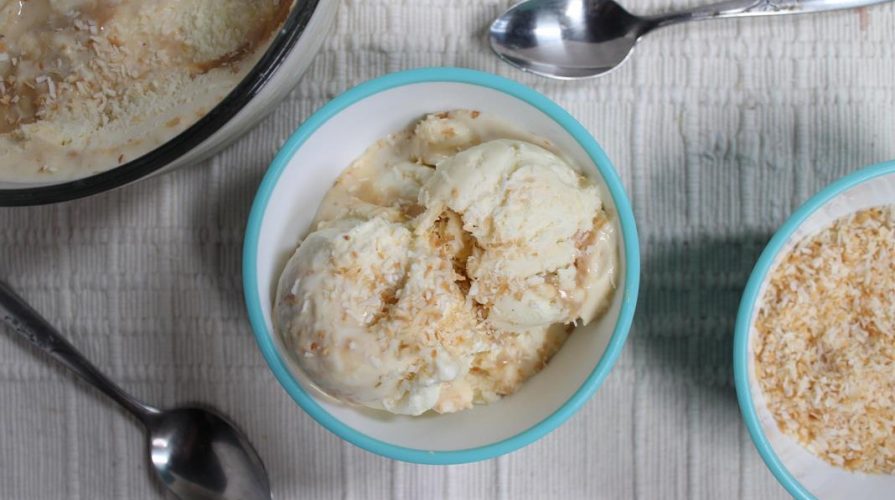 coconut and Scotland: a perfect match Living in East Anglia, England for a short part of my childhood conjures up memories of green meadows, Cambridge University college gardens (the flora unparalleled to anything I’ve seen since), and the ubiquitous cathedrals and stained-glass windows. Influenced by caricatures and history books at that time, I expected Scotland more gray, rocky, and blustery than England.

After tolerating the cramped quarters holding our family of six in a Renault 4 and the choke of car exhaust, we entered the craggy green of Scotland for one of our first family holidays. Overnight we slept off the buzz of the road in our ears, then headed outside to the sunny bloom and scent of the golden gorse. The gold swept up the hillsides, a spotty blanket sweetly scented with coconut. When I first noticed the odor, I thought my nose was playing tricks on me. Was someone actually sunbathing and wearing tanning oil? In this cool weather? Beach-side cocktails and waving palm trees may recall tropical memories for most people. For me, it is Scotland. The spiky golden gorse is known for its toasted coconut scent, seemingly out of place in the highlands of Scotland. I saw little gray that trip, save for the early morning skies, some rocky cliffs, and little bluster excepting the gruff Bed and Breakfast host on our way home in Northern England who didn’t seem to like children much.

So here is my offering to that memory: toasted coconut dulce de leche ice cream. Start by making my slow cooker dulce de leche the day prior. When deciding on what type of coconut milk/cream to use, use this guide: Heavy whipping cream = 38% fat; Coconut cream = 29% fat; Coconut milk = 20-22% fat. Mouth feel for ice cream is important, and fat content can affect that. (There are other components also, like air and ice crystals. Too much to get into here. We’ll just be simpletons for now.) I found using between 25-29% fat from the coconut milk makes mouth feel about right for me. Similarly, this is why you don’t see homemade custard-based ice cream recipes using only heavy cream (38% fat): it would be too heavy. It’s usually a mixture of cream and milk (or, in our case today, heavy cream and coconut cream). In this coconut ice cream recipe, feel free to use the coconut milk (20-22% fat) if you prefer something a bit lighter.

Off to think of Scotland…and coconut.

My next post will be Grub’s FIFTH birthday! Already!