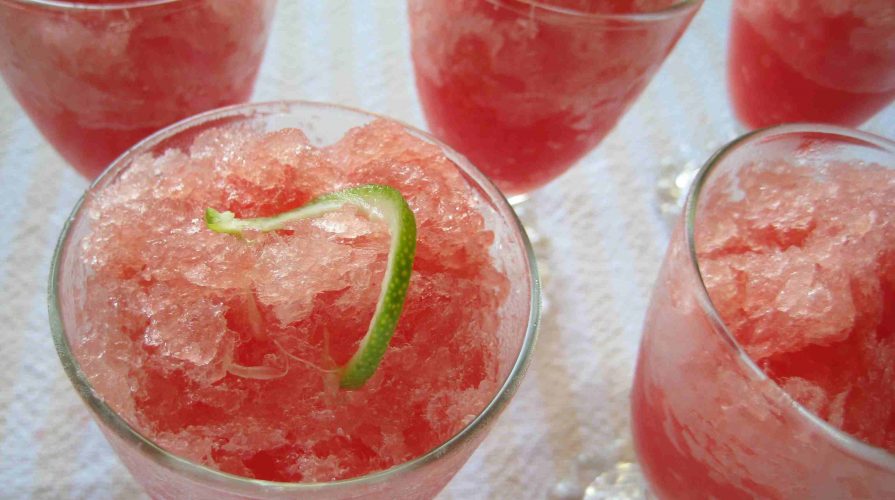 What happened to summer? I was all ready to post this as an end-of-summer melon tribute, then I realized that summer had passed me by, swallowed up by the sun. I can’t complain about the heat — where I live, there was only a couple of weeks of unbearable hot. It makes sense that I didn’t appreciate the watermelon earlier without the unyielding humidity and wiggles of heat emanating from the concrete to remind me. No matter where you summer, whether enveloped by heat or nipped by cool breezes, watermelon is almost universally understood as a summer fruit. Even when I lived in England as a girl, I remember longing for a fresh watermelon, the crisp, almost spongy flesh, juicy and sweet, and striking pink-red. The paltry softball-sized ones I saw at the markets in England were incredibly expensive, nothing that my mother would consent to buying as a matter of policy. Watermelons feed families: what of these? Well, it was embarrassing to even call these dusty green afterthoughts watermelons. My friend Anne visited from England three years after we had moved away, making her appearance on my doorstep in the oppressive Midwestern summer heat. Besides splashing in the public pool and acquiring sunburns, one of the first things we did was devour watermelon. I found a recipe in young miss magazine for “Watermelon Ice,” which we dutifully followed, picking out every last black seed from every chunk before we pureed and froze the juice.

That recipe has long since been lost, lost in moldy stacks of magazines, Michael Jackson calendars (before he turned a chalky white color and had the plastic surgery), and yellowed latch-hooked pictures of Bambi. Basically, so lost in my stacks of childhood that I have little chance to find it. Not that I didn’t try. Rifling through old boxes in my parents’ basement isn’t the best use of my time when visiting. Instead, I finally resorted to looking for many recipes, similar, and now call mine “updated.” This watermelon granita is a grown-up version of the watermelon ice I remember so well, with a splash of rosewater to make into something even more memorable than before. Watermelon is generally such a sweet fruit that I inched down the sugar some compared to many recipes and think adding a little more lime would make the overall taste shine even more. The lime brings out the sweet, almost floral honey taste of the watermelon, and the rosewater steps it up another level.

Using a yellow watermelon here instead of the commonly-found red can also create a guessing-game for your dinner guests. The golden color will lead them astray from the watermelon path (maybe kiwi? with starfruit?) unless they are watermelon connoisseurs.

So there are benefits to forgetting the passing time of summer and of losing recipes. It brought me to the best watermelon recipe I’ve tried yet. No heatwave needed. Save Print
watermelon granita
Author: story of a kitchen (inspired from many sources such as Bon Appetit's recipe 6/2011)
Recipe type: dessert
Ingredients
Instructions
Notes
* Even if you use a seedless watermelon, you will need to strain the puree. I did this to make sure there were no vestigial white seeds floating around. These are not tasty when frozen. Better than the hard, black seeds, but still annoying.
Wordpress Recipe Plugin by EasyRecipe
2.1.7
If you love this, share it!