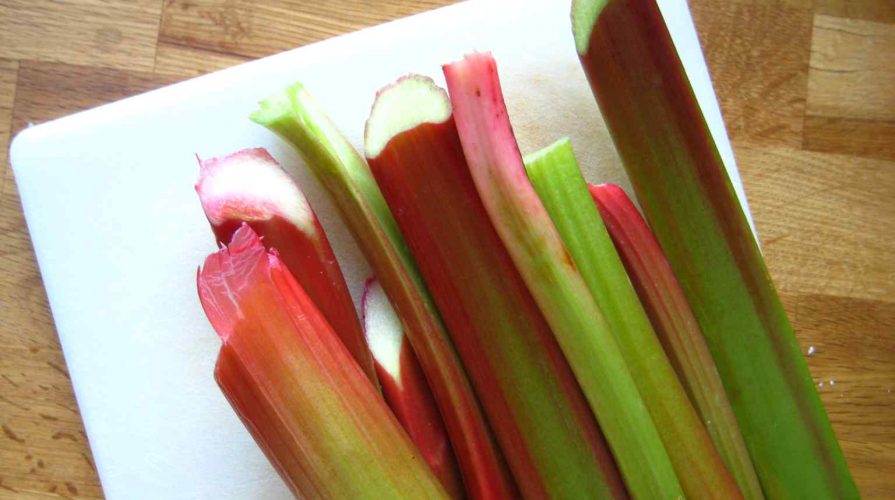 suspicious smells from the kitchen ::: “It smells like marijuana!” my husband said, wide eyed, just up from a nap on the weekend. “Why does it smell like pot?”

“Um, I don’t know. The windows aren’t open,” I answered. None of the neighbors were toking up at the time. “I think you’re smelling the rhubarb I cooked.”

That’s what it was, in fact, the rhubarb. The more I sniffed, the more I understood why Eat was so concerned at first. It really did smell like marijuana, not actually a legal plant and a much better yogurt topping. If someone walked into our home at that point, they may have cast some suspicious glances around, looking for bong or a hastily misplaced baggie skirting the trash can. Such green rhubarb! Alas, my drink will be pink.

I first discovered I liked rhubarb when I was 12 years old. A friend had given me a rhubarb and custard flavored hard candy and I was surprised that the tart, weedy flavor was actually better than I expected. For years, I had seen my mom and aunt gush over my aunt’s rhubarb garden. I never understood the appeal of rhubarb crisp, or pie, or the draw to the earthy, tart odor. Now it suddenly seemed so clear. These days, I like it best in things like this, the strawberry-rhubarb pie my neighbor brought over last week (thanks, L!), and in the the following recipe to make drinks. A homemade rhubarb soda on an almost-summer’s day brings me back to my rhubarb-hating days, thinking I was scoring big with just the vanilla ice cream for dessert. Maybe ice cream floats with rhubarb soda are in order. Or rhubarb mojitos. Or rhubarb compote topping some steel-cut oatmeal. I’ve even had it in a savory dish of crab at the famed Alinea Restaurant. Rhubarb is truly a versatile green, and so under appreciated.

Be warned: if you smell something suspicious wafting from my house, it’s the rhubarb. Promise. Remember, the possibilities are endless.

Save Print
rhubarb simple syrup and compote
Author: story of a kitchen (adapted from the food blog from arcticgardenstudio.blogspot.com)
Recipe type: drink (and breakfast/snack)
Prep time:  15 mins
Cook time:  15 mins
Total time:  30 mins
Ingredients
Instructions
Notes
* If you have green and red streaked rhubarb, your syrup will be pink (like mine in the photos). If you are blessed with ruby red rhubarb, your simple syrup will reflect that.
Wordpress Recipe Plugin by EasyRecipe
2.2.6
If you love this, share it!