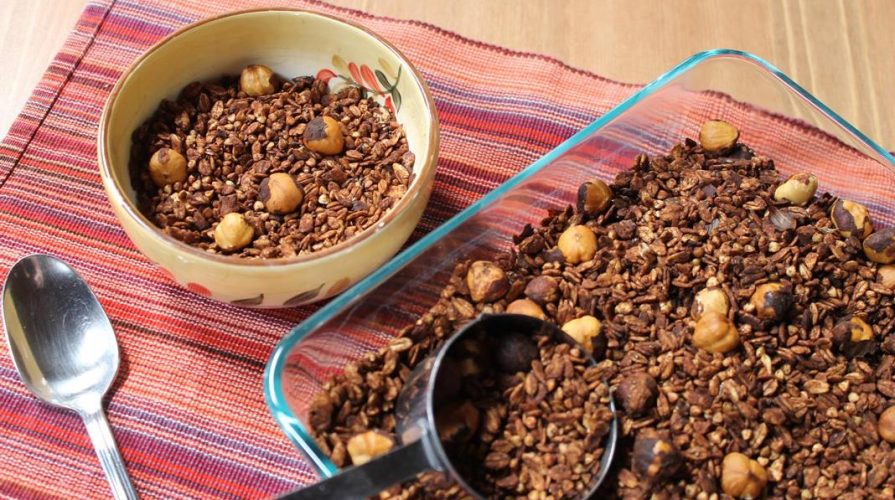 chocolate — for breakfast and memories of the Antechinus :::: In college, I spent a formative time in Queensland, Australia studying marine ecology and biology, gaining weight from eating too many sweets, getting tan and freckled from the bright, golden sun, and discovering Australian beer. I spent my spring break traveling around the country with two other American friends, arriving back in Brisbane early to join up with our Rainforest Ecology classmates for our four-day long field class.

The class consisted of frumpy science students, and us, the three Americans. We already knew each other well, D and B roommates at their college, and me connected through my fate meeting with D on the transPacific flight over a few months prior. We scrounged up a tent, rudimentary cooking utensils, and another tentmate, a gracious Australian girl who had dated a Canadian guy. (This factoid explained her willingness to tent with us, eschewing our pariah-like status with the rest if the class.) D and B brought their sleeping bags, and I pragmatically, for lack of one, used one of the blankets off my dorm bed. We set off for an adventure promising a rich view of rainforest flora and fauna, surrounded by the towering canopies teeming with some of the most unusual and unique life in the world. From Brisbane, we drove about two hours on mostly twisty swaths of narrow roads to reach our destination, O’Reilly’s Rainforest Retreat in the Lamington National Park. The four professors on the trip had accommodations in the retreat building whereas all the university students roughed it camping. As we drove, the flora became more lush and green, thick and dark, the dirt like dark chocolate. I remember distinctly, a street sign, yellow. “ONE LANE” it read. A similar sign, closer to our destination and deeper in the green, alongside the textured and smooth barked trees, had two additional letters added: P and T. They were perfectly placed, matching the font and color of the original words. “ONE PLANET” it said, the yellow background signifying a general warning, the words a reminder. It summed up my months in Australia: I realized then that I would never see these ecosystems and culture anywhere else, ever again.

That first night on September 28, 1993, we settled awkwardly into the next four, finding that cooking dinner over a fire started with flint (no lighter fluid), cooking said meal of boxed pasta was not enough to feed us all and granola bars could not sustain us, no option of electrical lighting made the fire really important for any kind of social interaction though it might attract certain wildlife (which also may pilfer our food supply), and the toilet was a long walk off. Just a toilet. No showers. I knew a good sleep would help reset this askew beginning, ready to see the sights and learn about the wildlife. I’ll be blunt: IT WAS SO &@!#*%$ COLD. Though we dressed warmly per our professors’ and course instructions, my blanket on hard dirt and thin tent fabric was like sleeping on a tile floor. My blanket did nothing. My double sweatshirts and jacket did nothing. I tried moving subtly closer to my tent mates for warmth without causing suspicion. I spent much of the night trying to keep my hands and forearms warm by rotating between stuffing them in my armpits and my crotch. I woke up constantly because I was so cold.

The professors emerged the next morning full of tea and cooked breakfast in the retreat looking fresh and ruddy. The look on one professor’s face the next morning when he asked cheerily how we slept and my response to it, is something I will never forget. I imagine some of the thoughts going through his head were first pity and then that I was just another stupid American. In true gentlemanly fashion, he rounded up some foam mats and an extra sleeping bag for me. I thanked him profusely, yet I still see that look of pity in his eye to this day.

Despite the less than comfortable accommodations and hunger, I remember much of that week academically. I did a survey of brush turkeys. D did a report on bowerbirds nesting. A couple of students did a study on animal scat. (Of course, being college students we thought this was hilarious. Everybody told jokes about it.) Waking up at 4 AM to record them, I learned about the predawn birdsong start and the importance of which bird started and frequency of calls. Crimson rosellas and imperial king parrots, prolific like common robins, greeted us in the mornings. We dug our fingers in the dirt looking for insect life, various plants, and foraged for dry wood. We sweat in the humid sun, soon shivering under cloudy skies in lukewarm rain. We learned that male marsupial mice died from stress-induced immunocompromise about two weeks after mating, living exactly 11 1/2 months.

Each student was expected by the professors to handle these Antechinus  (marsupial mice) by dumping the trap contents into a plastic bag, stuffing the animal’s nose into the corner of the bag, then firmly grabbing it to present to the rest of the group to sex it. I hesitated too long, stuffing an Antechinus‘s nose in a little more than I needed to, its eyes closing and body struggling for breath, the professor gently goading me to just pick up the animal. Who in their right mind picks up a wild animal with sharp teeth without any protective gloves? NOT ME. Another strike against the stupid American, not willing to risk a bite from Australian wildlife. Another student was bitten. Not an American. Our days always started early, winding down easily as the sun began to fold into dark. Pademelons, which look like tiny kangaroos, would hop noiselessly by our tent at dusk. We enjoyed multicolored sunsets, hanging with humidity from the daytime and sinking away into cold, star-filled nights. We peered along the Great Dividing Range at its vast expanse and wondered how long it would all last.

It still lasts in my old photographs and in my mind. The colors of Australia remind me often of the red dirt of Georgia and the dark humus of Illinois And this chocolate buckwheat granola recipe dotted with rust-red dried cherries remind me of those colors too. The sunsets folding orange into black, with bits of brown. This granola travels well, can be made for vegan and gluten-free friends, and can satisfy a chocolate craving. Forget the store-bought chocolate granola: it’s loaded with sugar. Mine is miles better, as far away as Australia. Marsupial mice may like a taste, if not a perfunctory nip on your finger first.

Save Print
chocolate-cherry buckwheat granola recipe
Author: story of a kitchen (very heavily adapted from/inspired by my new roots blog recipe)
Recipe type: healthy snack
Prep time:  15 mins
Cook time:  1 hour
Total time:  1 hour 15 mins
Ingredients
Instructions
Notes
* Method 1: Toast hazelnuts then remove skins-- 1. Toast in a hot, dry pan, stirring until skins darken and there is a nutty smell. 2. Cool slightly and rub vigorously with a tea towel. Skins will flake off. Method 2: Remove skins then toast hazelnuts-- I posted this method previously. Here it is again, from the CHOW discussion forum. ½ cup hazelnuts 1½ cup water 2 tablespoons baking soda 1. Boil water and add in nuts and baking soda. 2. Cook for 3 minutes. Rinse a couple of nuts with cold water and test if skins easily slip off. If not, cook for another 2 minutes. 3. Drain and rinse with cool water. Remove skins with your fingers. Allow nuts to dry some; using a towel to help is fine. 4. Toast in a 350 degree F oven for 10-15 minutes. This may take longer (or shorter) depending on your oven rack position and thickness of pan, so watch carefully. Use your nose to test doneness. The sweet, roasted aroma of the hazelnuts will waft into your kitchen.
Wordpress Recipe Plugin by EasyRecipe
2.2.6
If you love this, share it!