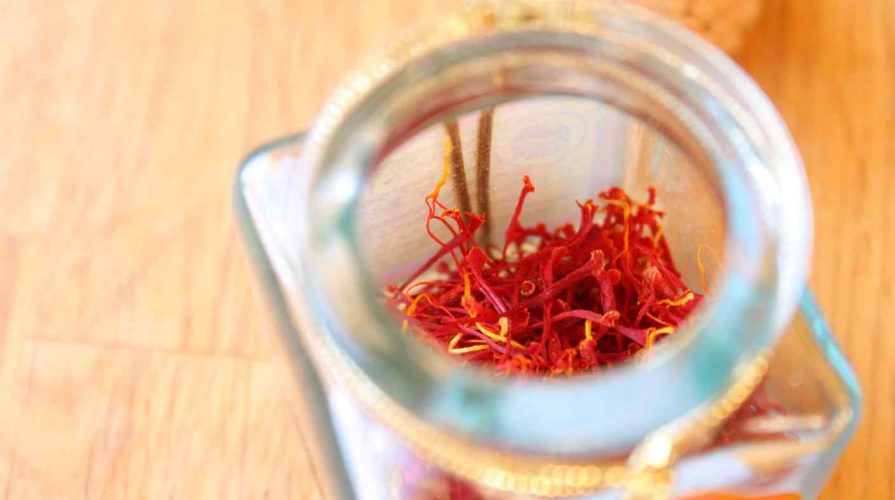 saffron and shame: a lesson on etymology :::: Saffron reminds me of so many different cultures and experiences: the robes of Thai Buddhist monks when Eat and I visited my parents when they lived in Thailand in 2001, the color of paella in my trip to Spain in college, the color of some Maine summer sunsets growing up. Not only is it the multi-cultural connectedness that attracts me to saffron, but its vibrant color, scarcity, and holy history. Saffron threads are the stigmas (the part of the flower that receives the pollen) from the Crocus sativus  flower. It is curious that stigma also means a mark of disgrace or a stain on one’s reputation, as if this spice somehow branded the spice world with an unwanted mark. In Greek, stigma  means “to tattoo” which I surmise was an observation by a wordsmith after fondling some of the crocus plants. I imagine many a Greek touched those tender stigma, fingers stained with orange. It is often etymology that leads me to appreciate certain word origins. One clear memory outside of the food world was in medical school when learning about the pelvic nerves. The pudendal nerve is a sensory and motor nerve that innervates the external genitalia. It is a form of the Latin-derived word pudendum,  meaning the external genitalia. We learned in our anatomy lecture that the holy men that first studied and named these nerves long ago, monks or priests, named this part of the body from their narrow and taboo context: pudendum  means to make ashamed. So enough about genitals and embarrassed monks and onto the sultry saffron. These crackers use just a bit of saffron; a little goes a long way, otherwise the dish will be bitter. Although I have used saffron powder before in my saffron sables recipe and can be used here, it is preferable to use the saffron threads as they have longer shelf-life. The threads do need a little extra attention though (perhaps much like genitalia, in some circles): once plucked from the flower, the threads need to be dried and/or soaked before using to appreciate the fullest flavor. Much like my oatmeal crackers, these crackers are just as tasty and might make grocery store crackers obsolete in your cupboards.

This recipe is from the wonderful Fran Gage (I posted her pork rillettes recipe in 2011, slightly altered), from her book New American Olive Oil. The book does not disappoint!

One year ago: mixed bean soup

Save Print
saffron and fennel seed crackers
Author: story of a kitchen (adapted slightly from fran gage's New American Olive Oil cookbook)
Recipe type: healthy snack
Prep time:  1 hour
Cook time:  15 mins
Total time:  1 hour 15 mins
Excerpted from The New American Olive Oil by Fran Gage © Stewart, Tabori & Chang, 2009.
Ingredients
Instructions
Notes
* Why not start preheating at the start of the dough assembly, rather than starting the oven mid-assembly and have to twiddle your thumbs during the preheat (or clean up your mess in the kitchen)? The rest period after the dough is mixed is important. The rest period allows the dough to relax before rolling out. If not relaxed enough, the dough will resist your rolling and not be thin enough to crisp up in baking. Chewy crackers are not the goal.
Wordpress Recipe Plugin by EasyRecipe
2.2.6
If you love this, share it!