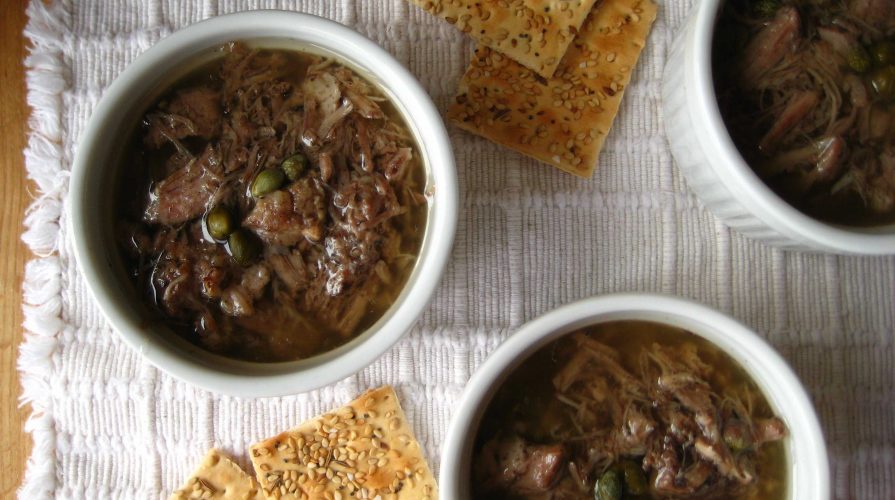 pork fat and olive oil carry the flavor, the capers go along with the ride :::: Ugh. Almost over that nasty cold and laryngitis. I can taste and smell again.

Growing up in the Midwest, I have a long-standing love for pigs. I went to a college surrounded by pig farms and soybean fields. Known for being the site of the fifth Lincoln-Douglas debate, the hometown of the renown poet and author Carl Sandburg, and an important railway stop in the late 19th century, Galesburg is surrounded with dilapidated barns and fields striped with gold and green.

Home from college one summer, I found myself suddenly yearning to go back to the dorms one humid night while walking around in my parents’ neighborhood, far from my college campus. My trigger wasn’t the university tests plots nearby, or the clickity-clack of the Amtrak train in the distance. Not even the book of Carl Sandburg poetry sitting on my nightstand from the library. No, it was the visceral, meaty stench of PIG from a nearby farm on the outskirts of town. Some might have olfactory triggers of a boyfriend’s cologne, a grandmother’s favorite apple pie. Mine just happens to be smelly hog. And so this pork recipe found me jumped out at me from the pages of Fran Gage’s The New American Olive Oil cookbook recently, on the (curly) tails of a nostalgic moment from college. Never heard of a rillette? Neither had I until I found this recipe. It’s a wonderful alternative to a pork chop, dip, or party food — all rolled into one. I know the header photo is, well, ugly. It doesn’t do justice to the flavors. I even tried different lighting and fancy tablecloths but no difference. This pork just isn’t photogenic. Don’t let that scare you away. I challenge you to not sneak a bite of the cooked meat before shredding. I totally did. Multiple times. No shame. You need a four hour window for cooking time so plan accordingly.

UPDATE 11/19/11: I scaled up the recipe with 7 1/2 pounds of pork, using half of the olive oil and not using the capers. It was a success with a crowd. I did not pack into crocks or ramekins but presented my group of eaters with two large pans of meat, to serve themselves. Eighteen people (some being children with fair appetites) polished off most of it.

Save Print
pork rillettes with capers
Author: story of a kitchen (minimally adapted from The New American Olive Oil cookbook by Fran Gage)
Recipe type: meat
Excerpted from The New American Olive Oil by Fran Gage © Stewart, Tabori & Chang, 2009
Ingredients
Instructions
Notes
* Use small ones if serving individually. This is very rich.
Wordpress Recipe Plugin by EasyRecipe
2.2.6
If you love this, share it!