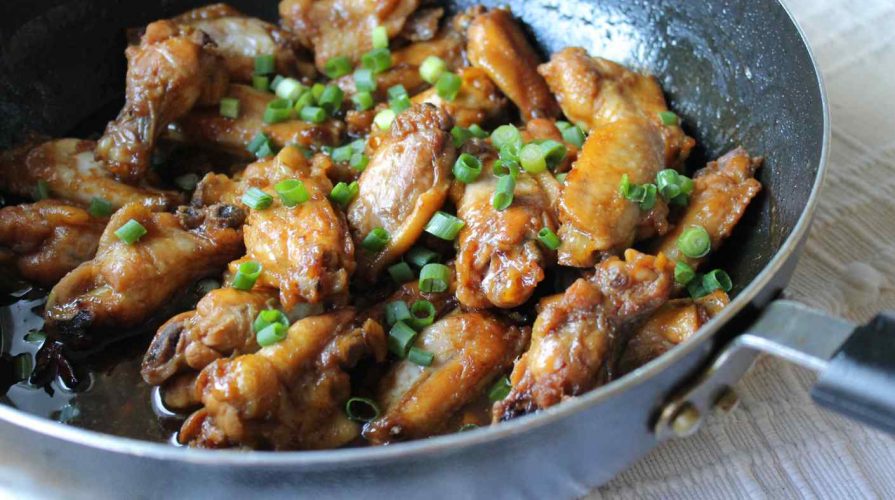 totally at the behest of my husband :::: When Eat and I lived in Chicago, a Korean fried chicken place, Crisp,  opened up near our home. The chicken wings, any flavor, brought us back more than once, fingers sticky, sauce on our cheeks and under our fingernails. It was the Seoul Sassy sauce, however, that really pulled us in: gingery, salty, and sweet, like a kalbi  marinade exploded over some KFC. We’d almost have to plan when we went there, expecting that I’d dribble sauce on my invariably white shirt or Peach would end of with most of it on her face, fingers, and every article of clothing.

Saucy chicken is hard to beat. It’s not that I didn’t see the value in today’s recipe, or in its efficiency, or the overall flavor profile, but it was my husband who convinced me to make these one-pot sticky chicken wings one night, and I initially did so begrudgingly. A contribution to Food & Wine  by Andrew Zimmern, host of television’s Bizarre Foods,  and host of Eat’s idea of a dream job. It was a last minute decision, coming together without much planning needed. It reminded me of those wonderful fried Korean chicken wings, even with a different flavor profile. And Eat wolfed them down just like that Korean fried chicken, dribble free. I can’t say the same for Peach or Grub.