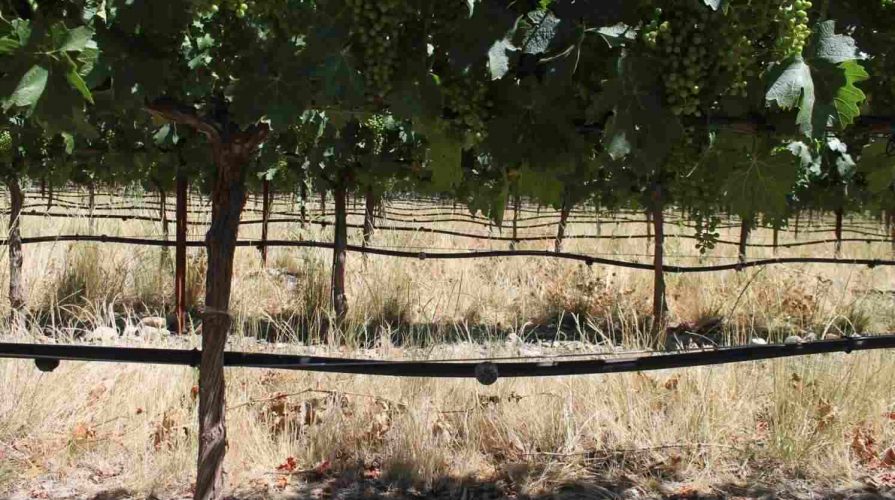 so early lured by napa to think that wine is a food group :::: Let’s skip the recipe for today and take a different tack into the sea of food. Just adults. Alone.

Last month, Eat and I spent a splendid weekend away from the kids in Napa, enjoying fine wine and expensive food. Last time we had a real vacation there, we brought them along. The weather was perfect, as it is in Northern California most of the time. We sampled marvelous food from Etoile, Mustard’s Grill, and Meadowood . We saw sprawling vineyards in every direction.  The sky was cloudless, the breezes cooling, and the company lovely. I could go on and on discussing the colors, scents, and socializing. I’ll hit some highlights. Friday night, after a rush hour traffic headache, we made it to the serene Etoile  at Domaine Chandon for dinner. By far the highlight and underdog of the night: the oxtail aspic. Who knew you could taste so amazing? I mean, you looked so … brown and boring. You were way more exciting than the ribeye. I ordered the aspic on the whim for the first course and was more than pleasantly surprised. I wanted to run home and make some brothy gelatin and not share.  My pear mille-feuille dessert equally exciting, though I was a little full to really appreciate it.

Mustards Grill was our Saturday brunch. While I gooped up on cocktails like the Fresh Pear Sidecar and the Smokehouse Sour, Eat dug into one of the best porkchops he’s ever eaten. I had something to eat, too, but my drinks were way prettier. they served bread on the table -- without a plate -- at mustards grill. exactly what i would have done. Eat’s pork chop was crazy good. He is all over pig meat, especially when it’s featured in this dish on Food Network. The waiter told us that they sell some ungodly number of pork chops per month. My Pear Sidecar started taking effect at that point in the conversation so I have no recollection of the actual number that he quoted.  See the next photo? The drink is gone. My Smokehouse Sour was on its way. pork chop love all around

Next, we had a private wine tasting at Black Stallion Winery (highly recommended you talk to Josh!), a tour, and carried home four bottles of wine. The included a stroll through the winery’s educational vineyard, where we saw the delicate nibs of baby grapes. We also walked through the cellars, the casks smelling of forest and grapes. And we both smelled like wine. Seeing as we are both lightweights after a little alcohol, we headed to the hotel room, watched TV, then headed to dinner at the acclaimed and idyllic Meadowood.  This is where I was a little disappointed. Don’t get me wrong: the ambiance and the food were great, but for the amount of money we paid for a dinner like this, I expected as close to perfection as possible. And I know  it was possible. Let’s start with the yogurt. Something as simple as this was actually one of the highlights. Greek yogurt, salt, black sesame, candied buckwheat rocks, with chopped shiso presented on a meadowy and woodsy bowl and plate. And rocks! I felt like I was sitting on a forest floor eating — and it didn’t taste like dirt! Eat and I agree we could eat this for breakfast every morning. At first glance, it looked like a bowl of moss and weeds, as if we were to chew on a patch of grass like a cow. I can assure you even the most meat-eating of people could be converted with this dish: the salt, sweet crunchy buckwheat, creamy yogurt, and delicate basil-mint flavors of the shiso balanced beautifully. The photo does not do it justice. To sustain the image in your mind, no doubt bettered by the description of taste, there is no photo to show. My next favorite: warm early summer salmon confit. You were AWESOME with your crispy, crackery fish skin, smoky flaked salmon on the side, salmon belly butter, your roe all cute and roly-poly salty on the plate, green tomato caviar and early peaches giving you a nice balance. You are almost perfection. Does Heaven serve this?

Another winner: Veal and trout roe. I did not take a photo of you, but you were so lovely. The buttery veal with the fishy salty pops of the trout roe was a great combination. A photo in the darkened lighting would have not done you justice.

I go on and on about the wins here, but here is the fail. It’s not so much the food but the presentation.

A week prior to the restaurant, they called and asked Eat about any food allergies. Although we have none, I opted for the gluten-free menu. Why not?  I thought. It will be interesting to see how they accommodate.  I’ve recently been reading some of the Gluten-Free Girl’s food blog. If you have not read her story, take a glance. She is a writer by training and it shows: her blog posts are beautifully crafted, inviting, as if you are reading a letter from a faraway friend. Wanting to also capture some of her positive attitude, and her creativity for menu planning for potential guests with allergy issues, I thought I’d give it a go on gluten-free, undoubtedly top-notch, at Meadowood. They are Michelin rated. They are located in one of the most beautiful parts of the world. There are fresh, local ingredients within miles of the restaurant. I couldn’t see how it could be difficult to accommodate. one of the many cute, tiny radishes on my plate

Rather than replacing each part of the course so that I was totally gluten-free, there were omissions. OMISSIONS. For instance, there were four courses that were served with a roll of bread, only one of which I was given a replacement gluten-free bread. Eat also received a course (the geoduck amuse bouche) for which I did not have a replacement. It was brought out when I was finishing our previous course. There was effort to de-gluten my serving when wooden box of mignonards was brought out for part of dessert. While I was served with essentially the same, but de-glutened, delights as Eat, it was served well AFTER he had finished his. I can understand if I had waltzed into the restaurant requesting a gluten-free menu on the day of our reservation that there could be some frenzy behind-the-scenes, trying to create an appropriate menu so quickly. However, I think it is inexcusable for a three-star Michelin rated restaurant with a WEEK’S notice to omit portions of the meal and serve them out of sync with tablemates. Come on. Not that the whole experience was a fail: it most certainly was an amazing meal, unrivaled by many I’ve had. I’m just disappointed with the restaurant’s impeccable reputation not quite living up to my expectations and facing reality. And shelling out a lot of money surrounded by that disappointment merely amplifies it. Knowing that we had more food to taste, I moved on to our next meal: Sunday brunch. Our last meal before heading home was at one of the many Thomas Keller brainchilds in the area. Ad hoc is causal, like your stuffy restaurant put some jeans on, drank a beer, and still served you high-end food. the famous ad hoc pig glowing in the corner

We had the perfectly seasoned rock shrimp ceviche with melon and iceberg wedge with prosciutto and lime agave dressing: Our main course consisted of Huevos Rancheros with spiced beef (no photo as I just couldn’t get the lighting to make it look pretty). And we couldn’t go wrong with the finish of fresh churros with cinnamon-chocolate and caramel sauces. So much better than Costco churros! All in all, it was a wonderful trip. Eat and I focused on each other, on the food, and drank more wine than we have in months (4-5 glasses for us)! Taking a break from the kids is always refreshing, but we were both very ready to get home and see our babies at the end of the weekend. For now, we’ll enjoy some of the wine we bought, amidst the kids’ quick succession of giggling, crying, and screeching at the end of a long day. Life.