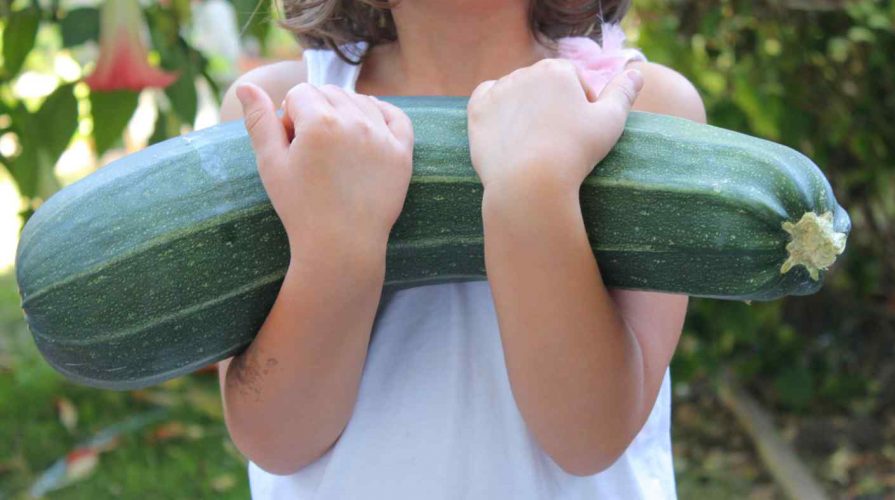 so what does one do with a monster zucchini? :::: Peach and our giant zucchini gift, 2013

A friend who knows about my blog habit presented a 5 pound 9 ounce zucchini to me last year, knowing that I would know what to do with it. Honestly, I don’t always know what to do with mega vegetables (the cucumber I received simultaneously remained in my crisper for well over a month, then turned to an oozy mush), but like the challenge of figuring something out.

And so I did with this largess, the oft castoffs from late summer gardens after the young zucchinis have graced many a summer dinner table and when home gardeners have become lazy in checking their bounty. Laziness leads to overgrowth of weeds and zucchini alike. And possibly some traumatic memory of an overgrown zucchini stuffed with sausage and onions that tasted bitter, seedy, and raw.

It was my attempt at recreating from memory a sausage-stuffed zucchini that scarred me. As a child in England, I spent a weekend afternoon at my friend Emma’s home, mucking in the garden, eating sweets, and working up an appetite. Her elderly neighbor gave Emma a large zucchini, a courgette, she called it, that day, extolling the beauty of stuffed zucchini. Emma promptly flew with this idea and I watched her stuff each half with sausage and bake it. I had to leave before it was done baking, the smell of pepper and fennel seed filling my nose and making stomach rumble.

It was that smell that I always remembered, over 20 years later. When I tried to recreate this recipe, surely partly misremembered in ingredients, cook time, and how good I assumed it tasted, I failed miserably. My zucchini, pork, and onions were all undercooked in the middle, but burned on the outside. I couldn’t even eat it. It was almost as disappointing when I tried recreating my grandmother’s canned tuna-potato chip casserole that I liked so much as a child. That was a hot mess.

Size really does matter here. The larger your zucchini, the more coarse and tough it becomes. Scraping out the seeds en masse (too chewy to enjoy) and using the zucchini as an adjunct ingredient is a better course than trying to make it the star. For instance, uses for a five pound zucchini includes mostly dishes that incorporate shredded bliss and putting it into soups or pasta sauces. Round out omelets or frittatas. Make zucchini bread. You know, the obligatory stuff.

What I did last year was change it up a bit. I made latkes. I tried a whoopie pie recipe. And I even made a fabulous chocolate zucchini cake. I’m calling this month the Month of the Zucchini. I’ll post each of these recipes for your zucchini needs. Not a bit will go to waste!