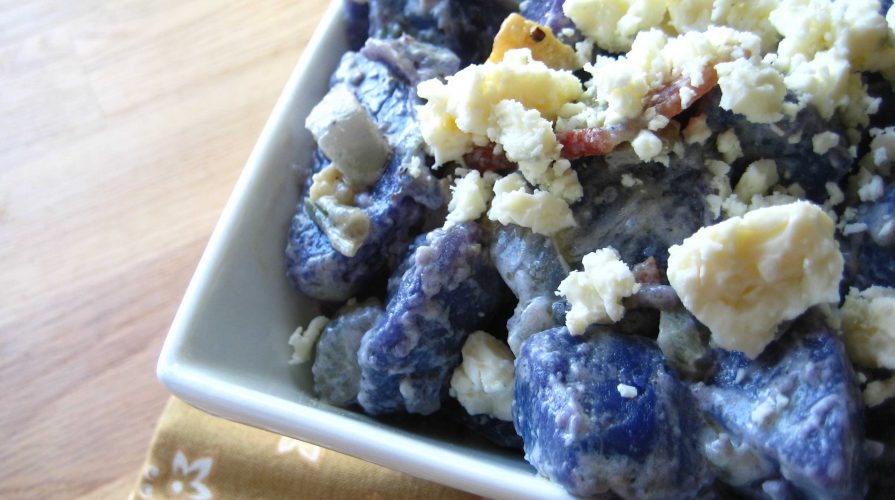 purples and blues in a whole new way :::: Joblessness has afforded me three things: 1) impeccable dental hygiene; 2) an uncanny ability to recite, from memory, the items in and position of said items in my pantry; and 3) getting to know my neighbors on more than just a “hello” basis. As I brush, floss, fluoride rinse, and rinse again, I often consider my options. I have a pound of dried garbanzo beans on the second shelf of the cupboard to the right of the stove and a bunch of fresh Italian parsley in the crisper. There are four pounds of purple potatoes waiting to be mollycoddled. Gorgonzola in the cheese drawer.  Maybe mix in some salty bacon and we’re in business for dinner! And we’ll have guests! We are lucky that we have friends living mere steps away. Growing up, I remember this was commonplace in our neighborhood. Kelly, two years older than me and front-yard gymnastics mentor, lived diagonally and across the street. I’d just skip down the street and ring her doorbell, often greeted by her always sunny mother or friendly father. Except when the HUMONGOUS Golden Garden Spider that I was convinced was some direct relative of the Black Widow sat next to the doorbell, then I ran quickly home.

Debbie and Brandy’s grandmother lived across from Kelly, and they often visited. I would often ring their grandmother’s doorbell, greeted at the screen door by her asthmatic dog Ben, part chihuahua part pug, barking and wheezing the longer I stood waiting. The more I waited, the more aggressive the wheeze. I was convinced that I would watch him die one day, gasping for air, as Debbie’s and Brandy’s grandmother stubbed out her cigarette before answering the door. Behind us lived my brother’s friend Clay, enveloped in a cloud of Star Wars action figures and a booming, almost socially-inappropriate laugh that always stopped me in my tracks.
We may not have such colorful neighbors now as I did when growing up, but color we have in our homes. These purple potatoes certainly can brighten a kitchen as my childhood neighbors brighten my memories. Placing such brilliant dish on the table provokes immediate conversation, as it did when I served it recently to some dinner guests. Some of that conversation can be used to cajole suspicious children to taste the salad. Convince them it is otherworldly, it is “space food” or “dinosaur food.”  You can also convince adults of its otherworldliness with the blue onions. No, not purply-red, actually blue.  If you want to get a head on start on prep, cook the onions and boil the potatoes (with skins on) as the recipes cites. Cool the potatoes slightly to skin them, cut into bite sized pieces, add the salt, pepper, and olive oil while still warm, and mix in the onions. In hours (and even overnight), you will have the brilliant amethyst potatoes dying your translucent onions a neon blue. A step further: add the mayo and you’ll have a lilac-colored mayo coating on your potatoes. If you want to forego the bacon for vegetarian guests, add a little more salt. My salad may not be quite as colorful as my childhood neighbors but it comes a close second.
Save Print
purple potato salad with gorgonzola and bacon
Author: story of a kitchen - inspired from Food & Wine magazine
Recipe type: salad
Ingredients
Instructions
Notes
* Meaty is better than too fatty. The fat will be crisp to start but as the salad sits, it will become softer. This doesn't affect the flavor but I find the consistency change distracting. Using pancetta is a noble substitute. Crispy prosciutto or speck may even be better. ** If you want a lighter purple salad, peel then boil the potatoes. (And your onions won't be very blue.) If you leave the skin on with boiling, the potatoes retain their brilliant purple color. *** Careful with your choice: don't use a blue cheese with too much of an ammonia bite to it. It will ruin the whole dish. Ask your cheese seller for a mild blue cheese, without the ammonia.
Wordpress Recipe Plugin by EasyRecipe
2.1.7
If you love this, share it!