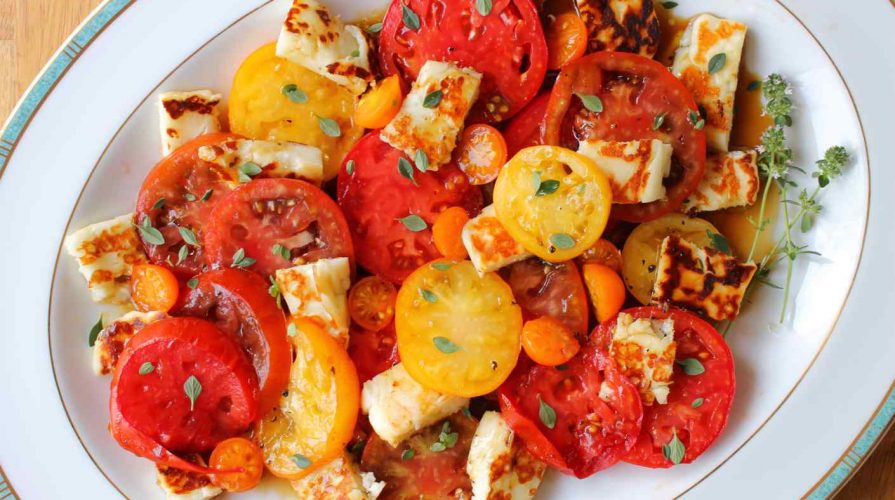 &*%^$! Not again!   I thought. I did not say aloud what I actually thought. The snails got my pepper plants. Again. It’s the third time.

Last year, I planted some pepper plants from seed, seed that I had harvested from some wonderful sweet, red curly peppers highlighted in my goat cheese-stuffed red peppers and topping my red pepper quiche in ringlets, hoping to cultivate a small but respectable patch. Immediately, despite my large planter pot, bird netting, and use of copper tape around the pot to prevent snail intrusion, two of the plants were chewed down to the nubs and the other one was barely upright. Not a snail in site, but my suspicions were that it was a pesky mollusc that gobbled up those tender leaves. I gave up last year, not willing to start from seed again, nor interested in coaxing a seedling from the local plant nursery to grow so late in the season. the mountain view farmers' market overflows with tomatoes, as does my garden

This year I bought those seedlings, early season, ready to go, roots ready for a vast expanse of nourishing soil in which to be planted. My set up was the same: those pots, the copper tape, the bird netting. Convinced I was that perhaps last year’s seedlings were merely too  tender, fragile to withstand the onslaught of snail hunger, I bought the seedlings in confidence, that this year, yes, THIS year,  my garden would be a fortress against any trespassers. I planted and netted those seedlings with visions of fiesta-red peppers later in the summer. I wandered out to the garden the next morning before work, a gray sky, quiet. As I often do, I inspected each plant. The tomato plants flourishing with pearls of green, leaves and yellow blossoms smelling spicy. The mint overflowing. The basil and sage runneth over their pots. The lingonberry bush is just starting to sprout more leaves looks lush and stout. And the peppers look — wait, GONE! One plant, again,  being chewed on THIS VERY MINUTE by some fat, slimy snail, while the other is pock marked with the stigmata of snail feed. My immediate strike: to dump salt on each one of them, watching them shrivel in terror.

Knowing this salting wouldn’t forever deter the flock of snails still hiding throughout the garden, I came up with a plan. I got mean. To entice them into my trap, I used snail bait/poison from the garden store, sprinkled like candy next to my pots one night. A new seedling, planted. All plants watered. this tomato has creepy fingers...scaring those snails, perhaps

It was a snail genocide the next morning. There were dozens of them littering the garden, more than I expected. The brown patterned shells upturned, stilled, and most practically lifeless on the dirt next to my large pots of tomatoes and peppers. And there they remained for days, as the birds picked at them, shells bleaching in the sun.

I felt no remorse in my accomplishment, that deliberate razing of that snail population, a wild rush of adrenaline at this sight, an evil laugh erupting in my head, with my quiet verbal Yes!  not loud enough for the neighbors to wonder what excited me at that moment in the garden. I was victorious. I had foiled that invertebrate, the garden snail, the Helix aspersa,  keeping it from befouling my garden and chewing it away to shreds.

And now that I have dedicated an entire post on my crusade, finally triumphing over the mollusc, it just sounds so PATHETIC. Human versus snail: human finally wins after many trials. Evolutionarily, you’d think it would have been the human conquering the snail much sooner and without so much trial and error.

I thought making some escargot along with the salad in this post very a propos,  but perhaps too wicked. There might also be some confusion on where exactly I obtained the edible snails, some readers assuming the worst, thinking I plucked them from the garden and cooked them up like some creepy, raging beast.

So I went with the vegetable slant. The tomatoes, the peppers, some of the herbs. After all of that drama, the queen protecting her spoils of vegetables, tending them so carefully, I give you a sweet tomato salad with salty halloumi cheese and the strength of a pomegranate molasses drizzle. No peppers yet, though they have flourished more this year than any other pepper plants. And the tomatoes are certainly holding their own with my ultra-sweet cherry-sized orange Sungolds, the Lemon Boy yellows, a Japanese purple (which was actually more maroon colored), and some beefy reds. No match for those snails. Ha! One year ago: spaghetti squash browns

Save Print
tomato and halloumi salad with pomegranate drizzle recipe
Author: story of a kitchen (adapted from Sunset magazine, June 2011)
Recipe type: salad
Prep time:  10 mins
Total time:  10 mins
Serves: 2-6
Ingredients
Instructions
Notes
* What else can you use pomegranate molasses for? It's great mixed into seltzer water: it's a homemade tangy, caramelly soda drink.
Wordpress Recipe Plugin by EasyRecipe
2.2.6
If you love this, share it!