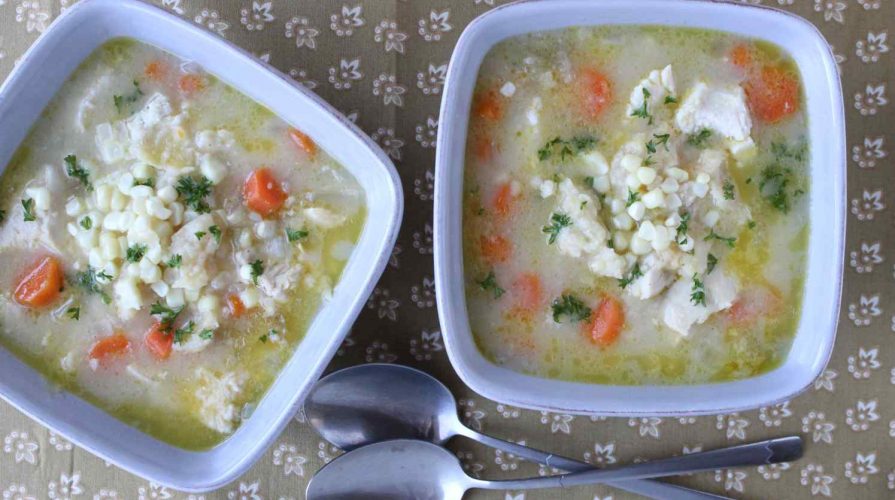 absolute chicanery. or chickenery. or something. :::: Sometimes goodness does not exist in its pure form. Rather, it can be made into soup, with all sorts of other flavors, goodness exponentially increased. Kris Delmhorst, folk-rock goddess extraordinaire, adapted the popular folk tune Cluck Old Hen  on her CD Five Stories. I had the fortune of seeing her perform live in my hometown years ago, in early spring, when snow had melted but the wind was vicious. She explained her inspiration for the song was after tending chickens. She often sang to these chickens as they quietly roosted. She knew when she achieved chicken song nirvana when those chickens did one thing: their eyes would slowly roll back into their heads, like they were experiencing some sort of avian heroin, like nothing else in the world mattered. She was a joy to see live, doing a show with Deb Talan and Steve Tannen (pre-Weepies) and Mark Erelli. They all hopped in to do harmonies for each other, a musical cross-pollination that blew the audience away. For me, this show was pretty close to perfect. I wanted to buy every CD, every t-shirt, they had on sale. No chicanery here. But there was chicken. Not only did Kris sing Cluck Old Hen,  I welcomed warm soup that weekend. It was not uncommon that a chicken carcass, picked clean from a roasting, would find its way into a pot that winter or spring, its destiny to make some sort of soup. I made numerous soups that year, and since, breathing in the aroma as the bones cooked and mingled with the flavors of added carrots, onions, celery, and whatever else needed to be used up, straining it into a large bowl, and awaiting the overnight chill in the fridge to judge the degree of gel. To me, the more the gel in the stock, the better the taste. If my stock jiggles, I am a happy woman. But that process sometimes gets a little tedious these days. Time gets away from me with Peach and Grub to chase. I just want to make some soup. Am I going to take the time to cook these bones for hours? After studying this chicken corn rivel soup recipe, I knew that I had to make tweaks, some little cheats. Chicanery, if you will. Or is that chickenery?

The original recipe said to make the stock with chicken thighs, then “reserve the thigh meat for another use.” Why would I make CHICKEN stock for CHICKEN soup, then use the meat for ANOTHER USE? I considered making the stock from the thighs as directed, then using that meat for the soup. However, I also wanted to make this recipe a little easier with a little less hot stove work in the summer, so I opted to skip the thighs altogether, only use the suggested breast meat for the soup, and used canned broth for the soup.

Chicanery, I tell you. And that’s okay. The salty stock, the sweet corn and carrots, and the chicken give the soup the comfort food vibe all the way. But the browned butter in the rivels and dribbled on top of the soup? DO NOT OMIT. Browned butter takes the soup to another level. The chickens Kris Delmhorst tended may have hit nirvana with her singing. You will hit it with this soup, browned butter a must.

Save Print
chicken corn rivel soup with browned butter
Author: story of a kitchen (adapted from America's Best Lost Recipes)
Recipe type: soup
Prep time:  30 mins
Cook time:  60 mins
Total time:  1 hour 30 mins
Serves: 6
Ingredients
Instructions
Notes
* The original recipe said to use only 2 tablespoons of butter and 1 yolk with 1 tablespoon of water. I felt the mixture was too grainy and wasn't coming together, so I kept adding the melted butter, then another yolk, and a little more water until it looked more like a dough. I read different versions of the recipe to decide what the dough should look like: some is crumbly, some is more sticky. I went for the kind of crumbly but sticky dough. ANOTHER IMPORTANT NOTE (also detailed in my post): The original recipe said to make the stock with chicken thighs, then "reserve the thigh meat for another use." Why would I make CHICKEN stock for CHICKEN soup, then use the meat for ANOTHER USE? I considered making the stock from the thighs as directed, then using that meat for the soup. However, I also wanted to make this recipe a little easier with a little less hot stove work in the summer, so I opted to skip the thighs altogether, use the suggested breast meat for the soup, and used canned broth for the soup. Any broth will do, but I caution against "full sodium" canned broth as you may end up with a very salty soup. You could try one can of full sodium broth, then use water to make up the difference to 2 quarts of liquid. It's best to cook with less salt in the beginning, then add more after all soup components are in the pot.
Wordpress Recipe Plugin by EasyRecipe
2.2.6
If you love this, share it!