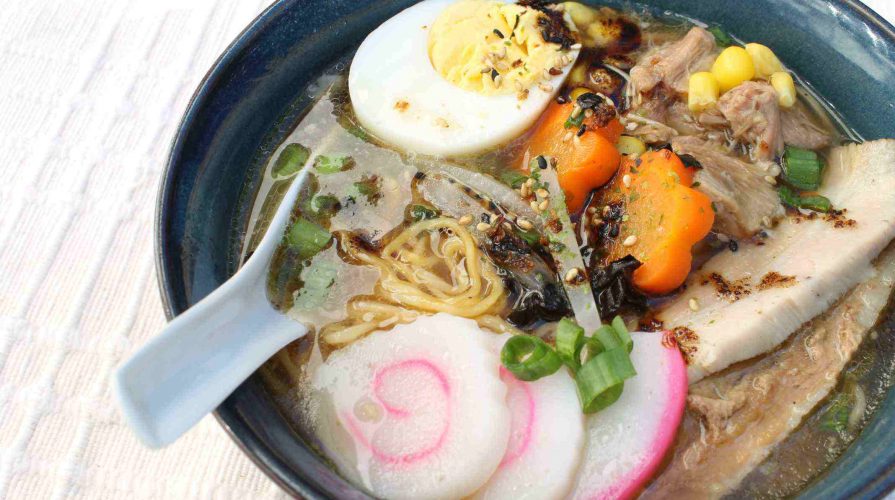 Japanese cooking is all about appreciating the separate but linked components. It’s not simply throwing a pound of meat into a screeching hot pan with ginger and garlic. It’s not the steamed rice soaking up some sauce. It’s about carefully tending to each part: slicing the fishcake just so; boiling the perfect egg; slow cooking the pork belly in sultry mix of ginger, garlic, miso, and mirin; wrapping sashimi in a blanket of nori and Kewpie mayo, like a gift. When I noticed this deliberate focus on each part, and then their careful placement into each dish, I knew how to cook Japanese food better. I don’t do it enough, but at least I have a foundation. Tonkotsu broth is my epiphany to Japanese soup love. A miso broth isn’t bad. A thin chicken broth works in the right situation. But when you step over to the tonkotsu broth side, you never go back. It’s creamy, it’s meaty, the depth of flavor after long hours of cooking chicken and pork bones catches one’s attention. I could easily drink the broth on its own. But the soup components: the perfectly boiled egg, the fresh ramen noodles, the buttery pork cheek bathed in perfect flavors, the ruffle of woodear mushrooms, the blaze of pink-colored fishcake, the drizzle of bitter black garlic oil, a few rows of fresh steamed corn fresh of the cob, and the delicate sprinkle of scallions on top — my comfort in a bowl. Every bowl of ramen is different, even those of us irrevocably in love with tonkotsu broth. Some like the bitter garlic oil, some don’t. The woodears may grace your bowl, or not. Maybe you are the kind of person who isn’t a fan of the cute fishcake. Whatever your likes, it’s still about the sum of its parts. Greatness in a bowl. Our “Japanese soup” as the kids call it, is always a favorite for dinner in our household, Peach favoring the egg and Grub loving the noodles and fish cake. Slurp away, people, it’s only polite.

Some of the details for success:

– DON’T use dry ramen noodles, the ones that cost pennies. Yes, they have their time and place. In a stupendous bowl of ramen that will change your life, they need not apply, sorely underqualified for the job. Seek out fresh ramen noodles in an Asian grocery store, usually found in the cooler sections near tofu and fish balls.

– DO have a large pot and a day at home to tend to the broth. As it cooks down, you may need to top it off with some water to immerse the bones again.

– DO prepare what you can ahead of time, so assembly just before serving is more streamlined. Boil the eggs and cut the steamed corn off the cob the night before. Chop the scallions. Chop the woodear. Slice the fishcakes. Prepare the black garlic oil while the soup is cooking.

– DO make substitutes if you don’t have all the components I list. There are endless combinations. Use fish balls instead of fishcake. Enoki mushrooms may be more your thing instead of the woodears. I like to be authentic, or at least close so the flavor profile is right, but you decide what you like.

You will be a convert. Those miso broths will never stir you like tonkotsu broth once you taste it.

I am not using the recipe plug-in for this recipe, appropriate because of the numerous components and recipes needed to create some of them. So here it is: the entire Ramen with Tonkotsu Broth recipe: the tonkotsu broth base is listed first, followed by the mayu  (black garlic oil), and the chashu  recipe. The final “Tonkotsu Ramen” section describes the assembly of a bowl of ramen with all of its components.

Tonkotsu Base – based on the norecipe.com foodblog recipe

makes about 20 cups of stock

– Fill a large pot two-thirds of the way with water and bring to a boil. Add the pig trotters to the boiling water and cook until you stop seeing red blood come out of the bones (about 10-15 minutes). The idea is to draw out as much of the gunk as possible into this first batch of water. Transfer the trotters to a bowl of cold water then repeat with the leg bones and chicken bones (you can use the same water).

– Dump the now gunky water down the drain and wash the pot. Scrub any dark brown scum off all the bones and rinse them thoroughly. Return the cleaned bones to the pot and cover with water (the water should come up an inch above the top of the bones). Bring the pot to a boil and skim off any chunks or foam that floats to the surface. Keep doing this until you don’t seen any more foam or scum floating up. This will take about 30 minutes.

– Once the stock is scum-free, add the caramelized ginger, garlic, and onions to the stock. Cover the pot cook for 5 hours (you may need to check and add water periodically, the bones should be mostly covered in water). Twelve hours is even better if you have the time.

– Discard all of the bones, picking some of the tender meat off. Remove any chunks of pork and set aside for soup presentation later. Strain the stock into a bowl and skim off any excess fat. If you don’t use this right away, it’s okay in the fridge for a few days and freezes well for about a month.

– Add the sesame oil into a small saucepan along with the grated garlic. Put the pan over medium low heat and let the garlic cook stirring occasionally until it is very dark brown. When the garlic is very dark, turn the heat down to low and let it cook until it is black.

– As soon as it hits black, turn off the heat and transfer the hot oil and garlic to a heatproof bowl. Let this mixture cool down completely. Add the cooled oil to a blender or food processor and blitz until there are no visible garlic particles left and the oil is uniformly black. (My food processor isn’t great, so I ended up with some bits.)

– It will taste burnt and slightly bitter, but this is okay as you only add a little bit to each bowl. Put it the oil in a container and refrigerate until you are ready to use it.

– Put all ingredients into water. Water should immerse almost all, if not all, of the meat. If not, add a little more.

– Simmer and covered at medium-low heat for about 1 hour. If it looks like the water is evaporating too much, add a little more water.

– When meat is tender, cool and remove from liquid. Chill – it makes slicing thinly for soup easy.

– This recipe makes a lot, so you will have extra. It freezes well.

– Heat the tonkotsu base in a sauce pan. In a bowl whisk together the chashu liquid, grated garlic, salt, mirin and white pepper. Add this to the hot broth and whisk to combine. Taste and adjust salt as needed.

– Split the cooked noodles between bowls. Pour the tonkotsu soup over the noodles.

– Top with chashu, scallions and whatever else you want to add. Finish the ramen with a small drizzle of mayu on top.