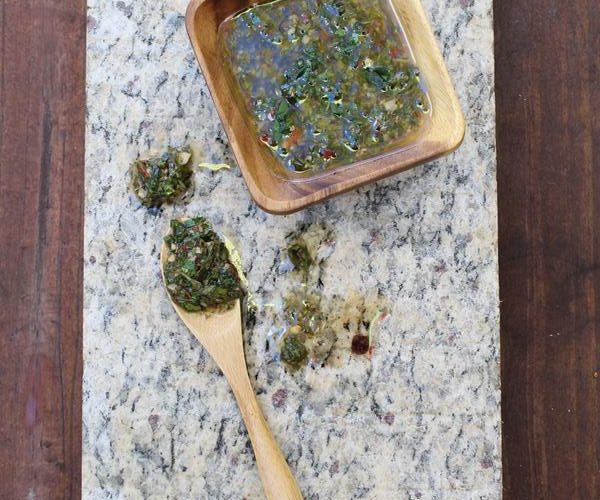 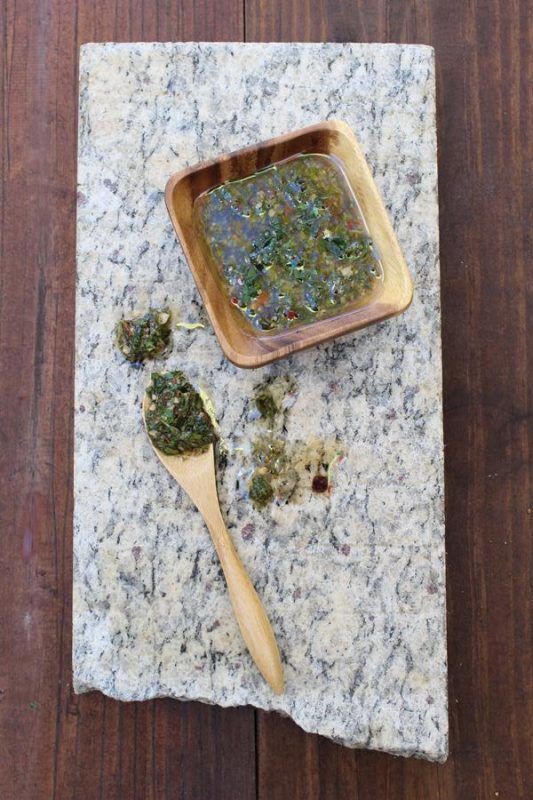 Rodan, circa 2003. The restaurant sat right off the Blue Line in Wicker Park in Chicago. I lived a block from the Blue Line’s Racine stop so I knew the line well — it was a direct route to the airport or almost made it to the lake depending on which direction I was headed. Whizzing through the open-air station often though never stopping to explore, Eat and I finally decided to get off at the Rodan stop (I honestly can’t remember the actual name of the stop) and try the place. Though touted as a lounge that turned up the music at night for a hip hangout, Eat and I were weary from medical school hours did not have the game or energy for it. We just wanted to eat and didn’t want to rush it.

I was intrigued by the grilled steak and chimichurri on the menu. I had heard of chimichurri but not tasted it before, a perfect piquant and verdant topper for earthy red meat or sweet grilled vegetables. Despite my inordinate time in the Anatomy lab, I wasn’t completely turned off by meat. Other classmates and I found after a few days of dissection work, our animal protein appetites came back and sometimes peaked while we leaned over a cadaver fiddling with a nerve or learning about a muscle attachment. Sick, I know.

Eat was surprised by my red meat order, not because of the Anatomy Lab work but my usual disinterest of it. But the chimichurri. That was kicker. Parsley, oil, garlic, vinegar, hot pepper flakes: It’s salad dressing for your meat. It’s basically a big meat salad without most of the greens. There is another version of the sauce, chimichurri rojo, that employs pureed red pepper, just as delightful as the version I’m sharing here.

I’ve found curious recipes with similar ingredients since then that instruct marinating the meat in the chimichurri, then cooking both together. First, chimichurri is not a marinade, it’s a sauce. Cooking it changes the flavor of the components, the herbaceous dulled and the vinegar tang more concentrated through the meat. This is an atrocity! Don’t do it! The raw brightness of the parsley, cilantro, and garlic are what makes this sauce work in so many ways. The vinegar and oil are meant to layer flavor on the meat, not infuse it.

Layer your life and food with different flavors, don’t try to mix everything up at once. Often hard to do these days. Stop at that restaurant you’ve eyed for weeks. It could be a meal game changer. It will forever be welcomed on my Thanksgiving table — our 2017 meal proved chimichurri is timeless and a new tradition. 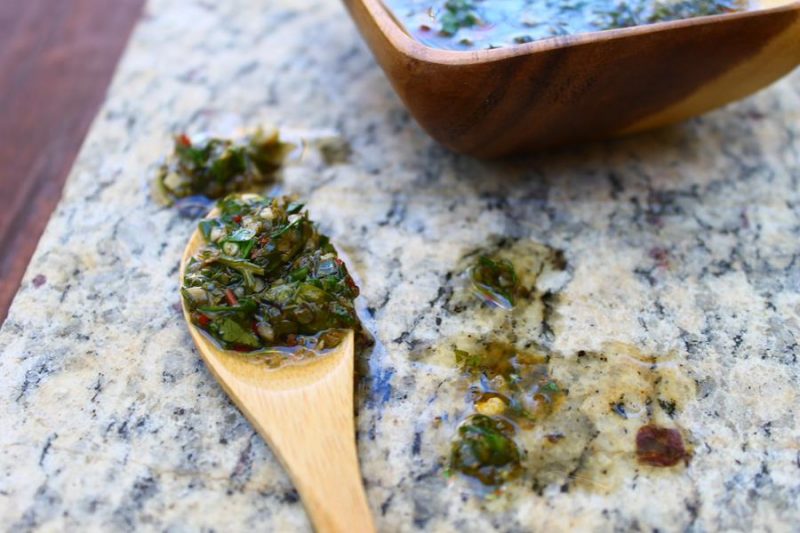 One year ago: salmon salad with roasted beets

Six years ago: breakfast casserole and pasta with pork, pine nuts, and olives

Save Print
chimichurri recipe
Author: story of a kitchen (from http://www.foodandwine.com/recipes/traditional-chimichurri)
Recipe type: vegetable / sauce
Cuisine: argentinian
This recipe is from Food & Wine originally by Michelle Bernstein. I've changed it slightly to use less garlic. The original recipe didn't specific dried or fresh oregano. I used dried without issue. The original recipe also says to whiz the mix in a food processor. It's easily whisked together if you don't have a processor. I also like a little bit of chunk to my chimichurri. This was one of the sauces I served with our 2017 Thanksgiving meal. It was a favorite and will continue to be a yearly addition.
Ingredients
Instructions
Wordpress Recipe Plugin by EasyRecipe
3.5.3251
If you love this, share it!