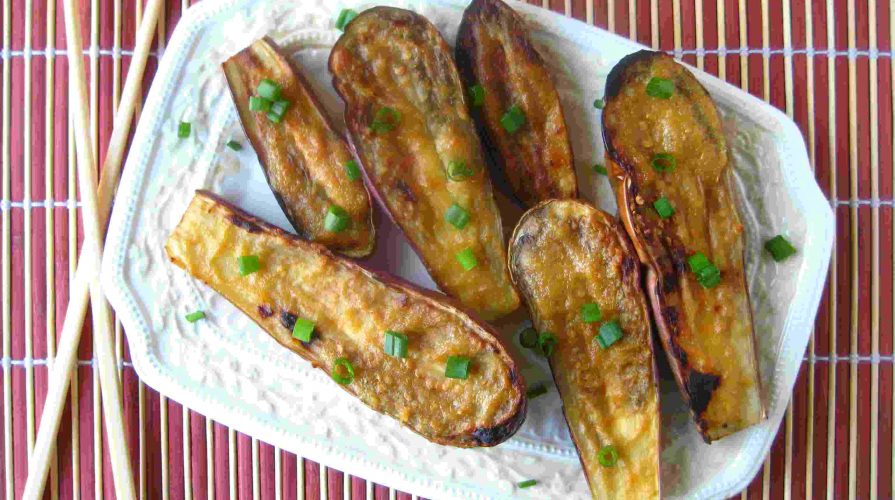 The dragonfly dipped and swooped over the asphalt, kissing its shadow quickly then alighting again over and over. Like a toy helicopter, it rose and swooped. This dance, so delicate, was almost soundless. For whatever reason as I watched this dragonfly, seasonally unexpected, I thought of my dainty eggplants sitting in the kitchen, gracefully donated to me from a friend with a bountiful garden. The eggplants were a perfect shade of purple, the smallest with the deepest hue I’ve ever seen on a vegetable, like the profound concentrated color of a syrupy port. They shone like the iridescent dragonfly too, narcissistically and playfully dancing with its shadow. What better than to showcase the beauty of the eggplants, than to have them do what they do best: soak up and carry flavor. Eggplants often get pigeonholed into Eggplant Parmigiana dishes of every permutation (skinned or not, fried or baked, ricotta or not, you get the picture). Try something other than marinara and Parmesan cheese: miso. A little unexpected in some circles, but a definite winner. And some ginger. And vinegar. Your new favorite. While you can use the hefty, large eggplants, the smaller Asian eggplants work better here. Easy to turn into appetizers and no need to peel. Sit back and enjoy the unexpected, much like itinerant dragonflies.

Save Print
miso-glazed eggplant (nasu miso)
Author: story of a kitchen (minimally adapted from Gourmet, August 2004)
Recipe type: vegetable
Prep time:  10 mins
Cook time:  10 mins
Total time:  20 mins
Serves: 3
Ingredients
Instructions
Notes
* Although I used fairly small Asian eggplants here, I would recommend the smaller the better. Picking up each tiny half like finger food is more fun (and tender) than slicing up a larger piece. Plus, it's cute and easily turned into an appetizer. ** Stand at attention in front of the broiler. These can burn fast. *** This is a salty sauce so be aware it can end up being a salty dish. Offset it with some white rice. I felt it wasn't too salty for me but I also was cautiously generous when I brushed on the glaze.
Wordpress Recipe Plugin by EasyRecipe
2.1.7
If you love this, share it!