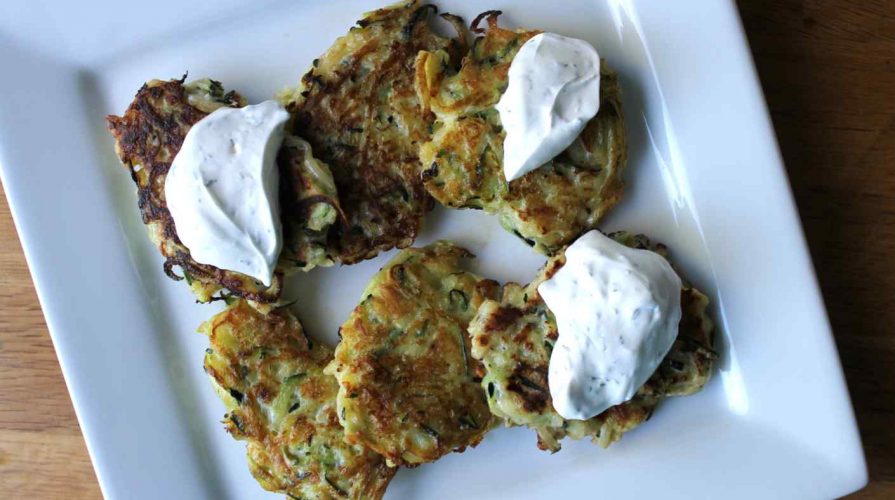 After my zucchini whoopie pie recipe, this is my second stop on the quest to use superfluous zucchini in less traditional ways than I have in the past. On my last post, I explained that I was faced with a monster-sized zucchini. What to do but go off the beaten path of zucchini bread. A windfall of marrow is my time to experiment. So, here is another zucchini recipe: latkes. I visited a sunny golden beet latkes recipe long ago.

I don’t have any allegiance to a specific latke recipe, be it potato, zucchini, sweet potato. My repertoire of Jewish food is fairly lacking, though fully appreciated in other kitchens (but I do admit my ceciarchiata taiglach is pretty spot-on and underrated by most). But I do know I like latkes crispy. The trouble with some of the vegetables used is the moisture slogging up the latkes. The key is the salty relax time the shredded zucchini takes and the magnanimous squeeze before mixing with the other ingredients. While I do these steps without fail the few times that I have made these latkes, I still end up with a sometimes less-than-crispy edge. Blame it on the distraction of motherhood: sometimes my latkes are ignored in the pan whilst I break up a teasing fight between Peach and Grub or tend to a fussy Sky-Girl. When frying, make sure to press the patties down, give them enough time in the pan to sizzle, then flip or remove when the sizzle stops. Oil soaks into the non-sizzling latkes sitting in the pan, thereby softening them. Enjoy the crispy edges immediately, serving with a flavored sour cream (smoked paprika, garlic and lemon, fresh thyme, whatever you like).

Save Print
zucchini latkes recipe
Author: story of a kitchen (adapted from many sources)
Recipe type: vegetable
Prep time:  20 mins
Cook time:  20 mins
Total time:  40 mins
Serves: 4
Ingredients
Instructions
Notes
While I liked these, and the kids did too, they were missing something without the sour cream. Flavored sour cream: a must. The crisp latke edges are also key for my enjoyment. Use good oil or chicken fat.
Wordpress Recipe Plugin by EasyRecipe
2.2.6
If you love this, share it!