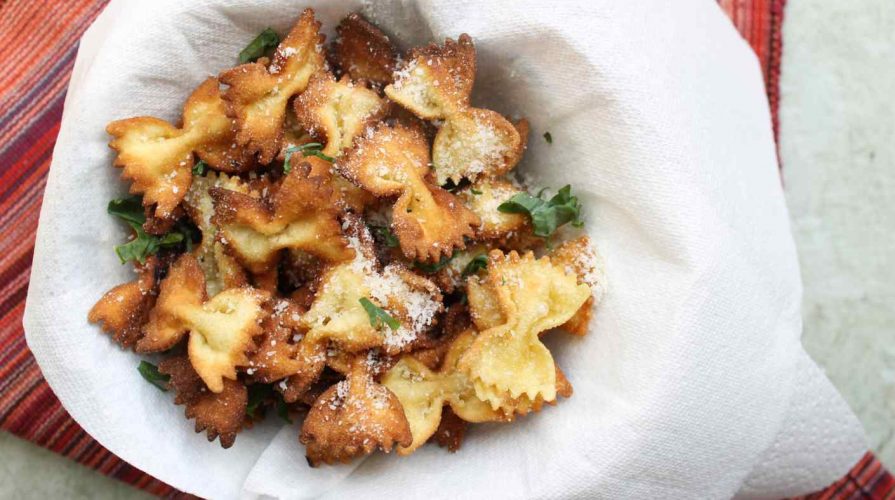 Pasta chips: Not much substance, but crispy and fun to eat. A superficially satisfying snack. Doesn’t really fill you up. Not very nutritious. Apropros.

I had something lined up to post last week for Election Week for the United States, ducks barely in a row to do so with the usual ebb and flow of busy-ness. I thought of a fun post-Election cake. Or maybe some multicolored crispy rice treats in the shape of a election party logo or American flag. Perhaps some fruit soaked in champagne as a celebratory dessert.

None of this happened.

It isn’t the normal bustle of life to blame for my uninspired moments this past week. It was the election itself. That Drumpf won, actually WON, gutted me. I am angry, so angry. What does this say about many American people?

It says that we are unhappy with the rote and expectation of typical politics.

It says that we are okay with electing a president with zero governance experience.

It says that we are okay with electing a president with no military background, whether or not your support the military.

It says that we support shutting down American borders to those most in need, like refugees.

It says that we are racists and normalize behavior and language supporting racism.

It says that we support violence.

It says that we endorse groping women’s bodies against their consent.

It says that we are not ready for a woman president and blame her husband’s inequities on her.

It says that making fun of disabled people is acceptable.

It says that any marginalized people, such as LGBTQI, don’t count like other “normal” people.

I’m not angry that a Republican won. I’m incensed that a man who is on record as being a racist and sexual abuser won. Those who voted for Drumpf are staking their humanity on the safe cushion of white supremacy. Look up white fragility. Learn what it means. And the people of color or other marginalized groups who voted for him? I DON’T GET YOU.

Not all of his supporters are misogynist racist xenophobes. The problem is that the supporters who are not still saw a misogynist racist xenophobe and said “he’s fine to lead our country.” See the problem? You are tacitly agreeing with this man. Impact is greater than intent. You are enabling this behavior. YOU. ENABLE. IT. Don’t whine when people are assuming you are one of these things. You’re supporting it. Is this a failure of empathy or are you just clueless that this language and behavior is hurtful? I don’t know.

You want to “Make America Great Again”, Drumpf supporters? Then understand that our society is not designed for your convenience and comfort. It is not just you or your family illustrated in the images and told in the stories in the news. When you feel oppressed by these things, then you finally have a taste of what many non-white people in this country already feel like. Hey, you feel marginalized! Welcome!

Be vocal about the injustices. Give support. Understand the history of civil rights. See how it it can affect people now.

Try to be compassionate. Call people out when they are assholes. Sometimes being kind isn’t always being nice.

Move forward. It’s the only thing we can do.

One year ago: a construction-themed birthday menu