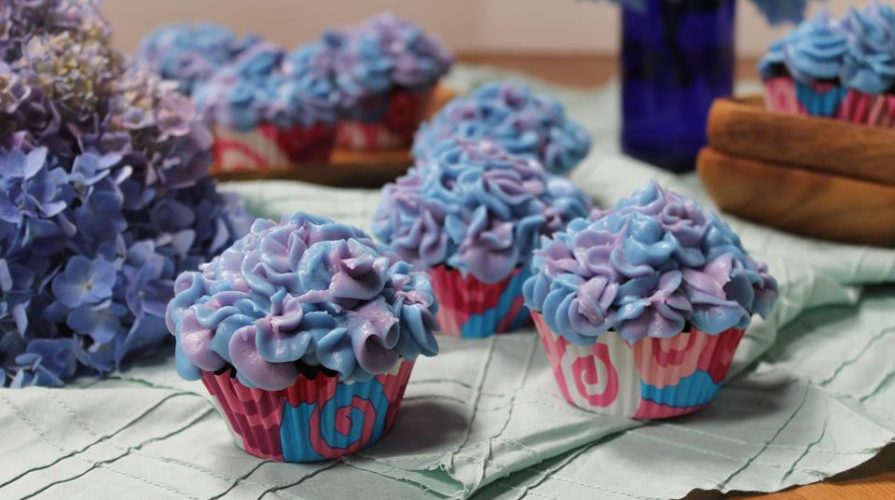 The hydrangeas in our neighborhood are brilliant cornflower blues, lilac purples, bright baby pinks, ice blue, and white. These colors aren’t in separate yards, but flower poms growing on the same bushes, pinks and blues cuddled up next to each other, some mixed in the same flowers together, each petal like a sunset-streaked sky, setting in a tiny world.

I queried my neighbor about the stark differences in our plants, mine blue and his a mix of pinks, blues, and purples. Though we both knew it had to be something with the soil contents, the strongest support was the expected differences in pH between our lawns. Namely, their family cat and two young boys pissing in the bushes for years bolstered that difference. When he planted the hydrangeas, he never knew what colors would bloom from year to year. It was usually a surprise and always a marvel. They start each season so unassuming, the buds like tight fists of bleached green. The potential is there every year, yet I forget how brilliant blue the flowers burst, even their blue stems impressive. (And he was kind enough to let me clip some; a mix of our flowers is below in the photos.) My cursory foray into curious and nosy flowertending this year unexpectedly brought me back to a distant conversation.

It was what came out of my mouth about two years ago. It started with a conversation with old friends, a nostalgia remembering good old college days and interest in where we’ve been and what we’ve become. On video. Of course.

The premise was actually my two friends interviewing me, to get up to speed in my life. Seeing as we had graduated from college about twenty years prior, there was the obligatory discussion about getting married, having kids, working, and moving. That and haircuts. Trying in my awkwardness of introversion to turn the tables a bit to take the spotlight off of me, I commented about one friend’s bright blonde daughters, not unlike what I would’ve looked like at their age. I then turned the conversation into a “if, then” verbal vomit, saying something akin to “I always thought I would have blond-haired children, then I married a Taiwanese man.”

Then I said, “I still love them though.”

I STILL love them? Why would I say this?? It sounds like white supremacy hate speech. I’ve NEVER thought of my children as a consolation prize, though my nervousness of looking like a fool on camera whilst talking with friends who knew me when I was barely an adult may have unmasked some deep seated regret I never realized. Or perhaps it was a trigger of memories of popular, privileged white kids I wanted to be in high school just because they were widely liked and lauded, nerdy me never quite fitting in. A few of the girls repeatedly made blatant racist comments about the kind Chinese male classmate who wanted to take one of them to the Homecoming Dance. He was emasculated and dehumanized before anyone ever knew him. At one area high school, I was told that the whites and blacks didn’t hang out together, because it could be “dangerous” and those who did “could beat you up.” A friend who was asked to prom by a Chinese student feared that her World War II veteran grandfather would disown her for going to the dance with someone who looked Japanese. Despite these biases trying to take root in me and apparently doing so partially, I NEVER planned to have blond children. I just knew. An earlier flashback: In grade school, I remember friends talking about the two main actors in the TV show the Dukes of Hazzard, John Schneider and Tom Wopat. It was a really John Schneider they talked about, commenting that his [said in a dreamy voice] “baby blue eyes and blond hair” are what made him the more attractive of the two. This just wasn’t one or two friends, it was a group of them with this mentality. I could not figure out this phenomenon. I had blonde hair and blue eyes. I did not want to be partnered with someone who looked like me. I liked me, but I didn’t want to be with another me. I wanted something different than me on the outside but maybe more similar on the inside. This was when I consciously I knew I would not end up with a person who looks like me. And frankly, years later in remembering this point, I knew I had to get the hell out of the homogeny bred in the land of corn, soybean, pigs (and the ignorance of race — thankfully, my parents never propagated this!). So why did I publicly lament my lack of blond children when, in fact, I was never destined to have them? I can’t imagine birthing any other children than the ones I have, each perfect. And not blond. And biracial. For me, that blabber was an episode of filling up space, a poverty of content spewing from my mouth, yet speaking volumes of unconscious biases and awkwardness. Since that conversation and my analysis of my words, I became much more deliberate with word choice and the examination of my biases. Our world is gauged on a meter stick of whiteness as superior. The depth of my core knows this is demoralizing and dehumanizing, but the biases that our society continues to propagate bleeds into our conversation, trickle by trickle.

Goal: The tourniquet is applied. The blood is clotted. And that artery will necrose and die. Don’t celebrate the porcelain skin as the only beauty. See the beauty in the chocolate brown skin. Or my husband’s golden brown skin. Or in someone’s eyes shaped differently than mine, like my husband’s. Or in a wide nose. Or someone born without a hand. Or voluptuousness compared to a narrow waist and hips. Or the amount of body hair or lack of. Or how black, kinky hair is just as beautiful, if not more, than blond, straight hair. Or if a man is in love with a man. Or that we have different life experiences that we can appreciate and learn from if we listen to each other. These pieces of us that make a whole; they are all what make us human. Bottom line: I love my children exactly the way they are: perfectly formed and made in an interracial family. We all say stupid things sometimes, revealing things that we may not have known about each other which force us (me!) to re-examine bits of me that I may not like, and reshift my attempt to decenter my biases and help dismantle the larger whole of racism, pebble by pebble. And this is what also makes us human, to examine and learn. Just like the hydrangea bushes, you never know what beauty your genes can create, on the outside and inside. A nurturing environment to show value in our differences and deep sameness is that proverbial nudge in the soil pH. You may be lucky enough to have a family like mine with hydrangeas growing in different colored poms, all on the same plant. Lots of recipe choices from the archives!

Hydrangea inspiration and instruction from: http://www.glorioustreats.com/2010/07/hydrangea-cupcakes.html

5.0 from 1 reviews
Save Print
hydrangea cupcakes
Author: story of a kitchen (flower design, inspiration, and frosting recipe from http://www.glorioustreats.com/2010/02/recipe-cream-cheese-frosting.html and http://www.glorioustreats.com/2010/07/hydrangea-cupcakes.html
Recipe type: Dessert
Prep time:  24 hours
Total time:  24 hours
Serves: 12
This frosting is enough for approximately 12 cupcakes. If you are an overfroster, double this recipe. Doubling the frosting is fine as it keeps well in the freezer, well wrapped, for a few weeks.
Ingredients
Instructions
Wordpress Recipe Plugin by EasyRecipe
3.3.3070
If you love this, share it!