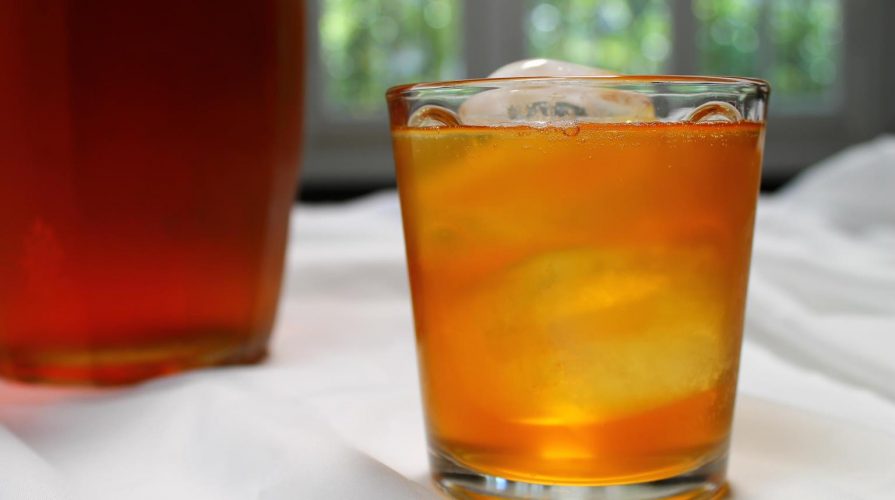 Her name is Tracy Bonham. She creates the sweet, the tang, and the effervescence of …  kombucha! Tracy is what I named my SCOBY, or Symbiotic Culture of Bacteria and Yeast, aka the “mother”, a strange and beautiful combination of organisms that makes kombucha, a sweet-sour fizzy fermented tea.

The music artist Tracy Bonham is best known for her song “Mother, Mother”, a huge hit in 1996 when I was first living in Atlanta. It is full of niceties and angst, a Jekyll and Hyde conveyance of trying to make it as an adult in the real world. There’s “I’m bleeding to death” to “everything’s fine!” in one fell swoop. One can also consider this mother-daughter conversation one-sided, as if Tracy herself is talking to a dead phone line, trying to convince herself that everything’s not fine, the angst coming to a rise after a slow, kombucha-like fermentation of reality hits. Since I named my SCOBY, I can’t read the word “kombucha” without changing it to “kombucha!” It’s like watching a 1950s Batman episode when the onomatopoeic punches are flying and captioned across the screen. It’s the pure essence of Tracy’s song, with her screams of “everything’s fine!”

That’s why my SCOBY is named Tracy. Because I analyze song lyrics from under-appreciated music artists from the 1990s. Because I somehow have space in my brain to do this.

Kombucha is an age-old drink, originating in the Far East 2000 years ago. Both my Taiwanese mother-in-law and husband questioned this fact when I announced it, dubious that kombucha isn’t just some Whole Foods hippy drink. My husband went so far as immediately whipping out his phone to wiki-check my claim of its Asian roots. Whether there are health benefits like “detox” (seriously, what the hell does that mean? Your liver does this already. Because SCIENCE.) or improved digestion, who cares what it tastes like? Wrong. My kids don’t care about “immune support.” Or improved digestion. My husband doesn’t either. We all know it tastes good. And if it’s healthier than soda, then that’s good enough for me. And Tracy doesn’t care one bit. the diaphanous veil of SCOBY forming

Tracy (and I) have some basic notes before starting:

1. Brew kombucha in a glass or food-safe ceramic container. There is potential of plastic to leach into the kombucha. Glass is inert.

2. Why the fuss on caffeinated, uncaffeinated, decaffeinated teas? Some people are concerned about caffeine content and therefore prefer caffeine free drinks if possible — but kombucha’s caffeine isn’t that bad. Plus, kombucha brewed without tea (Camellia sinensis) is not predictable. Your brew may not always ferment properly and the sustainability of a SCOBY using herbal teas or the like is difficult. In my reading on this topic, I found the company Kombucha Brooklyn a wealth of information (no, they are not paying me to say that). They had great success using a combination of barley and rooibos teas without disrupting SCOBY integrity.

Another option is to try decaffeinated black tea. The problem: store-bought decaffeinated teas are usually treated with chemicals. This isn’t great for kombucha making. Instead, one can blend teas, such as green tea and white tea, to decrease caffeine. You can also try to decaffeinate tea yourself as I explain in the recipe body: steep the black tea for 60 seconds and dump the liquid. Use new boiling water to use the tea again to make the final tea to use in the kombucha. About 50% of the caffeine will be present in the first steeping. I don’t find the caffeine content all that problematic in kombucha, and I’m pretty sensitive to caffeine in general, jittery, sweaty, and headachy after a couple of days of coffee.

3. The longer you brew your kombucha, the more vinegary and less sweet it will taste. Fermentation is about 7 to 10 days, up to 30 days. The thicker your SCOBY, the faster it will brew. The warmer the ambient temperature, the faster it will brew. If you ferment for 30 days, there’ll be very little sugar remaining in the final brew. This ultra-vinegary brew is great for making salad dressing. Remember, the initial sugar addition is not for you: it’s for the bacteria and yeast. Don’t get all huffy about the sugar content. Seriously.

4. Avoid the fart brew. Yes, that’s what I said. Fart. Some people swear by using well water for the best tasting kombucha, while others prefer distilled or filtered water. I have found using city treated water, in Atlanta, not preferable for my tastes. This is where I discovered my brew could turn into a farty smelling juice. I usually try to use distilled water, though filtered water is fine as long as the filter is still fairly new and works appropriately. See my detailed post for more details on why your brew may smell like rotten eggs. In any kind of fermentation, there is potential for things to go wrong. Remember, this is a combination of good bacteria and yeast living in symbiosis. Things can get out of whack.

— SCOBYs are fascinatingly disgusting, alien-looking, and beautiful. It’s what I think of as a vegan placenta. If you’re weird like me, you’ll want poke and touch it. As much as you may want to play around with it, don’t handle the SCOBY much. Wash your hands well without soap residue and rinse with distilled vinegar, if necessary to handle. You don’t want to inoculate it with something nasty on your hands. I also use a scrupulously clean set of wooden chopsticks to move the SCOBY around in a kombucha brew jar if needed. Early literature states metal and plastic are not appropriate and handling SCOBYs due to chemical reactions and chemical leaching. If the metal is stainless steel and brief in contact, such as moving a SCOBY from a brewing container to a plate to clean the container, there is no problem. SCOBY color can vary but healthy one generally is a cream/tan color. Dark tea can stain it over time.

— If you need to clean your SCOBY, pasteurized white distilled vinegar is best. Put it in a bowl, cover it to avoid airborne muck from getting in, and soak it for an hour or more. Make sure the bowl is covered. If you use raw vinegar, you might convert your SCOBY into a mother of vinegar — don’t do this unless it is your intention! The only time I needed to clean my SCOBY was when I had an issue with using not completely filtered water. The partially filtered water had some sulfur leftover in it which caused a sulfur smell to form as the kombucha fermented. Other sources explain the smell is actually from bacteria itself.

I actually threw out a whole batch of kombucha mid-brew cycle because the smell, afraid that a minute longer of brewing was hurting my SCOBY (anthropomorphizing…).

— Mold can develop on your SCOBY. This rarely happens honestly, so long as you are feeding and tending to the SCOBY properly. The blue-green mold spots are much like the colonies one would see on moldy bread. It’s really fuzzy. The brown-white spots and stringy bits you see are NOT. These parts are just the SCOBY growing normally. Mold can also be provoked if you revive a stored SCOBY from the fridge. DON’T STORE SCOBYs IN THE FRIDGE! (More on that later….)

— And then there are the unwanted guests, supping from your brew jar. Whenever you are moving or exposing the SCOBY, cover it. This prevents fruit flies or other unwanted visitors from taking up residence. Rarely, vinegar eels can also appear in homebrewed kombucha. Usually this is an issue in large-production kombucha and in apple cider vinegar making. These little guys are obvious if you shine a light unto the side of the brew jar, wriggling away. (Seeing them wiggle in opaque ceramic jars, one must be in a dark room with a flashlight shining on top of the brew, SCOBY pushed aside.)

— What to do with the new SCOBY babies? There are tons of options:

A. Keep them brewing and retire the ragged, older SCOBY layers. Each SCOBY cycles about 5 times before it’s too tired. The darker, most posterior layers are older; the new babies are whiter in color and on top. (However, if brewing with dark black tea, the SCOBY may turn brown before it is too old.) When your SCOBY colony is about 1 inch thick, separate it into about 1/2 inch thickness. Retire the older layer(s) or see below. The older layers are dark brown and easily separated from the newer layers.

B. Eat them: stir fry or dehydrate. I’ve actually eaten the layers raw, peeling the older, more sour tasting layers from the new. Not a bad snack for people who don’t mind the texture and flavor. I did note an alcohol undertone.

C. Compost them (But why would you do that?? Save them! Give them away! Eat them!)

D. Store them for later in a “hotel.” This is kombucha in a jar housing a few SCOBYs at room temperature. Cover as you would an actively brewing kombucha jar, but feed them less frequently. Check on evaporation also, making sure to top off the hotel liquid to fully immerse the SCOBYs. I made the mistake of storing a couple full hotels in the fridge for a few weeks, then was horrified to read that this can mess up the colony balance. Essentially, the colony lies dormant when cold, and may take a few tea cycles to revive it. I resurrected some of Tracy’s babies, thankfully. After a few cycles, the kombucha was back to the fizzy, tangy drink I loved. I had to get through a few rounds of flat tasting kombucha beforehand.

E. Give them to friends.

–What about other approaches to feeding the culture?

Jun, a Korean honey-based version of kombucha, is another option. The SCOBY is not as sustainable depending on the tea you use so you may want to experiment on a plethora of babies saved up in a kombucha hotel. I tried a 1:1 ratio of barley tea to black tea using 25% less honey than the sugar amount. In other words, for a gallon, I used 3 barley tea bags (not the large ones) and 3 black tea bags and 3/4 cup honey (processed or raw is equally fine to use). The SCOBY held up fine. I switched to all green tea with the same SCOBY — still fine. I started with a SCOBY started in a kombucha (sugar-tea) culture and converted it to a jun culture. I don’t recommend switching a SCOBY back and forth from sugar to honey: pick one and go forth. Mine has lasted multiple cycles. Even though I’ve brewed with multiple cycles of green tea, I still taste the barley undertone.

Feel ready now? Tracy is! Need a SCOBY? If you live in the Atlanta area, contact me and you can adopt one of my “hotel” babies.

Save Print
kombucha!
Author: story of a kitchen
Recipe type: Drinks
Give yourself at least a week to ferment the brew. Read my post above for more details on ingredient and equipment choices -- very important!
Ingredients
Instructions
Notes
* I love rooibos tea, a red, uncaffeinated, low tannin tea historically popular and originating in South Africa. It got me through medical school. See notes in the post on using caffeinated versus decaffeinated versus uncaffeinated teas.

** If you don't have starter, white distilled vinegar can be substituted per some sources I've read. It's not optimal but may work. I've never tried it.
Wordpress Recipe Plugin by EasyRecipe
3.5.3251