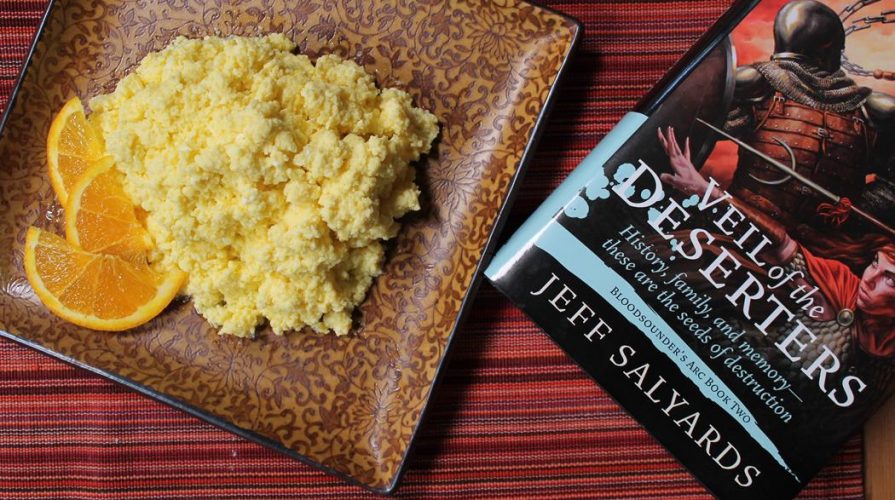 Almost four years ago, I did a book review for my friend Jeff Salyards, couched in the sweetness of an impressive fresh peach cake. He had just published the first book in his Bloodsounder’s trilogy, Scourge of the Betrayer. Then we were hit with the well-awaited release of Book 2, Veil of the Deserters. The last book in the series, Chains of the Heretic, delivered even more blows, for a finale that was satisfying but left some of the intense readers wanting another book.

Throughout the series, Salyards often talks about the paltry yet always appreciated sustenance of the Syldoon warriors. There is the ever-present talk and consumption of stale wine (essentially vinegar, but it is still wine). My mind often drifted to the sinewy dried meat, the musty bread, and the lauded boiled egg.

Truth be told, much of this post is regurgitated from the book reviews I did on Goodreads and Amazon, with the added personal bias of food here. Sustenance is never ignored in world-building, though it may not be the focus. I ate every dribble of foodmention in the series, hoping that there might be something more nourishing than just a crumb. The egg is where I take my spin. Veil of the Deserters starts with Scourge‘s cliffhanger: Arki’s unwelcomed discovering of a certain Hornman. Continuing with the unique perspective of narrator being the group’s archivist, having us hang back in Arki’s simultaneous discovery of secret histories of the Syldoon, we see him transforming in this book. He toughens up and he speaks up more. Without Arki to explain it to us (and everyone else sometimes), there would be no exponential building of new parts of Salyards’ fantastical world, no naive questioning that leads to more satisfying character development and backstories, and no expanded records of other-worldly battles or the nicked-up armor donned. There are attempted mutinies and a primal drive through the Jackal Tower Syldoon and Arki to save their rough and beautiful world. (I’m intentionally being vague here so as to not reveal spoilers.)

Salyards authenticates his magical world more so in this book, even giving readers a map at the start. Being a visual person, I loved flipping back and forth to follow the path of the Syldoon crew. There is even more character development with the introduction of Captain Killcoin’s sister, Soffjian, into the storyline. Oh, how I love this sibling antagonism. And she is a Memoridon, a creeper through minds, to boot. Veil is on a larger scope than Scourge ever was. Wit and banter continues with guy-talk between the men with the added Braylar-Soffjian dysfunctional family interplay. It is the bloom of the Memoridons’ history and their intrinsic connection to the Syldoon that drives this book, a darker and darker underbelly as we read on. And what a set up for Book 3. Salyards weaves together a brilliant continuing story with enough loose ends to force us to try to tether them. Veil is just that: just enough tang and hum of Veil to tempt us, wanting to peek into the next installment. There is no break in plot between the second book Veil and the third book and final book in the series, Chains of the Heretic. Those loose ends that tempted us to this next book are tied up, not in pretty, idealistic bows, but tough knots to finish the series. We are immediately plunged back into this world of the Captain Killcoin’s military troupe, the connect-disconnect of the Memoridons, the feared (God)Veil, an impending Deserter attack, and the felled coup by the Jackal Tower Syldoon to overthrow Emperor Cynead and reinstall Thumaar — with a lot of twists and turns in the mix. The theme of this book is betrayals! And more betrayals!

Even more so than the last two books, Chains delivers (is that possible?!). The origins of Bloodsounder unfold completely as Arki delves into the scroll translation, per Braylar’s orders. We understand further the dysfunctional family dynamic between Braylar and Soffjian. We hear the scruffy banter between the men (sometimes with women), Muldoos leading the pack with the use of the word “plaguing” frequently. We are privy to the tricky, though sadly realistic, politics of this imaginary world, and how the Memoridons are inextricably linked. And Arki, such a boy in the first book, matures into a great teller, a voice that the Jackal Tower Syldoon rely on for their next moves. He is central to documenting the translation important for Captain Killcoin’s goals and well-being. Though Arki may have toughened up in Veil / Book 2, it does not compare to the lessons he’s learned in Chains. He moves from the skittish archivist, cautious to pipe up, fearing the wrath of Killcoin, to an integral member of the team. In his own way, Arki infiltrates this tight brotherhood of Syldoon through is own pseudo-manumission, showing how intellectual prowess complements the sweat and brawn of a warrior. We experience his wrestling with killing and his desensitization to it. In the end, through the many dead and the hard decisions many of the men and women make, the duplicity, the rawness of deceit strung taut through the storyline, Arki is the winner, being accepted into this riff-raff family of sorts. Muldoos takes him on a fight apprentice, teaching and deprecating his every move. Vendurro softens his interactions with Arki as they become friends. Braylar is as impatient as always, but taking Arki more seriously. I’m focusing this review on Arki because I feel that I must talk about his transformation through the three books to be fair to the writer. As Salyards matured the storyline and his writing with subsequent books, Arki similarly did so in his maturation as a character. I was not grimdark reader before Salyards’ series and have become a believer — as a reader and a woman. As Salyards’ writing pulls you in, you can’t help but welcome the tether and mire of grimdark fantasy.

My post today serves as a book review and a celebration of this ruffian group, with a recipe from a medieval cookbook. Enter The Medieval Kitchen*, a book that my sister gave me for my birthday a few years ago. I posted the recipe for the shallot-ricotta tart, a lovely allium-heavy tart that serves ruffian, harlot, plebeian, and the unreachable echelons of society equally. The cook book is a beautifully written tome of history, the authors reconstructing and translating French and Italian (and a few British) recipes from 14th and 15th century documents to accommodate modern kitchens. There was one recipe that really caught my eye and I knew I had to make it: Orange Omelette for Harlots and Ruffians. That’s the actual name of the recipe. I imagine this group of soldiers would easily be open to a meal of Orange Omelette for Harlots and Ruffians. Framed with the Syldoon and their ilk, I can think of nothing better to serve them at one of their other-worldly tables. The translated recipe in The Medieval Kitchen reads:

Take eggs and break them, with oranges, as many as you like; squeeze their juice and add to it the eggs with sugar; then take olive oil or fat, and heat it in the pan and add the eggs. This was for ruffians and brazen harlots.

So, I tried the recipe. I didn’t like the taste. But it wasn’t terrible. It is basically a sweet scrambled egg (not technically even an omelette, though the original recipe names it such). If I was a traveling soldier, with the weight of my people’s lives hanging in the balance, bloodied, sweaty, dirt-caked, and weary, this would be heaven to eat.

To Arkamondos and the Syldoon, I serve you this custardy dessert. I trust you will enjoy it just as much I enjoyed your stories.

(And if you read the series from Salyards and liked it, he’ll have a totally new non-medieval, futuristic book coming out….Yay!)

Here are links to the Bloodsounder’s Trilogy through Amazon. Buy the books!

Scourge of the Betrayer

Veil of the Deserters

Chains of the Heretic

Save Print
orange omelette for harlots and ruffians recipe -- and a trilogy review!
Author: story of a kitchen (originally from The Medieval Kitchen book by Redon, Sabban, and Serventi)
Recipe type: Dessert
Prep time:  10 mins
Cook time:  3 mins
Total time:  13 mins
Serves 2, or one Muldoos.
Ingredients
Instructions
Notes
* The bitter orange used in the original recipe is hard to find now. The authors recommend a mix of orange and lemon juice. I ended up with 7 ounces (210 ml) of juice.
Wordpress Recipe Plugin by EasyRecipe
3.3.3070
If you love this, share it!