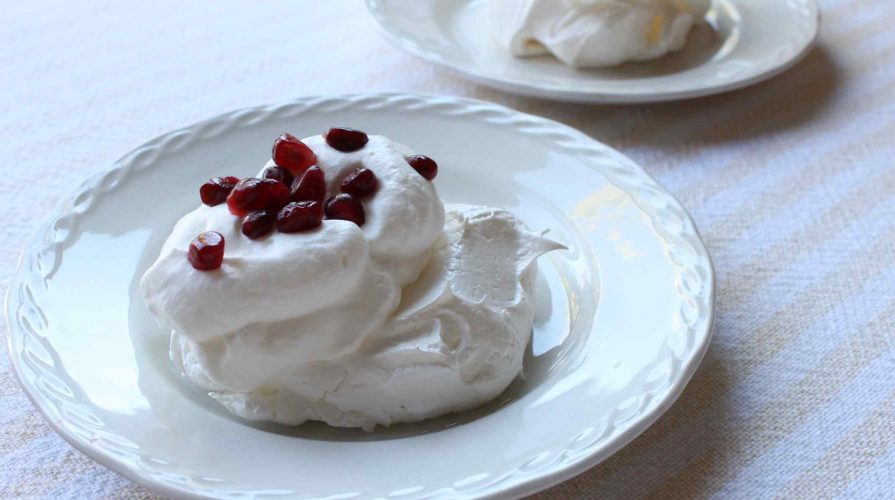 I’m going a bit nutso right now, curbing my obsessive cooking hobby as I am 1) way too backlogged on numerous posts (macarons a’coming soon) and 2) working 5 days a week again, leaving me with little time to pick over the cranberry beans at the local market at 10AM on a weekday, or delight in the wonder of ceciarchiata taiglach, or to layer leaves of phyllo with butter, sugar, spices, and rosewater. Making a much grander entrance than the grandmotherly baklava, my impetuous pavlova flits in like an aloof ballerina.

This is what I imagine sugar plum fairies would eat, when they are done flitting about a nutcracker and in the dreams of Clara. And how appropriate that would be, as the inspiration for the dessert is the dainty Russian ballerina Anna Pavlova of the late 19th and early 20th century. Although the source of debate for many years on whether the creation is attributed to Australia or New Zealand, the pavlova dessert is thought to have been created in the dancer’s honor during or after one of her tours to those countries in the 1920s.

I first experienced pavlova in Australia, though I barely remember it. I discovered a taste for beer when I was there, too (still eschewing big company American beer to this day) and ate many buttery sables. In my beer haze and butter bloat, I can see how I forgot my delicate pavlova: inexcusable at best! I wanted to re-create it for Christmas this year with tangy passion fruit, its gold flesh like the golden star on our Christmas tree, but couldn’t find any passion fruit to use. The pomegranate was an easy substitution, the glittery gems of arils like rubies. Eat deemed this “the best dessert ever” while the kids had fun with the meringue bottoms and whipped cream. Peach demanded more, and luckily I had more in waiting. If serving this for a fancy Christmas dinner, you can prep the meringue and harvest the pomegranate arils about one to two days in advance. The only thing to do before serving is whip the cream and assemble. You will look even more spectacular than Anna Pavlova.

Save Print
mini pomegranate pavlovas
Author: story of a kitchen (adapted from shuna fish lydon's recipe for pavlova - featured on the simply recipes foodblog - pomegranate pavlova - http://www.simplyrecipes.com/recipes/pavlova/)
Prep time:  15 mins
Cook time:  50 mins
Total time:  1 hour 5 mins
Serves: 7
Ingredients
Instructions
Notes
NOTE: Makes 6-8 small pavlovas. I basically halved the original recipe and made the pavlovas even smaller, ending up with 7. Also, the meringues can be made a day or two in advance and stored in an airtight container at room temperature.
Wordpress Recipe Plugin by EasyRecipe
2.2.6
If you love this, share it!