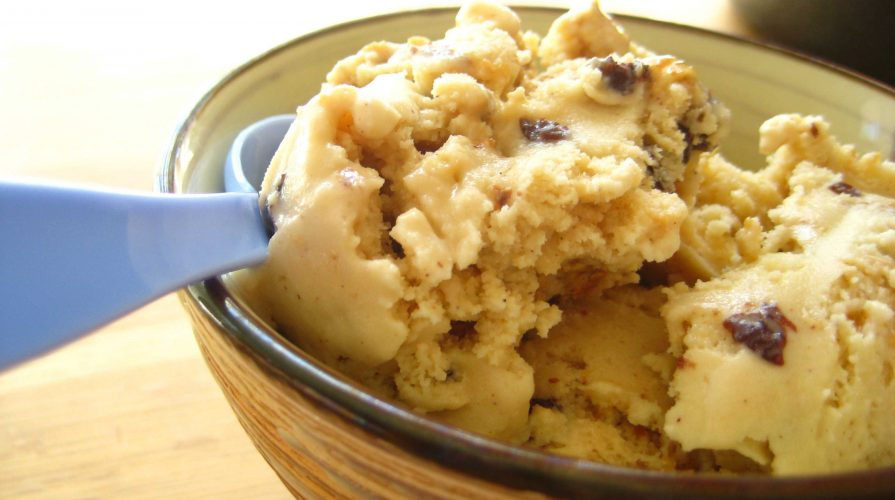 oatmeal raisin ice cream: you’d better sit down for this one :::: I’m back at the ice cream, after having the summer come and swoop me up into the heat more than I expected this year. Last year, I was pregnant, incessantly complaining about the heat and my own radiation of it. I assumed that not having air conditioning combined with the hot weather and my surging hormones wasn’t a bother really,  I mean, I wouldn’t be pregnant next summer and all would be good. I’d sit in the Nor Cal sunshine and feel the bay breeze on my face, clearly evaporating any tiny beadlets of sweat that might be forming there.

Despite my hopefulness, we’ve hit a few 90 degree days already. “It’s global warming,” my neighbor explained as she drove off to her job in an air-conditioned building. “Oh, this has been terrible?” remarked a peri-menopausal woman at the grocery store, fanning herself with a grocery circular. “I stay here as long as I can during the day!” These temperature peaks are without the thick lick of humidity of the Midwest that I’m used to, and it is still almost as unbearable. No, I’m not pregnant. No, I’m going through early menopause. I just hate being hot. So the ice cream wins again. I shuffle frozen pork stock, blueberries, and unbaked oatmeal cookies around to find space in my overstuffed freezer for ice cream. Wait, oatmeal cookies? Requiring use of an oven in an already stifling hot room? A recipe that would turn our kitchen into a sauna? Problem solved: make oatmeal raisin ice cream. I get the best of both worlds: a cooling rendition of my favorite cookie.

I find this ice cream a little sweeter than I normally like, but since it carries my favorite flavors of oatmeal, cinnamon, and raisins, I can’t complain all that much. Overall, the recipe is more involved than some ice cream recipes because it includes the raisin preparation (the rum is a nice addition and you can’t taste it in the final product), the oatmeal praline (make extra to eat!), and there’s the tedious but always worth it preparation and overnight chilling of the custard for the ice cream base. Although I might cut the sugar a little  in the future, I wouldn’t want to alter the recipe too much as sugar reduction can affect the freezing process and texture, and this really is a great recipe already. It’s a unique way to bring the warm and cozy into summer…and into ice cream. Thank you, David Liebovitz!

Save Print
oatmeal raisin ice cream
Author: story of a kitchen (minimally adapted from David Liebovitz's book The Perfect Scoop))
Recipe type: dessert
Ingredients
Instructions
Notes
Oatmeal Praline: ¾ cup old-fashioned oats ½ cup sugar Pinch of coarse salt 1. Preheat the oven to 350 degrees F. 2. Line a baking sheet with foil (or use a silicon mat, like I did), spread the oats evenly on the sheet, and bake for 10 minutes, stirring once or twice while baking, until the oats are fragrant and nicely toasted. Remove from the oven. 3. Spread the sugar in a medium, heavy-bottomed skillet and cook over medium heat, watching it carefully. 4. When it begins to liquefy and darken at the edges, use a heatproof spatula to stir it very gently, encouraging the heat of the liquefied sugar around the edges to moisten and melt the sugar crystals in the center. Tilt the pan and stir gently until all the sugar is melted and the caramel begins to smoke.* Once the mixture is deep golden, remove it from the heat and immediately add the oats to the skillet (lift the foil to guide them in quickly). Return the foil to the baking sheet. 5. Stir the oats gently but quickly, coating them with the caramel. Scrape the oats onto the foil-lined baking sheet and spread them as well as possible. Sprinkle with the salt and let cool completely. Once firm, break the praline oats into small pieces by pulsing them in a food processor or placing the pieces in a heavy-duty plastic bag and smacking them with a mallet or rolling pin. (The rolling pin worked fine for me.) * The indication of "the caramel begins to smoke" in the original recipe made me nervous so I watched carefully and used the "deep golden" cue for my next step. Because melting sugar can go from transparent to black in seconds, I waited until I achieved a light golden color and proceeded. I didn't want to have a black mess, one that not only tastes terrible but also is a pain to scrub off the pan.
Wordpress Recipe Plugin by EasyRecipe
2.1.7
If you love this, share it!