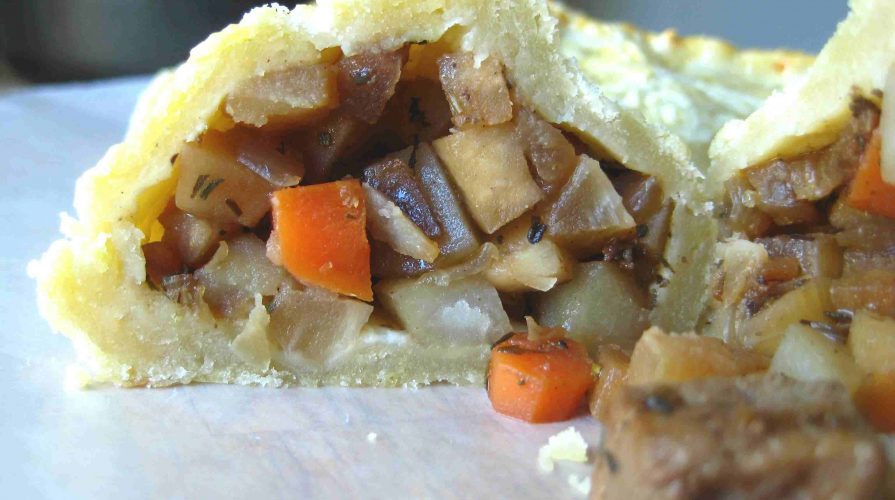 cornish pasties: not just for the tin miners :::: Here in the U.S., British food often gets a bad rap: the meat is overcooked, it’s too bland, steak and what  pie? Come on, let’s give it a chance. If you frequent the right places, and even the right home kitchens, you will find most of the complaints dribble. Enter the sausage roll (sausages wrapped in a flaky crust), Toad in the Hole (a savory egg-like pudding with sausages which I requested for childhood birthdays more than once), and the endless permutations of Fish ‘n Chips. Don’t even get me started on the trifles, cakes, and puddings. Spotted Dick, anyone? And finally in my own kitchen, I find the Cornish-ish  pasty. Just this year, the Cornish Pasty Association (really??) all raised a pasty to toast when the term “Cornish pasty” was awarded Protected Geographical Indication (PGI) status by the European Commission. To be called a true “Cornish pasty,” it must be prepared  in Cornwall but not necessarily baked  there. Hence the “Cornish-ish  pasty” designation in my kitchen.

I remember the true Cornish pasty as a child, never questioning its simplicity: meat, potatoes, turnip, onion, and sometimes carrot all wrapped up in a buttery crust. How could this be considered boring? I revisited the pasty’s birthplace on my honeymoon in Cornwall. My new husband and I walked the cobbled streets of Mousehole (pronounced maʊzəl) and steered clear of the Stargazy Pie for the best Cornish pasties I’ve tasted. The pasty became popular in the 17th and 18th centuries with the tin miners, although there are even earlier reports in Cornish history. The pasty represents a complete meal with a handle: filled with root vegetables and beef, the side crimp creates the “handle” so that dirty fingers (without access to a pre-meal handwashing deep in a tin mine) did not have to sully the food. I actually started out with the each pasty on its side, propped it crimped edge up, and baked it. I should have read my history beforehand: they are meant to be sidelying and baked, to make the crimped edge handle-like. (My Chinese dumpling making has influenced my memory apparently!) Overall, this was an apt recreation of my childhood memories of the pasty. I would have liked a more tender cut of meat. Although I used the suggested rump steak and seared and baked it as directed, I still felt it ended up rather chewy. Dare I suggest filet mignon? Perhaps a little fancy for a rustic pasty. There was also no indication from the original recipe how many pasties could be made from the crust and filling. I ended up getting 3 1/2 pasties out of the crust (and I used every last bit of it) and had enough filling to fill two more (with another batch of crust). I suggest you double the crust recipe to ensure you use up the filling. The crust is perfect for this filling, sturdy but wonderfully flaky. Time to rethink British cuisine: this is where meat and potato meals were born. What better way to eat that meal than in a pasty.

Save Print
cornish pasties recipe
Author: story of a kitchen (minimally adapted Simon Rimmer)
Recipe type: main
Ingredients
Instructions
Notes
* I felt I didn't add enough salt overall so I have suggested on each of the meat, onion, and root vegetable steps to season with salt. Make sure to taste to gauge how much saltiness you want. Remember the Worcestershire sauce will also add some saltiness.
Wordpress Recipe Plugin by EasyRecipe
2.2.6
If you love this, share it!