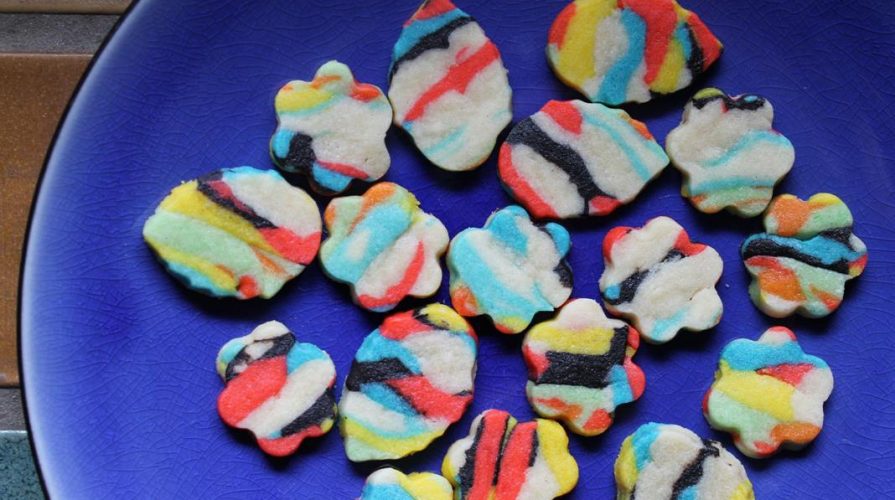 This is a part of the intermittent sugar cookie marathon I’ve been doing in the last few months. These are the leftover bits from each of those recipes, all mushed together in one end of a loaf pan, chilled, sliced, shaped, and baked.

The colors of these dregs, these leftovers, will change with whatever you make. It is this round for me that brings me back to the time I visited Taos and Santa Fe, New Mexico with my mother on a three-week long roadtrip in 2006. And probably will never visit again. scraps molded in a loaf pan, ready for slicing

Taos is a southwesternized Bar Harbor, Maine with more art galleries, no ocean, a dusty yellow desert, dirty sage green brush, and warmer weather. The famous Kit Carson home is here. Kit Carson was an American frontiersman, leading a successful life in trapping and the military. During the Civil War, Brigadier-General James H. Carleton, ordered Carson to lead an expedition against the Navajo, who continued to resist the white encroachment onto their land. Carson burned Navajo fields and homes, and stealing or killing their livestock. He was aided by other Indian tribes with long-standing hatred toward the Navajos, chiefly the Utes. White colonialism: greed, murder, and rape, all wrapped up in messy, bloody package. Much of the history we read on this trip was whitewashed, but the subtext was there. The land felt neglected, even in this façade of cheery tourism, the first Americans unable to tend to it anymore. The sky and sun, so bright, they hurt my eyes. The turquiose jewelry glinting in tourist shops is like that sky, brilliant blue, like the color of blue in these cookies.

Before heading to Santa Fe for the night, we stopped by the San Ildefonso pueblo after Taos. San Ildefonso is the home of the world-renowned black-on-black pottery with black matte relief developed by Maria and Julian Martinez. Since the early 1900s, this Tewa village has been the center of the Pueblo arts revival and is now one of the most visited northern pueblos. The ancestors of the San Ildefonso people abandoned their original villages at Mesa Verde and Bandelier due to drastic changes in the environment. It was on top of nearby Black Mesa that San Ildefonso and other pueblo inhabitants successfully fought off Spanish soldiers, who attempted a reconquest of New Mexico in 1694. Yet another attempt of destruction, which unfortunately wasn’t enough to keep the settlers out. The black pottery was as black as night, like the tar black cocoa sugar cookies in this recipe today. As the sky grew darker, we hurried into the city with a terrible city map to take advantage of the free admission on Fridays at the Georgia O’Keeffe Museum before they closed at 8 PM. After viewing the extensive O’Keeffe collection and appreciating the landscapes in her paintings more than I had before, we had dinner in the car and decided to stake out a place to sleep. We didn’t go to a motel because got in late and couldn’t find something that didn’t look too fancy. We figured since we were getting up early in the morning to get back on the road that sleeping a few hours in a quiet neighborhood would be the easiest thing. We outfitted the back of the van to accommodate sleeping in the back when were camping so this was basically the same, but free and across from homes. We’ve parked on a quiet street near downtown, across from the Frost Foundation, at the fork of Tony Street and Armijo.

Our decision to park where we did proved to be a big mistake.

I slept fitfully, not used to the van accommodations and hearing the occasional car whiz by. At 3:00 AM, Mum and I both, oddly, happened to be awake, likely because we had heard a rumble of a car drive by. It was boom of the rocks coming through the back window that shocked us and before we knew it, the back window had shattered entirely on top of us. We paused for a moment in our shock and I asked “What just happened?” I wiped my face and realized I was bleeding. Bright red. Mum was covered with glass, but luckily had no cuts. The car roared by from the other direction, turned the corner, and left. We immediately moved into flee mode, leaping into the front seats and getting out of the neighborhood. Having a useless city map and being very dark at such a late hour, we ended up driving around for 30 minutes just to find something, anything that was open like a gas station or grocery store. I cleaned up my bleeding forehead with some water and tissue before I stepped out the car at a yellow-lit Dunkin’ Donuts. The clerks directed us in broken English to a Travelodge. That’s where we unloaded the van entirely into a room. While unloading, I found two sizable rocks. We had thought maybe a speeding car had accidentally kicked up pebbles that shattered the glass. No, this was vandalism. This was intentional. For days afterwards, I would fall into lucid sleep, startled awake with a boom of rocks breaking glass. My eyes opened suddenly, my breath caught for a second, only to find I was in a motel room, away from any rocks or glass sailing through the air. I also found bits of glass in my hair for days, every time I brushed or washed my hair. There were constant reminders.

We filed a police report. We got the window fixed. We visited the scene of the crime — and saw another car with its windshield broken. And then got the hell out of Santa Fe.

Of the marvelous trip we had that month, traveling all over the West and Pacific Northwest together, Santa Fe was unfortunately the low point, the dregs of the trip, wishing I could forget it. Sometimes those leftover bits that weigh down the rest can be molded into something else. I am thankful that my mother and I were not seriously hurt, and that we can still cling to the rest of the great memories of the trip. So I today mold these colors of New Mexico, these colorful cookie dough dregs, the blacks, the blues, the reds, the yellows, into something better, something sweet.

One year ago: scallops with mexican corn salad (elote)