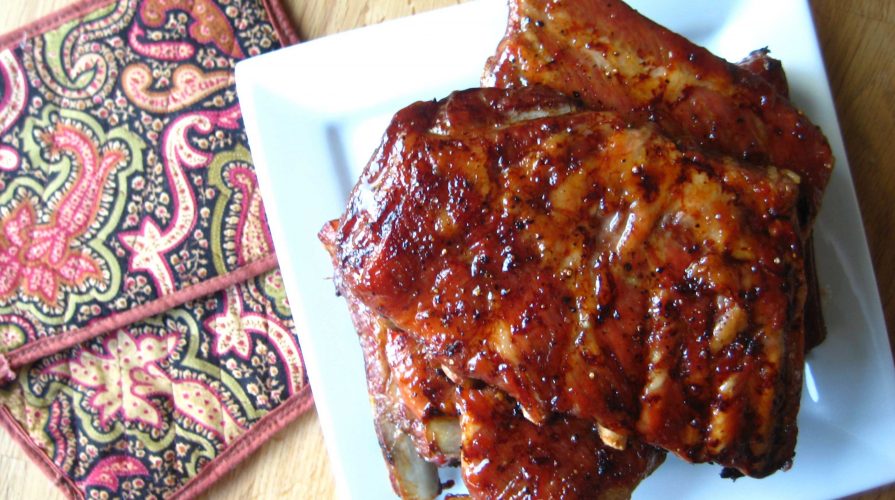 After months of blogging, I’m surprised I haven’t mentioned my time in Atlanta, Georgia more often. This isn’t a place where my food memories fill volumes, but I did start to be a little more adventurous. In between graduate school classes and attending as many open mics as I could, I mostly subsisted on homemade chicken Caesar salads, the Flying Biscuit‘s perfect biscuits, stir-fried zucchini just barely caramelized with a sear of olive oil in my scrappy non-stick pan, and the neighborhood’s pizza place, the Mellow Mushroom. Despite my school demands at the time, I was on a crusade to convince other pizza lovers that it should be law that one must eat a zucchini-ham-spinach pizza from the Mellow Mushroom at least once, because the combination was just that good. A friend, now husband, listened to my zucchini blabber, and started to agree with me. But something else diverted our attention. Ribs. Pork Ribs. Slow-cooked. Over the years, the meat has still won out, even on a pizza (I really prefer only vegetables — shhhh! Don’t tell!). We also both have had some of our best ribs in Atlanta, at Fat Matt’s Rib Shack, fingers dripping with BBQ sauce, clothing smelling of smoke and meat juice, and nodding to the music and emotion of live blues. I was amazed at the caliber of musicians on those open mic nights: seemingly random people, mostly women vocalists, from the audience would get up, request a key and song, and the band would follow seamlessly along, as if they’d been practicing for weeks. The music was transforming and transcendent: it didn’t matter that I had a stack of greasy bones on my plate, elbow to elbow with patrons at the next greasy table. It didn’t matter that I had dripped sticky barbecue sauce on my white t-shirt. The guy next to me had too. We were in the middle of this creative musical experience, stains and all. It wasn’t odd then, for me to want to taste some slow-cooked ribs again. Rummaging through my tightly-packed pantry, there was no question that I had to use the honey and tamarind (both making their appearances before in the Honey Goat Cheese Tart and the Tamarind Cooler posts) in some rib permutation. While these are nothing compared to the synesthesia of Fat Matt’s, they are nothing to scoff at. The honey and tamarind are a perfect balance of sweet and tangy. And the meat — fall-off-the-bone tender. There’s just no other way when it comes to ribs. Now if I could figure out how to make the perfect pizza crust piled with zucchini, ham, and spinach and make the perfect breakfast biscuit, I’d have the highlights of my Georgia food memories wrapped up. Save Print
honey-tamarind pork ribs
Author: story of a kitchen (hardly adapted from Food & Wine magazine, 2008)
Recipe type: meat
Ingredients
Instructions
Notes
* If you do not have tamarind, try pomegranate molasses instead. Anything that is sour and sticky works well. ** Alternatively, you could use a grill set at a low heat. I haven't tried it, but I suspect it would work well and you'd get a great smoky flavor on the meat.
Wordpress Recipe Plugin by EasyRecipe
2.2.6
If you love this, share it!