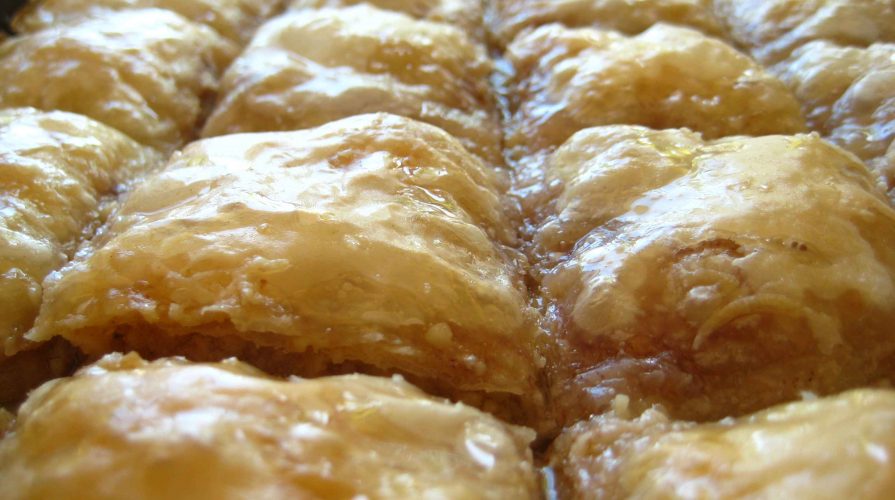 Shuffling through my mother’s recipe box on occasion as a child, I often remember stopping at the Baklava recipe. It seemed so exotic with its thin, flaky phyllo dough and the hint of rosewater. The amount of butter also floored me: how could one bake with a pound of melted butter? After some teenage badgering, I finally convinced my mom to help me make the baklava. The special purchase of phyllo was the most difficult part. I’m not sure how she hunted down the pastry dough, but she found it somewhere in our somewhat provincial town. My friend Janine, not an enthusiastic cook at the time, helped. I don’t remember how I coaxed her into baking with me, some Saturday morning. I was excited, Baklava! Finally! I remember she didn’t exactly understand what the fuss was about. All we were essentially doing was painting butter on a phyllo leaf, sprinkling ground walnuts and sugar on top, then repeating the process over and over again. Why was I all riled up about this? I remember holding each delicate, diaphenous phyllo leaf up, touching it like an ancient page in a weathered book, amazed at its translucency and thinness. She was kind of bored. Since my first baklava experience, I’ve had numerous other desserts and pastries to compare it to. There is the impetuous pavlova and the girl-next-door apple cobbler. There is the demure but regal Napoleon pastry and American favorite chocolate-chip cookie. The rotund, loveable baklava, like a stereotypical Turkic grandmother, settles herself comfortably in my kitchen, sweetening and warming the air with the scent of sugar, butter, and roses. It still remains one of my favorite comfort desserts. Some recipes put down half of the buttered phyllo, then all of the filling, then top with the remaining buttered phyllo leaves. When I have tried this, my baklava falls apart. I find with the meticulous buttering and filling sprinkles on each (or every other) phyllo leaf helps the pastry stay together better. I’m unsure if the method of sprinkling the walnut mixture throughout the phyllo leaves is authentic, but it’s seemed to work for me over the years as I have made this many times. I can imagine there is a yia yia somewhere, tut-tutting my technique. Oh, dolly-mou, she would say. Yia yia does it much better. Other recipes also use honey for the syrup, such as Greek versions rather than Syrian. There are numerous other countries and ethnic groups who embrace baklava as dessert: Azerbaijan, Iran, Turkey, Armenia, and Afghanistan are included. While the layers of nuts are dough are similar, there are many variations on how baklava is made. There are ‘dry’ versions (with less sugar syrup). A variety of nuts may be used such as the glowing green pistachio, the bitter walnut, or the sweet almond. Even the accessory flavors may vary from cinnamon to cloves to cardamom to a drop of rosewater.

This recipe I’ve posted is a Syrian version, walnuts and rosewater going hand-in-hand amongst the phyllo leaves, creating an impressive, but humble, dessert. I had many taste-testers this time around, to my benefit. The winning feedback was that despite the pool of sugar syrup in which my baklava seemed to swim, the pastry was not cloyingly sweet, as is often the complaint. For me, the rosewater and walnuts were the perfect odd couple: the delicate rosy flavor and scent goading the walnuts into enjoying an all-encompassing sugar bath.

4.0 from 1 reviews
Save Print
syrian baklava
Author: story of a kitchen
Recipe type: dessert
Ingredients
Instructions
Notes
* Mine came in 13 x 17-inch sized leaves. I cut this in half to fit into my 9x13-inch pan, then also trimmed one edge a little more to make sure the leaves fit flush with the pan walls. (You could also fold each in half.) What did I do with the trimmings? I made phyllo croutons (see photo below). Using a few leaves at a time, I painted them in melted butter, salted them, rolled them up and baked them alongside the baklava (about 30 minutes). I fully intended to save the lot for a salad -- but I ate one. Then another. And another. So crispy and buttery, I couldn't help myself. My salad was graced with some toasted almonds instead. ** Although many recipes recommend blanketing the top with 6-8 buttered layers of dough, I use only 2 and feel it's kind of thin (but never change my technique the next time around). Additionally, there are some recipes that place most of the filling in the middle of the phyllo leaves, whereas mine disperses it evenly throughout (see notes in post above). *** I considered cooking to the "soft ball" stage but then I recalled a bad baklava experience. I bought some baklava at a Greek market, marveling at the flaky, crispy phyllo. When I bit into it, it was so chewy from the hardened sugar syrup that I had a tough time chewing it. **** The pastry seems to swim in this at first, but as it cools, it absorbs most of this syrup. I always find my baklava a little moist on the bottom (gravity!) and consider reducing the simple syrup to 1½ cups water and 1½ cups sugar. But then I never do it. Persian versions of baklava are more "dry" so I could spin the recipe in that direction if I ever reduce the syrup.
Wordpress Recipe Plugin by EasyRecipe
2.1.7