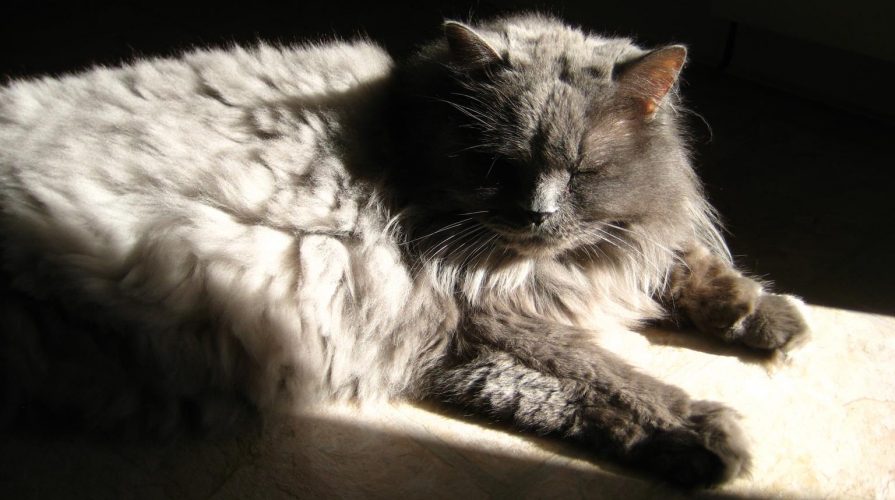 Our cat, Aslan, or “Bebo” as the kids fondly called him, died in mid October. He was 14 years old. We first brought him home when he was less than a year old, 3.75 pounds, as a little brother to our other cat Gremlin. He came to the family after my cat Peabrain died suddenly.

Bebo died around Peach’s birthday, just as I was writing the post for her coconut cream puffs and the ins and outs of parenting. We happened to be out of town that weekend, attending my 20th college reunion in and visiting relatives in Illinois. I’m not quite sure when he actually died. Right before we left, I had a feeling that it would be soon. Bebo had been slowing down for a few weeks. About two weeks before he died, he seemed to get better. He was eating better. The new litter box seemed to be easier for him to use. He meowed to wake me up a couple of mornings, just like he used to do. While he had a noticeable slowdown in the last two weeks before his death, he had been declining slowly before that. He started to lose weight in the last two years. I considered that odd at first as he had always been a fat cat. At his highest he was 18 pounds. Then two years ago, a veterinarian told us that he had a non-regenerative blood disease after routine lab tests and further testing came back with anemia. There wasn’t anything to do except monitor with more tests, but for what purpose? I saw no reason to continue lab tests to confirm what we suspected. It wouldn’t change the diagnosis. There was no cure.

So we just tried to love him. I always likened his soft squishy belly to a roll of focaccia dough. He was one of those cats to also let you squish and poke his belly almost as much as could be tolerated. His grey fur was like cotton, so soft and fluffy. Peach loved to snuggle with him after she got home from school and at night. She would carry him around the house, to forts built with towels and pillows. She and Grub would make up a special cat bed for him, place him on ceremoniously, only to have him immediately and stoicly wander back to some warm pillow he preferred. As Bebo lost weight, I could feel more ribs and vertebrae than fat rolls. The shine in his eyes was less kitten-like. He moved with effort. He began to sit alone, and refused to cuddle with Peach at night, normally an activity that the most purr-provoking of the day. A friend once told me that outdoor cats often cast themselves away from others when they are going to die. Our weekend visit to Illinois was perhaps a reverse of that tactic for our indoor cat: we left, it was private and quiet. And it was time to die.

We all miss you, Bebo. Peach has drawn pictures for you. We have missed your purrs and foccacia dough belly. The kids are ready for another pet; me, not so much. Whatever kitten we bring into the house, we will see you.

Other memorium: scallops with mexican corn salad (and ode to mary),  one-eyed-chihuahua cocktail