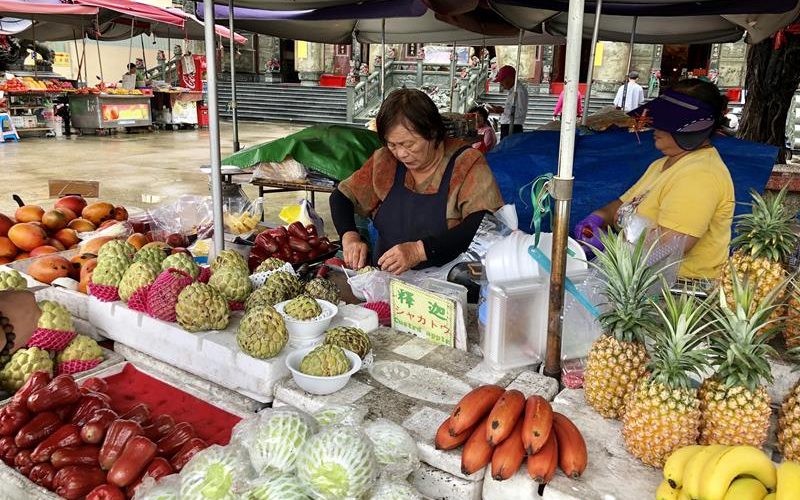 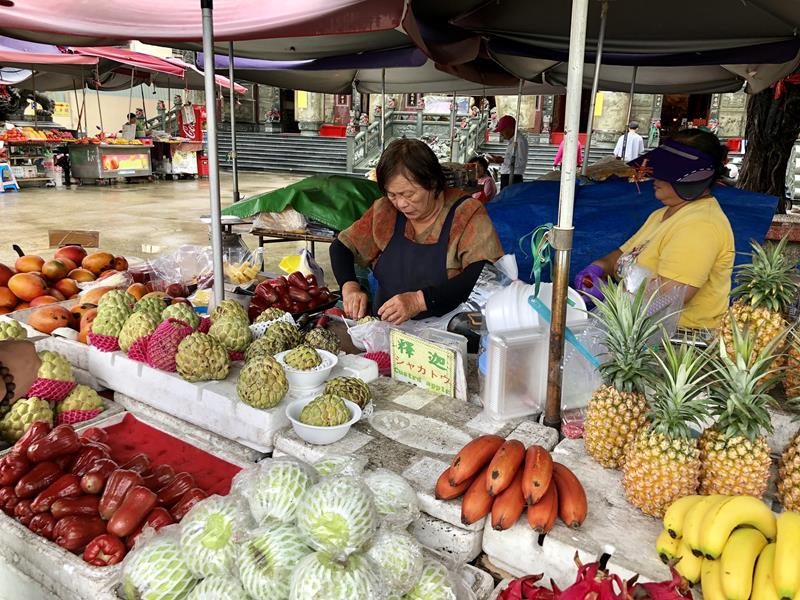 My first two posts from our Taiwan trip are here (Taipei) and here (Kaohsiung, part 1).

Day 7: On our last full day in Kaohsiung, we hung closer to the city than the day before.

A little more of Kaohsiung’s history: Hokkien people immigrated to this area of Taiwan in the 16th and 17th centuries. (Hokkien or Hoklo refers to immigrants from an area in Southern Fujian, China and usually means the ancestors immigrated to Taiwan before 1949, per Wikipedia). The region was first called Takau or Takow. One origin story of the name (there are many) is that the word Takau may have come from the aboriginal Siraya language meaning “bamboo forest.” The Siraya (西拉雅族) were, and still are, indigenous peoples occupying the flat, coastal regions of the Taiwanese Plains. The word morphed into Tancoia for about 30 years when the Dutch colonized the island. Takau reappeared in 1670 after the Dutch were thrown out of the country around 1662 (yay!). That name remained until 1920 when it was japanified to Takao. When China enfolded Taiwan into its body after Japan’s surrender in World War II, the name remained but was transliterated as Kaohsiung (高雄). Interestingly, the name “Taiwan” is also from the Siraya language, one variant being Taiouwang or 臺員. The Siraya are also thought to be the first peoples on the nearby island of Xiao Liu Qiu (Turtle Island; 小琉球). There is sad but important history on that tiny island: the Xiao Liu Qiu Massacre of the Siraya people in 1636 was retaliation from the Dutch when their shipwrecked sailors were killed by the Siraya in 1622 and 1631.

(If one travels enough, there are always going to be stories about death. So let’s move on….)

Every day in Kaohsiung, we were inundated with rain. There were massive downpours that lasted ten minutes or so, with intermittent thunder and lightning, the skies often clearing to hot sun. The humidity was thick, so thick. It was like walking through a sauna, only I was fully clothed and no cooling shower until the end of the day.

We were on our way to the Dragon-Tiger Pagodas (龍虎塔) at the manmade Lotus Lake (蓮池潭) when the rain pummeled us again right as we stepped off at the nearest bus stop of the Red Line’s Bus #35. Even in the gray and watery sky, I could see the bright colors of the pagodas and temples across the horizon. The bright building in the rainy gloom is Five Mile Pavilion (Wuliting; 五里亭). We’ll get to this later. 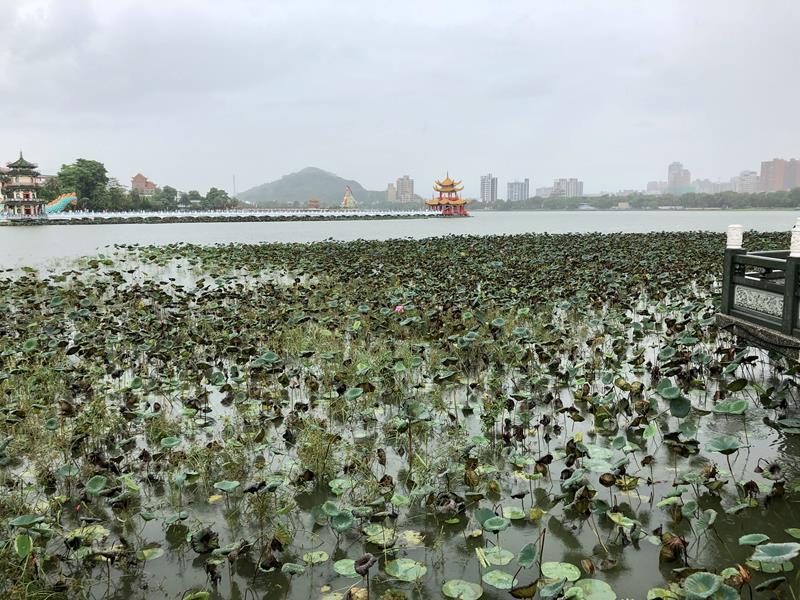 Lotus Lake is aptly named. When in season, I bet the blooming lily flowers are lovely. The Zuoying District where the lake sits was first established in the 17th century as a military fortress called Old Fengshan (鳳山) — from the little time I’ve spent in Taiwan in my lifetime studying maps and railway signs, I’ve figured out that shan means mountain (山). The district was renamed during Japanese occupation, transliterated more than once to eventually be Tsoying after World War II by American military.

Gueishan (Turtle Mountain; 龜山) and Panpingshan (or Banpingshan) (Half-Screen Mountain; 半屏山) are in the distance. I’m pretty sure the above photo shows 半屏山. Though not visible in the photo, nearby the lake stands one of the largest Confucius temple (高雄孔子廟) in Taiwan (at 400, Liantan Road, Zuoying District). We walked to see it after visiting the lake, but it was closed. Peering through the gates, we noted the open courtyard, bright red accents on the buildings, and blazing sun. 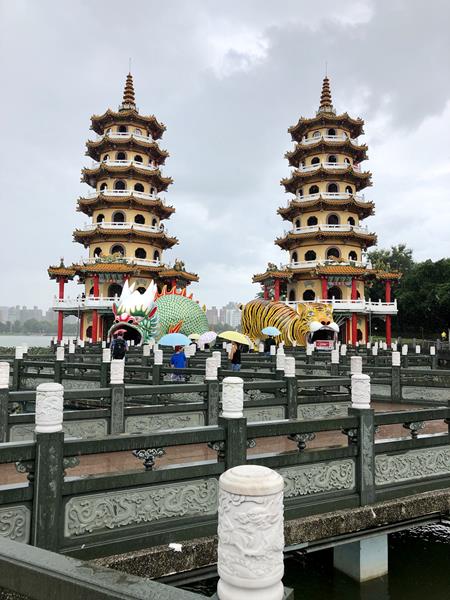 The Cihji Palace (慈濟宮) [also called Baosheng Dadi Temple (保生大帝)] across the street owns the pagodas. The dragon pagoda is on the left, the tiger on the right. Dragons symbolize power and strength and control of the water (perhaps the rain the day we visited). Tigers symbolize prowess and harmony.

Study the levels of the padogas. There are seven levels in each which probably symbolize the Seven Factors of Enlightenment: Mindfulness, Investigation, Energy, Joy, Tranquility, Concentration, and Equanimity. Pagodas all over the world tend to have an odd number of levels.

Chinese culture says that one must enter through the dragon’s mouth and exit from the tiger’s mouth to wash away all your bad luck and increase your good luck. The kids were interested if we’d exit out of or enter into the buttholes. We did not. Proof below: no buttholes visible from the back end of the tiger or dragon. 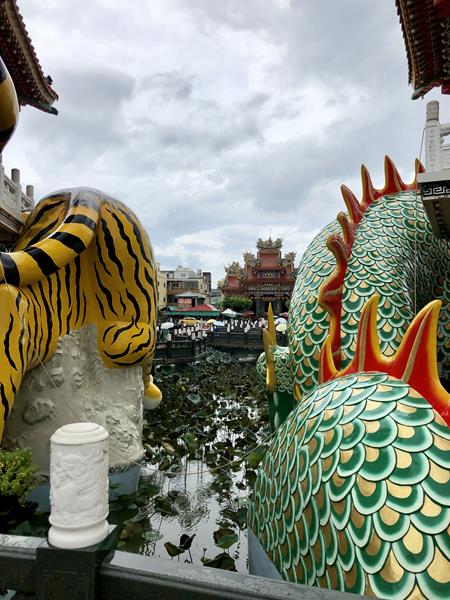 Cihji Palace was initially built in the 17th century, then converted to a Japanese military base during World War II (unclear if there was destruction per the history I read, but I’m pretty sure Japanese imperialism tried to stamp out anything Taiwanese). The current palace was rebuilt in 1959 after having been moved to the Zuoying District in Kaohsiung. Under the auspices of worshipers of Baosheng Dadi (the Chinese god of medicine; 保生大帝), the pagodas were built in 1974 and have become one of Taiwan’s most recognizable landmarks.

On the walkway looking to Cihji Palace, there are nine bends to enter the pagodas. The number “nine” has the same sound as “forever.” 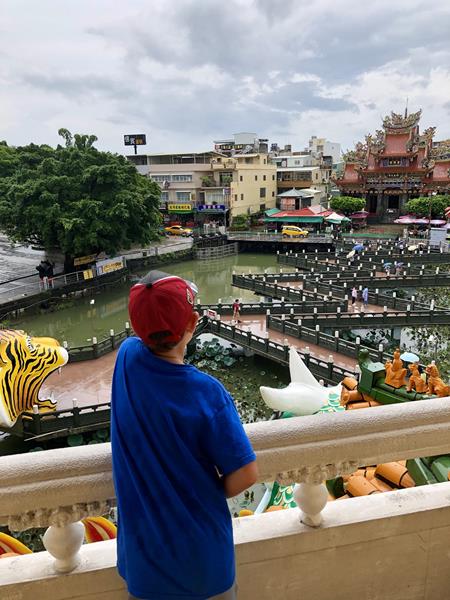 Above is another view of the Palace but looking from the Dragon Pagoda. I think Grub is up on the third floor here.

We stopped across the street at Cihji Palace to purchase fresh lian wu (蓮霧) (wax apple, water apple, or rose apple) and shi-jia (釋迦) (sweetsop, custard apple, cherimoya, or Buddha’s head). Nahmbu is the Taiwanese name of lian wu. Nahmbu is crisp like an apple but less grainy. It’s the shiny bell-shaped red fruit in the front of the photo, the shi-jia is what the woman is cutting up. 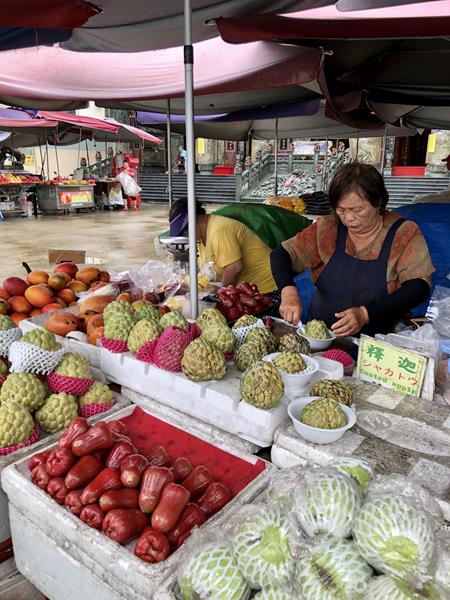 The shi-jia is a creamy ivory fruit with hard brown seeds. It tastes a cross between a banana and a lychee. 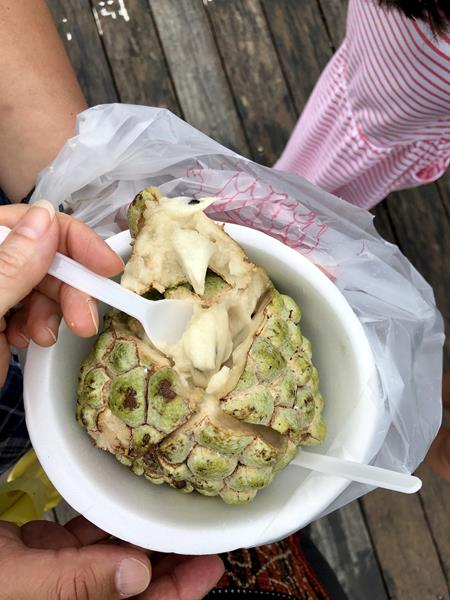 The Cihji Palace architecture was absolutely exquisite. I can’t believe buildings with such intricate detail can last through typhoons. The upkeep shows. People very much respect these spaces and help keep them looking beautiful. 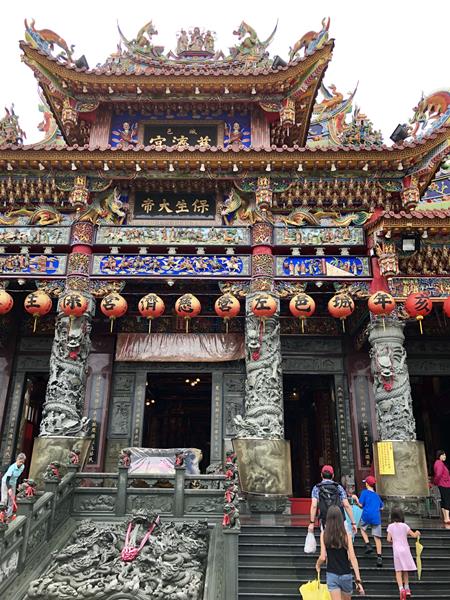 We walked past the Spring and Autumn Pavilions to the smaller Five Mile Pavilion (Wuliting) (五里亭), a long concrete path over the Lotus Lake connecting them. 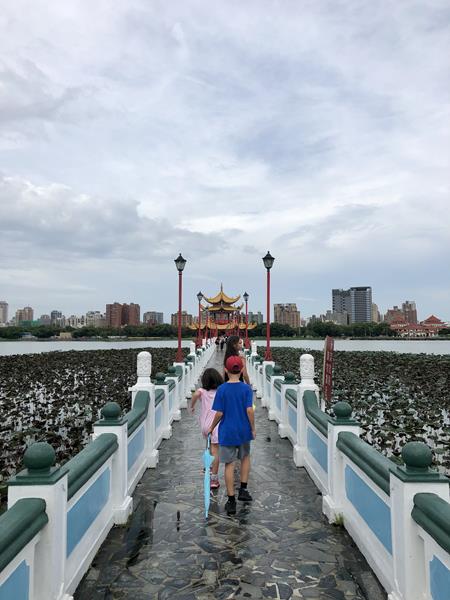 Below is one of my favorite views from Wuliting. I like the contrast of the gray water and sky with the brightly colored buildings, like beacons in the gloom. 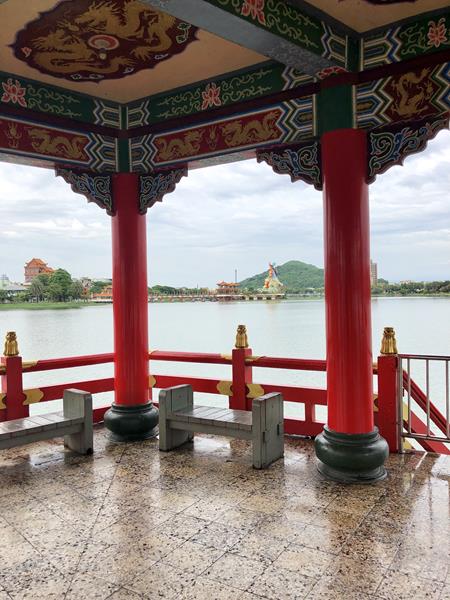 We climbed Wuliting to its second story and looked to the Spring and Autumn Pavilions. Chi Ming Palace (啟明堂) was ahead and looks similar to Cihji Palace. Chi Ming Palace worships Confucius and Lord Guan (a deified military commander from long ago). 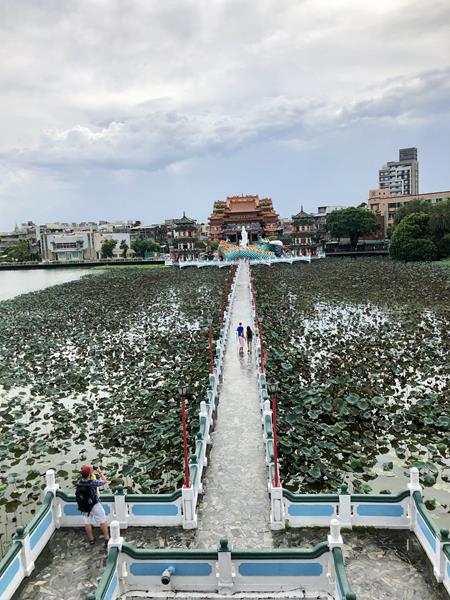 Another pavilion on the pond was the Pei Chi Pavilion (北極亭). A 74 foot tall statue of Xuantian Shan Di (玄天上帝) sits here, the Supreme Emperor of the Dark Heaven, or the God of War. 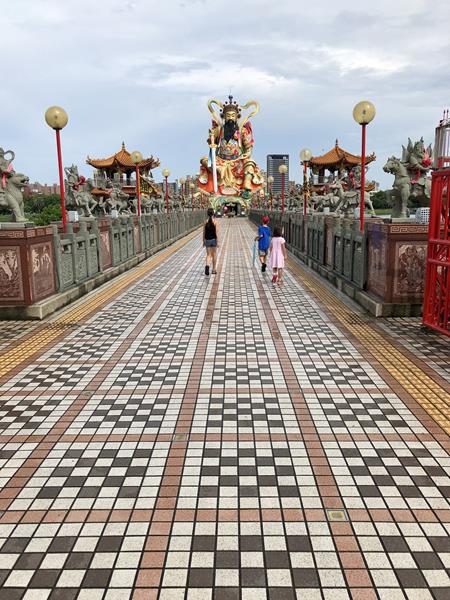 Legend has it he was once a butcher who eventually felt remorse for the animals he killed, gave up butchering, and moved to a remote mountain to study the Tao. He helped a woman give birth and proceeded to clean her clothing in the river afterwards. The woman ended up being a manifestation of Guan Yin, the goddess of unconditional love. Xuantian Shan Di dug out his stomach and intestines to redeem himself of sins so overwhelmed was he to see her, washing the offal in the river. The water became murky then eventually turned to pure water, clearing his sins. (Yay! But apparently couldn’t eat anymore because no stomach or gut — but ripping out his guts was his path to immortality). There was also a small island off of the pavilion housing chickens and ducks, perhaps a remembrance of Xuantian Shan Di’s former career. 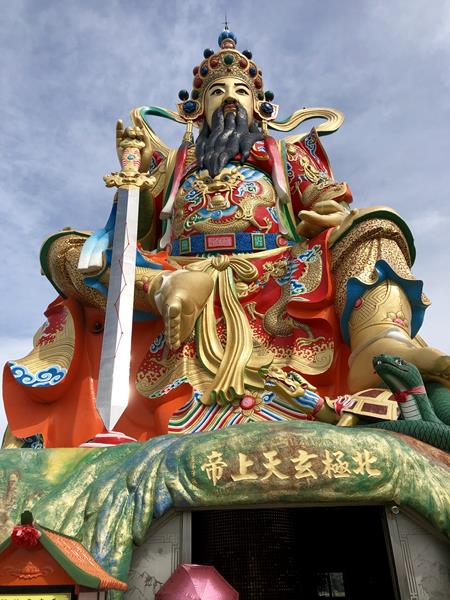 Situated just above the poultry island was this tree hung with votive tablets. A sign deemed it the “Wish Tree.” 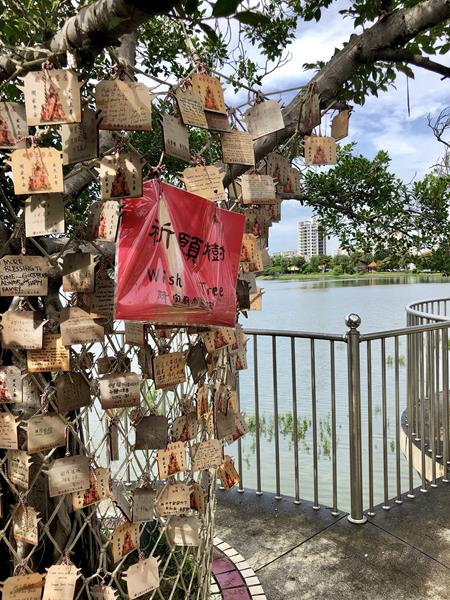 We took a long walk back to a train station, stopping at Zuoying station for dinner and dessert. Mochi balls with tiny faces are never not cute. I ordered this dessert for the textures: I liked the creamy matcha ice cream, crunch of cereal (basically, Sugar Snaps), chew of the red beans, and squish of the tofu and jelly. I almost ordered another one. 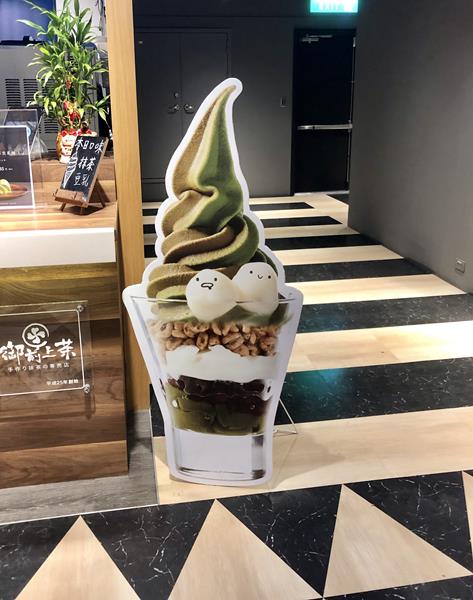 We headed back to the train platform so we could go home to the apartment. We were accosted by marshmallowy toys with creepy, cute smiles. So many in machines lining a game arcade in the station complex. 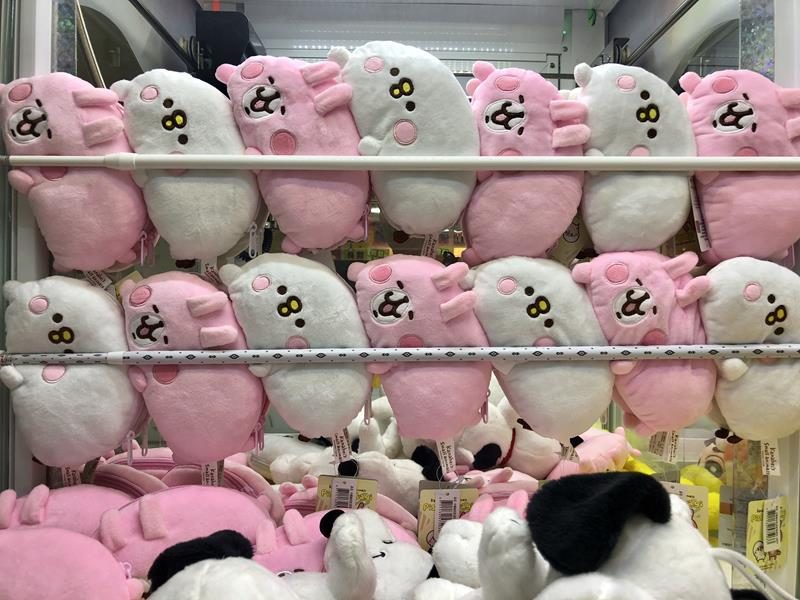 Next post, we head from Kaohsiung to Chiayi for the night market….

One year ago: fondue with IPA

Five years ago: one-eyed chihuahua cocktail, almond celery salad and what to do with a monster zucchini?

If you want to visit the posts from our Japan trip in 2017:

One: Tokyo and Mount Fiji