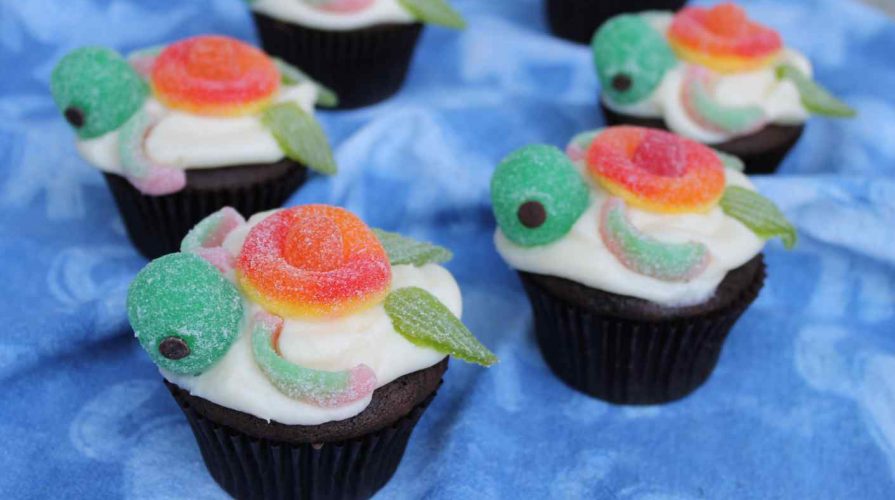 Since my coup with land snails, I tend to my garden a little more diligently than I did in the past. Grub occasionally helps me with some of the outlier escapees by smashing them with a stomp. My garden has not flourished as much I hoped this year; we had another unwelcome visitor instead. One that Grub actually thought was worth maybe not smashing.

I happened to be unsuccessfully pruning some of the plants, noting my corner tomato plant tipping over from its weight of green tomatoes, and I noticed a 3-inch long guest. A tomato hornworm hung gracefully from a branch of my tomato plant, as if in a yoga pose, meditative and still. I left the caterpillar there, in repose, only realizing later that it was cause of yellowing leaves on my sweet Sungold tomato plant, it being in the process of decimating my plant. using an aspic/jelly cutter to make back fins

So I did what any mother with a dirt-loving, sweaty boy would so. I snipped the vine on which that caterpillar hung so unassuming, right in a large mason jar. Now we could watch the caterpillar chew up tomato leaves of my choosing away from my sweet Sungolds, and watch it eventually become a moth. But not shake the jar when doing so. Or kick it. Or squash the caterpillar for fun. This was a life science project for the kids, not one of animal cruelty.

The kids were fascinated watching it chew up leaves, defecate excessively, and move occasionally. They told the neighborhood kids. We talked about it with relatives. They asked frequently when we’ll see the butterfly (I explained multiple times it would be a moth, but neither Peach nor Grub are convinced moths can come from caterpillars). Eat has a totally different take. While he likes the learning experience for the kids, any wormy creature absolutely grosses him out. It might as well be a tarantula or spurting flesh wound. And so I’ve been the caterpillar guardian through this jaunt, Eat demanding that “that thing” isn’t near the house. So “that thing” grew to 5 inches long, as wide as my index finger, fat and happy like a cheery, gluttonous cartoon character. It remained this way for days, eating every leaf we put into the jar until the nubs of stems were left. On September 8, I watched it wriggle purposefully into the dirt until it was entirely covered. I had just festooned the jar with a new frill of tomato leaves, ready to watch our pet nibble away. But the now burrowing caterpillar ignored any more of its favorite food for the cool cloaking of the soil. And then it happened, like magic. First pulsing green, then dusty with dirt, the once green eye-spotted undulating creature voraciously defoliating my tomato plants, grossing out my husband, turned into a senescent brown pupa. The brown pupa, jug handle like one on an ancient water jug, sits in my one-quart Mason jar, waiting to be transformed. It took eight days for that jug handle to appear, the pupa gently wriggling in the soil as I tapped the jar at first look. The kids were underwhelmed; the undulating green thing was much more novel. Eat was still totally grossed out. Ewwww,  he would shudder, even at my mention of the pupa. I reminisced when my dad, brother, and I found a maroon-colored pupa in our family garden one fall, tilled up among the potato plants or the withered corn, I don’t remember. It over-wintered in a peanut butter jar, cozy in the blanket of soil, then emerged as the weather warmed, wetly opening its wings, drying its body, to forever etch my memory of the markings of a Cecropia moth. note the gumdrop (left) and spice drop (right) sizing: only use the spice drops for turtle heads if you want to make a bunch of pinhead turtles

And so is the transformation of a child, from year to year, season to season, it seems. While my Grub is still my baby boy, wiggly and voracious like that caterpillar, he is transforming into an independent boy. Grub will develop his own jug handle, seemingly take a hibernating sleep, and awaken to a young man before I realize it. He loves dirt. And cars and planes. And to kick soccer balls. He is sticky and sweaty most of the time. In the last year, he has not only grown taller, denser, and hungrier, but a more loquacious and active kid. His pants are now too short. He eats like a a snake, slow and controlled, often stalling family meals when out at a restaurant. He talks constantly, using words like “irritated”, “delicate”, and “bulldozer”. He’ll announce his bodily functions to everyone. “Mommy! I need to wipe my nose.” Grub explains after picking his nose and wiping the snot on (a) his shirt, or (b) the couch, or (c) both. “Mommy! I’m dry again today!” He announces this frequently after remaining continent all day, his Buzz Lightyear underwear a proud show piece in the bathroom at home as he gets ready for a bath. And he gets excited about animals, even wormy, creepy-crawly ones.

So why didn’t I make caterpillar cupcakes? I loved the idea of partially stuffing a gummy worm into dark, faux dirt topped cupcake. Eat put a stop to this as soon as I mentioned it, his worm phobia vetoing any consideration. Grub and I decided that turtle cupcakes were a good idea for our small family party instead. I know he’ll move on from turtles and trains, and even thinking that I’m a cool mommy with fun desserts to cool friends with fun cars that he might want to drive. But for now there are still plenty of hugs and kisses for me. “Mommy, I really  love you,” Grub will say randomly, usually while stuffing his face with food that he enjoys, then sleeps, still looking like a baby, my  baby, like a cocoon, and awakens one day older.

Happy Birthday, Big Man. You are growing up fast! I love you.

One year ago: pandan spiral mooncakes

Need some cupcake recipes? My carrot-pineapple one is great, as are the lemon and brown sugar ones. The one I used for the turtle cupcakes is actually FROM A BOX. I finally took some advice from a friend that the kids don’t care about the fancy homemade cupcakes, so why bother making them if not inspired to?  They just want the frosting and candy anyway. I’m too tired and Sky-Girl not tolerant enough of any lengthy kitchen follies these days.