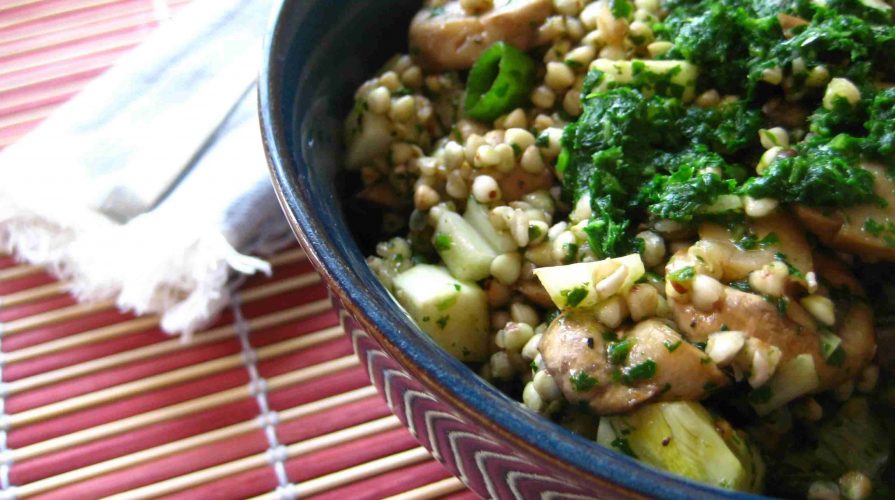 choose some buckwheat for your salad :::: Once upon a time, Americans understood the importance of buckwheat in cuisine. For whatever reason, we have pushed it aside. Always interested in grains that usually are underrated, buckwheat was an easy target for me. It stared at me woefully in the store, ignored, shoved to the back of the shelf of grains. I was sure I heard murmurings of we are the chosen ones! when I slipped the vacuum-packed bag into my shopping cart.

Chosen ones indeed. Numerous countries over the world treat buckwheat with respect. Soba noodles from Japan are made from buckwheat. Russian and Polish families use it to fill knishes and blintzes. In the days of colonial America, people appreciated buckwheat pancakes. It is also gluten-free so anyone with celiac disease can enjoy kasha, buckwheat blinis, or a peasanty buckwheat porridge. For a number of reasons, buckwheat fell out of favor for mass production in the United States, replaced by more profitable crops. Food is not just about money, people! I’m here to bring back buckwheat to our kitchens.

This recipe is definitely non-existent in the meat, but heavy on flavor. The addition of the meaty mushrooms with the crunch of fennel and the surprising starring role of the parsley is satisfying and different than anything I’ve tried before. The ebullient food writer and blogger Melissa Clark

has a knack for appreciating and transforming traditional dishes with a more modern take. This is a healthy version of her grandmother’s kasha varnishkes— better than any kasha I’ve ever had. Varnishkes refers to kasha served with onions, brown gravy, and pasta in Jewish culture. This is definitely a different spin. Extremely hearty, you will not miss your meat for a meal. Make buckwheat your chosen one. This dish does well as a side to a tumble of steamed vegetables or light protein (eggs, tofu). As always, my hints are starred below.

Save Print
buckwheat salad with mushrooms, fennel, and parsley oil
Author: story of a kitchen (via Food & Wine, December 2006)
Recipe type: salad
Ingredients
Instructions
Notes
* I put all parsley in with oil, even though the original recipe called for just a cup in with the oil. Parsley is sometimes rather tough to chew so I let my food processor do the pre-chew for me. Important trick for getting the parsley out of the boiling water fast: keep it tied up in a bunch, dip into the boiling water with tongs for the 20 seconds keeping hold of it, then immediately plunge into the ice water. Cool slightly and drain (as described above). Using your hands, cleanly twist off the leaves from the thicker stems (and twist tie). No search-and-rescue operation needed to find all the parsley stems and leaves in the water. ** I cheated here. The quality of mushrooms at my go-to place for fun and funky mushrooms was reprehensible, more like bad funky, so I went with the standard white button mushrooms. *** What? Not mandoline sliced?? I know I went on and on about the beauty of mandoline sliced fennel for another salad, but in this hearty buckwheat recipe, the fennel stands up well to being diced and paired with the hearty buckwheat. Slicing it too thin and mixing with the buckwheat might cause some heavy-weighted buckwheat to smash the delicate fennel. Not so pretty.
Wordpress Recipe Plugin by EasyRecipe
2.1.7
If you love this, share it!