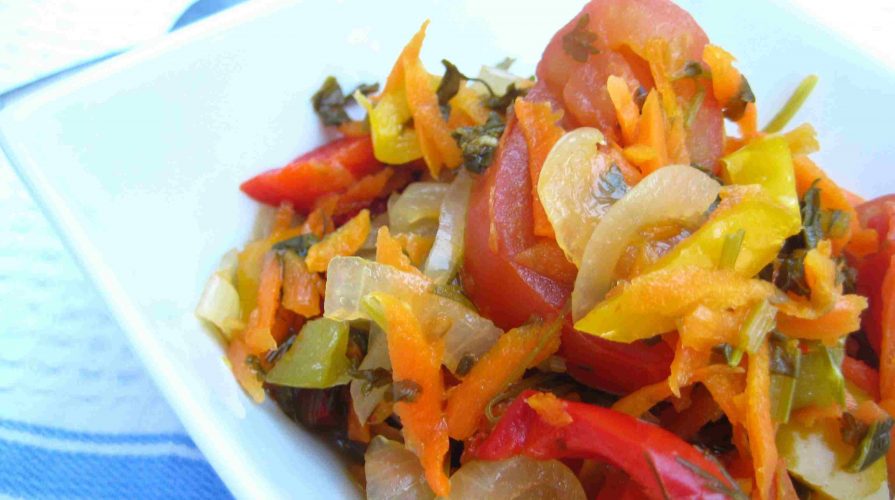 After moving to California and soon after giving birth to my son, I have been lucky to meet many of my neighbors with young children. Peach rides her bike with #5 and #8, waves to little #4, and says hello to #14. Number 14 is my friend Ruslana’s daughter, too young to jump on a bike with Peach but old enough to squeal at the sight of Grub and nice enough to share her toys with him.

The babies roll around as we mothers, Ruslana and I, discuss job-hunting tactics and frustrations with the work-life balance of the working mother. Since my days often revolve around what we will eat for dinner, and whether Peach will actually eat said dinner, the conversation often falls into that predictable pattern of my food blog and any new recipes I might try. I’ve always expressed interest in authentic ethnic cooking, and Ruslana has been nothing but supportive and informative about her family’s cuisine. When shuffling through a local Russian market with Ruslana, I noticed jars of Danube Salad. Ruslana explained it is typical dish made where she grew up in the Ukraine, also mentioning that her mother would make bottles of it, storing them for enjoying in the wintertime when such vegetables were more scarce. “Let’s make THAT,” I said to Ruslana, as I fingered a jar. I’m not sure what possessed me to say that, or even assume that it would be possible. I’m not a marinated-salad kind of person. Jarred vegetables aren’t exactly aesthetically appealing. But it started from there. A time was set. The ingredients were bought. And we began. Amid the flurry of washing the vegetables thoroughly, chopping them, was Ruslana translating her mother’s utilitarian instructions from Russian to English. She always began with “Leeza!” to catch my divided attention to the kids’ mischief. It was a little difficult for me to tear my eyes from the fast-moving Inchworm (nee Grub), after he decided to attempt ingestion of a large dust bunny and ended up choking and puking on the floor. You know, the normal stuff that freaks a mother out when she thinks turning her back for a SECOND is okay. After getting gist of the recipe and writing copious notes, I decided I’d need to test the recipe, from the beginning by myself. One test was to go into a Russian market, unassisted, and ask for the 9% vinegar (“uksus”) and actually get it. “I’m looking for ‘uksus’?” I said, trying to look like I knew what I was doing and why I’d be asking for Russian vinegar. The elderly Russian-speaking gentleman manning the cash register popped up, wide-eyed, showed me the aisle, and studied it for a minute. He shuffled off, gathering the eyes of a bifocaled female colleague, who confirmed which vinegar was correct, though so subtlely, I stood around for another 5 minutes, assuming there might be another, perhaps younger, English-speaking clerk who could help. No such luck, so I grabbed my treasure and headed for the check-out queue.

Danube salad is special in that it is deceiving. Despite the jar and the ability to keep for months at room temperature, it is full of fresh flavor and crunchy like a spring-fresh salad. The broth can be used for soups (I saved and froze mine, waiting for a chilly soup-inducing day to use it). Cilantro and dill complement each other well. The bay leaves are sweet and strong, seeping flavor through all of the crunch. Very satisfying. Mind you, this is a lot of work. When I did this on my own, I somehow I managed to do this with a fast-moving almost 10-month old crawling on the floor. When I did the hot work, he was in the high chair, sometimes watching, sometimes screeching like a pterodactyl, demanding my eyes on his ever-present (now seven-toothed!) smile.

Be thankful for your neighbors. They may be your greatest teachers. I would have never learned how to make such a great dish if I hadn’t connected with Ruslana. And you know what? My salad passed muster with Ruslana’s family. I had excellent teachers. 5.0 from 1 reviews
Save Print
danube salad
Author: story of a kitchen (a special recipe from my Ukrainian friend Ruslana's mother)
Recipe type: salad
Prep time:  18 hours
Cook time:  30 mins
Total time:  18 hours 30 mins
Ingredients
Instructions
Notes
* I was assured that 9% vinegar was the "absolute best" and nothing else should be used. If you use the typical American 5% white vinegar, let me know if it works and what your overall results are. UPDATE 8/9/11: After consulting Ashley English's informative book Canning and Preserving, I realize how important it is to know food acidity for safe canning. High acid and low acid foods are processed differently. I see why using 9% vinegar is needed in this recipe as the mix of these vegetables does not hit the safety threshold of a pH of 4.6 without it. If you do use a lower percentage vinegar, I would skip the sterilization and store the salad in the fridge. Refer to her book for more great tips, even if you are a beginner. ** Do not cook too long or the vegetables will lose their crunch. Vegetables should remain brightly colored, the herbs just starting to dull in color. If you overcook, all is not lost. Your salad will not be crunchy but still taste great. *** Why? Stray vegetables bits on the mouth of the jar could prevent a proper seal when sterilizing. **** I had a problem with "jar migration" while sterilizing. As the water boiled, the jars would migrate in the pot to one side, so I had to be vigilant about scooting them back to equidistant positions. All this to fuss with while Grubly McGrub was screeching and throwing nylon spoons at me and the cat. ***** I learned from my mother than turning the jars upside down would help prevent a large airspace from forming between jam (or other viscous food) and lid in our numerous jam-making summers in Maine. However, if not sealed properly when upside down, there can be leakage of your canned food, therefore breaking the lid seal. Ruslana's mother did this "jars upside down" step but I wouldn't recommend it as this is a juicy product and seepage is likely. You don't want that seal to break after all of your hard work.
Wordpress Recipe Plugin by EasyRecipe
2.1.7
If you love this, share it!