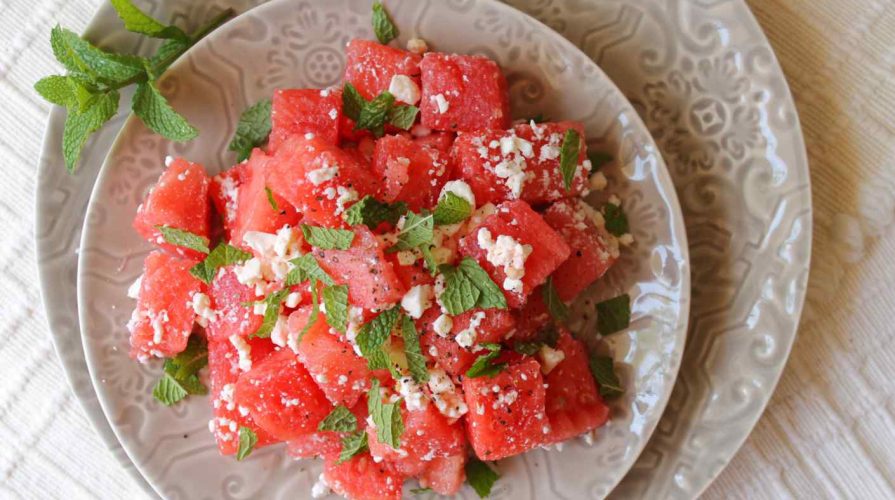 jumping on the bandwagon :::: I know, I know, I have some head shakers out there. The feta and watermelon combination may seem a bit odd. I was not a believer until I went to a BBQ hosted by my friends Jamie and Irving. We haven’t always been BBQ friends: we went to college together. They know my secrets. Dirt. Stupid crap that I did as a 20-year-old. The closest thing we got to a BBQ was when the TKE house had a toga party (yes, it is soooo cliche, but they did!) with a fire-pit roasted pig in the backyard. The Sigma Nu house, of which Irv was a part, had no regular grilling apparatus that I remember, but a substandard kitchen: grubby with cracked formica counters, a stove and oven that had seen better days, a fridge/freezer that likely housed new species of mold, and a reprehensible floor (I can’t even imagine how much vomit was rubbed into the linoleum). Did I mention the ants in the summer? I think I remember ants, basically taking the helm of that basement kitchen and turning it into an inside picnic invasion site.

One of our friends, Amber, decided to make chicken one night. She cleaned up that kitchen with soap (!) so she could cook. I didn’t even recognize the counters after she was done. Though still circumspect after that, I initiated some cooking in that kitchen. The boyfriend’s love of Hamburger Helper made an appearance for the first and last time in my life (then Eat admitted to me recently that he loves the stuff, too). We gently sauteed morel mushrooms in butter one spring, found on campus property. We made lots of mixed alcoholic drinks. A lot.

So, we’ve come a long way from that folly, sitting like normal adults in a Chicago single-family home, and on the deck, eating something as germane as watermelon-feta salad with mint. That one particular summer day, other BBQ invitees brought food to go along with the always-present, Irving trademark brisket and homemade salsa. There was my purple potato salad with gorgonzola and bacon that I brought — a hit — but also the watermelon-feta salad brought by another couple. At that point in my obsessive Food Network viewing and Food & Wine  magazine subscription, I had heard rumblings of this watermelon-feta combo. I was not impressed, assuming it was another food fad. I’m not much for fads.

But then, I hadn’t actually tasted it. I just assumed, like Peach and Grub often do when faced with a new food item to try, that it may just taste weird.  Remembering some kitchen wisdom on flavors, I realized the beauty of the complementary flavor combination. You have sweet, brought out by the salty, the fresh coolness of the mint, and subtle tang of the rice vinegar. And it works. It’s good! When I tasted it at that BBQ event, I was glad to have the witnesses to say that I had tried it.

The problem is that when there are young children in the house who see fruit far from the sprinkle of salt or savory, it’s hard to keep enough watermelon sequestered for Mommy’s little food blog fun, away from little mouths and big bellies. I may have to try this salad at a potluck, when there will be competing dishes for my kids’ attention. Like Jello. And cake. And chocolate covered whatever. I’m okay with that, all for the sake of my watermelon folly. And perhaps forgetting some of that stupid stuff I did (and ate) in college. Hamburger Helper, really?

One year ago: peach sauce (or baby food)