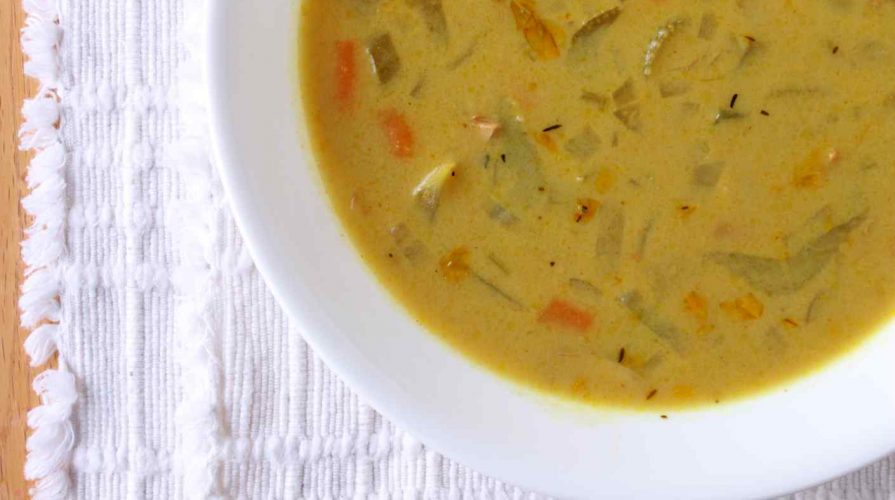 memories of pepper water without chaos :::: Ah, rich, creamy soup. There’s nothing better for comfort food. This recipe still conjures up relaxing weekends, sleeping late on Saturday mornings, and the nip of autumn or a breezy late summer day. But just like the transformation of this soup’s ingredients over the years, so has my typical weekend activity changed. The mulligatawny soup we know today is not what one might eat in southern India; it’s a tamed down version of a peppery Indian soup popular in the late 18th century, adjusted by British colonialists for Western tastes. Rich with cream and curry, it is often hearty with chicken, onion, celery, apples. and rice. This is the version that Eat and I first encountered in  The Joy of Cooking  cookbook before we were married, often preparing for our Friday night meal after the both of us had had a long week of studying. It was on our honeymoon in England that I had another version, apparently a vegetarian one, made with creamy lentils topped with cucumbers, rice, and almonds. That confused me: I was convinced that my original version was outright wrong and even more Anglicized that it should be. For years, I searched for another version with meat to get the most authentic recipe. It was only after a history lesson that I realized that both versions were authentic. Most of all, mulligatawny is open to some interpretation, given the evolution (or devolution?) it has already made from a shift from one culture to another and likely availability of ingredients.

It took too long to reprise this recipe in my kitchen, without the calm Friday nights Eat and I are used to. Fridays tend to be just as busy as any other night with the kids, with nary a quiet minute [excepting the prelude to a scream after one child has been 1) hurt; 2) picked on by the other sibling; or 3) both]. Despite the weekend chaos and the soup bearing little resemblance to its original state, they have moments of bliss.

One year ago: bacon butty and browned butter-rosemary-lemon popcorn