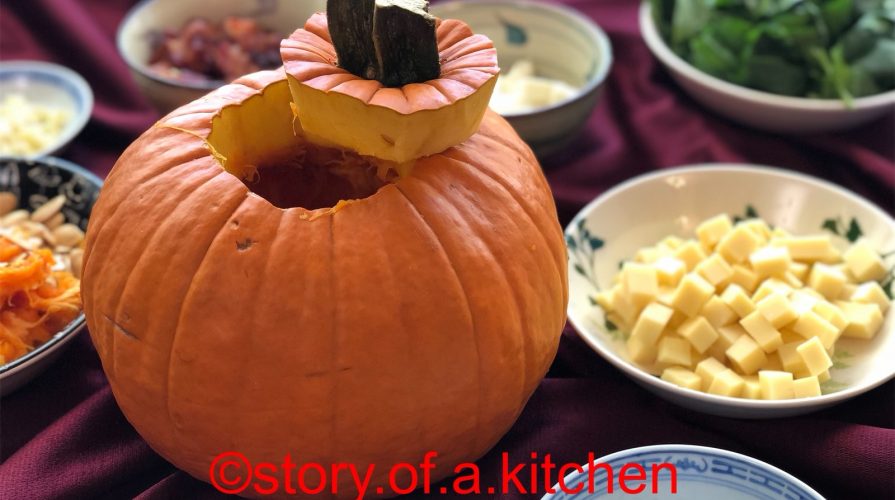 forget pumpkin pie! forget dessert! this is everything good with pumpkin. :::: 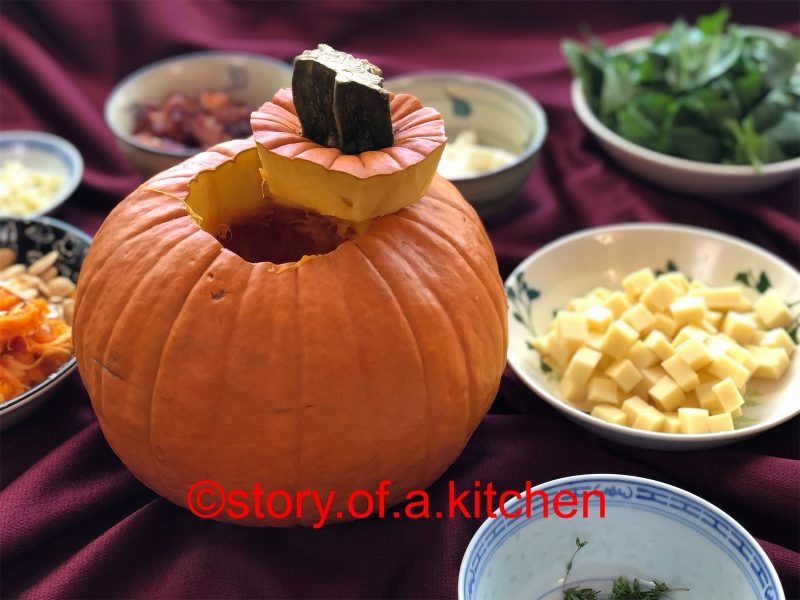 After 10 years, I offer something extra special for this anniversary. The traditional 10-year anniversary gift for married couples is tin. Just because something is tradition, does not mean it has to endure for the sake of tradition. No need for tin. Let’s do pumpkin instead.

The past year hasn’t exactly been a great one while we all swim in the undertow of the CoVID-19 pandemic. I may have baked more bread this year than in recent years, though I did not step up my cooking game like some people did under the pressure of restaurant closures and limited socializing outside of the home. I’m still doing about what I was doing before.

I have, however, been a little more interested in trying some fun, new things lately, because the yeast breads started getting a little old for everyone. The scent of freshly baked bread has not lured the children in as easily nowadays. They gravitate to the pantry for Oreos, Cheetos, Takis, Pepperidge Farm Milano cookies instead.

But, bacon. Bacon gets them every time. If I cook it for a recipe, I buy double and have extra on hand to nibble on. It seems to disappear if I’m not monitoring carefully. This stuffed pumpkin recipe is actually called “pumpkin stuffed with everything good” from Dorie Greenspan, the first being the bacon. That’s how I convinced everyone into trying a bite: “Hey, there’s bacon in it! Really!” I adjusted some of Dorie’s suggestions on what is good in a pumpkin to include different types of cheese and spinach. That’s the beauty of this recipe: you can totally adjust to make whatever stuffing you like and encase it in a pumpkin shell.

The prep is a little arduous, needing to hollow out the pumpkin and chop/cook the stuffing ingredients. Sounds kind of like 2020: We have so many little bits, so many things to try to shove together to make something good for awhile. In the end, it does work out ok, even if it’s different than what we’re used to. I hope your 2021 is stuffed with everything good. I’m tired and ready for an upswing.

Sooooo, some of the players (from top left): chopped garlic, bacon, mozzarella cheese, spinach, cream, bread cubes, Gouda cheese cubes, 4-5 pound pumpkin, and its leftover seeds. (I was going to roast the seeds separately but got lazy and never did.) 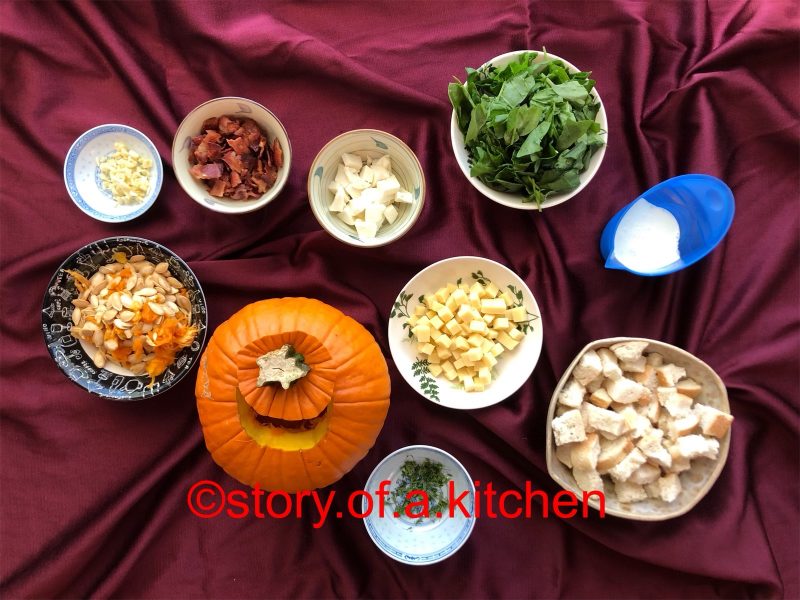 See! See! The pumpkin looks a little beaten up but it’s still holding its shape–hello, 2020 and the human condition. 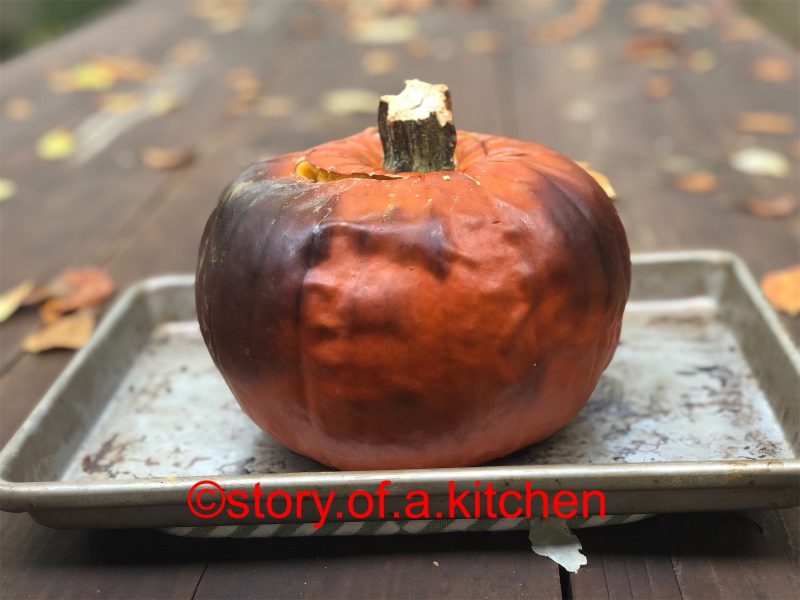 Cut it like a tall cake like I did below. The sweetness of the roasted pumpkin is delicious with the savory, creamy filling. (And the area on the upper right where I held it to cut looks like the Star Wars’ Death Star.) 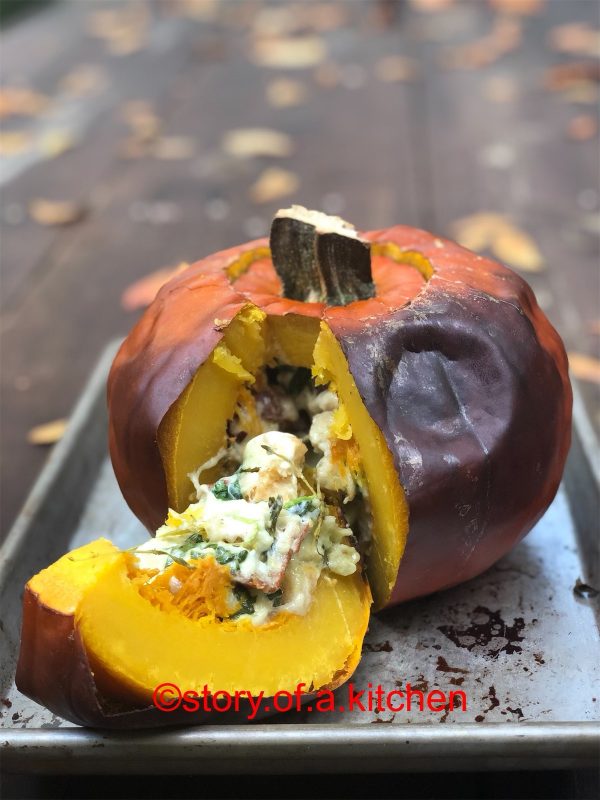 Ok, 2021, I’m hoping you can climb out of 2020’s mire. Like I’ve said in recent posts, readers – when the CoVID-19 vaccine is available, get vaccinated! Let’s bring our world back to a place where we can physically be together more easily (and share more bacon).

Here’s to 10 more years stuffed with everything good!

Four years ago: I took a break and hired Mui Tsun to redesign the site.

Five years ago — This is such a fun post and one of two posts on the blog where I am in the photos! I made and wore a dress made from fresh brassica and allium greens, a necklace of grapes, and rosemary in my hair.

Seven years ago: polenta chips with rosemary and parmesan