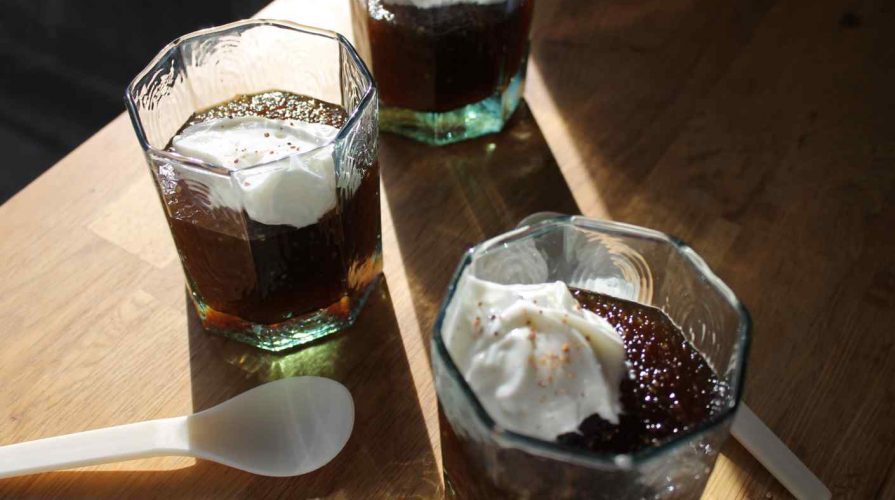 You are going to accuse me of duplication. This coffee tapioca looks very reminiscent of the coffee gelée I made in the past. I was immediately attracted to the tapioca for one selfish reason:  to clean out my cupboard. Just like the coffee gelee, you can top it with Greek yogurt instead of the whipped cream if you want to go a little lighter.

But what also attracted me to this recipe was the ease of making it (something I’ve been focusing on as of late with everything seeming to be always busy in other aspects of my life) and the coffee. I love the smell of coffee. I like cream and sugar with it usually. I just wish I could drink more coffee beverages; the caffeine is the sticking point. Any caffeine for two days in a row for me, and I’m a jittery, headachy mess the next day if I don’t have more of the liquid bean. Decaf is a fair substitute for taste without the side effects, but really not the same.

And this recipe just didn’t compare to the previous gelee recipe. While I followed it to the letter for cooking the tapioca, I felt the overall consistency was too rubbery. Eat sampled it too, and had the same report. Not easily deterred by a recipe like this, I decided to change the instructions, make some changes, add a little cream. My childhood memories of tapioca were of silky, milky pudding-like desserts, custardy and rich. Adding a little cream into the mix helps loosen the consistency and give a better mouthfeel to the dish. I also recommend serving this in 6 small glasses, as too much tapioca, rubbery or not, feels like a weight in one’s stomach (and mitigates the unwanted caffeine side effects for me). One could argue after my recipe fiddling, that this dessert is less the coffee gelée‘s doppergänger and more of a twin to the traditional custardy vanilla tapioca with a dose of caffeine. And regarding my gestational diabetes: no, this is not a blood sugar friendly recipe. One bite is all I need, caffeine and sugar both unwanted at this point in my life.

If you like doppergängers of all sorts, there is an ongoing non-food project that might interest you. Ever wonder if you have a twin, but not by blood? Is there a look-alike of you out there, somewhere in the world? The Canadian photographer François Brunelle is documenting people from all over the world with such traits. Gathering at least 200 look-alike unrelated couples before creating a book and going on a visual tour takes more than a few months. Brunelle has been working on this project for about 12 years, I think, always looking for more people willing to be photographed with their “twin.” Check out his website for more information.

One year ago: chawanmushi