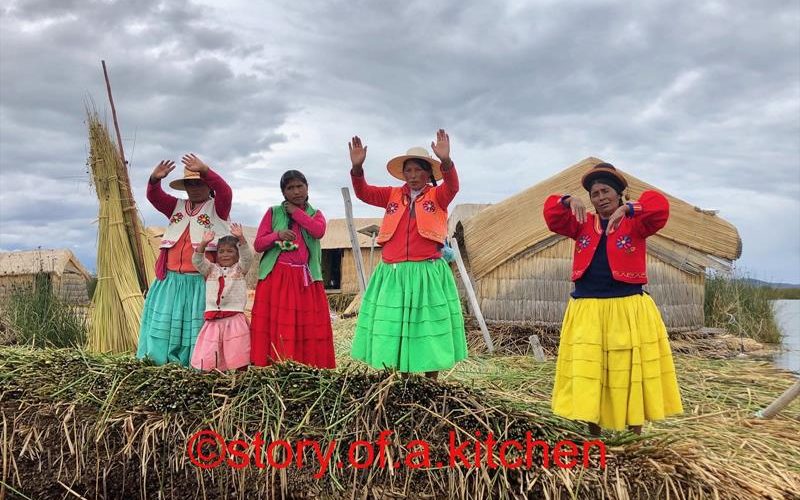 the magic of peru continues to amaze me :::: 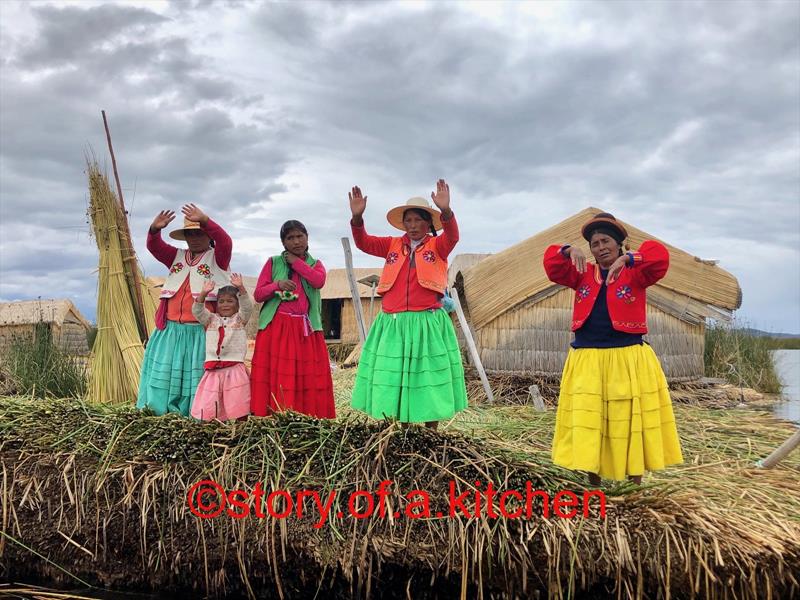 We traveled around Lake Titicaca today, to visit the floating Uros Islands. We hopped on a ferry boat in the morning in Puno, our guide Victor relaying basic history during the 20 minute ride. Lake Titicaca is the highest and largest navigable lake in the world at 12507 feet above sea level. It is also the largest lake in South America. Both Bolivia and Peru wrap around the lake, each debating exactly how much they have land rights to. (It’s really about 50/50.) Titi means puma or lead (as in the metal; also the symbol of strength and wisdom) and caca means a crack or gray, or mountain/stone, referring to a sacred stone found on Isla del Sol, an island found in the southern part of the lake. While many other ancient cultures lived around/near the lake, the Incas are the most well-known.

The floating Uros islands comes about as an escape about 600 years ago from warring peoples on land. The Uros peoples, also called Uru, escaped from Inca conquerors. They first escaped on boats built with reeds, then developed the floating islands with a similar principle to building boats, in order to house larger communities. According to Victor, there are now about 100 floating islands, each housing 4 to 6 families or about 25 people. (There are about 35 solid-ground islands in the lake, however.)

We were greeted on Kari Nativo, an island of about 24 people. The sky is gray, rain hinting arrival in the distance. Victor tells us Puno and the islands have two seasons: cold and dry or cold and wet. 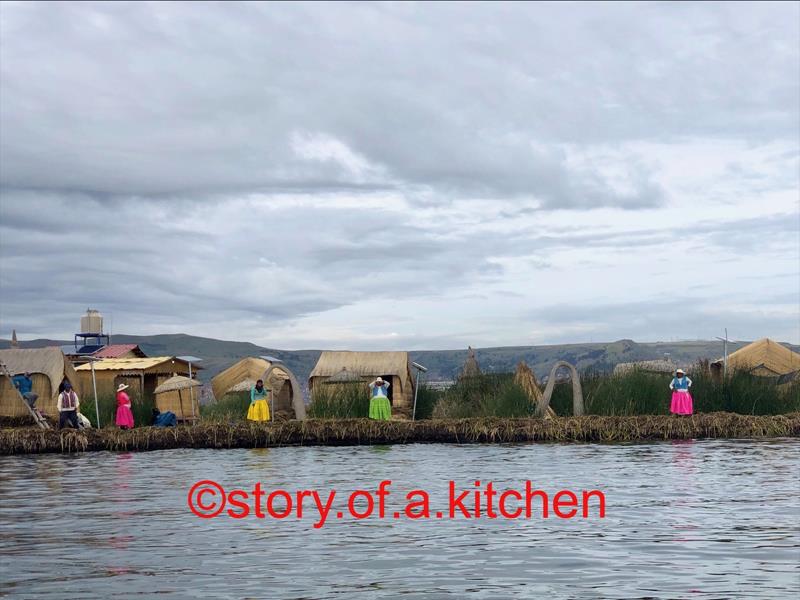 I stood on the Kari Nativo’s ground, thick and spongy with flora. Totora, a marram grass that grows in the lake, builds and lines the islands from their white root to their green tips. 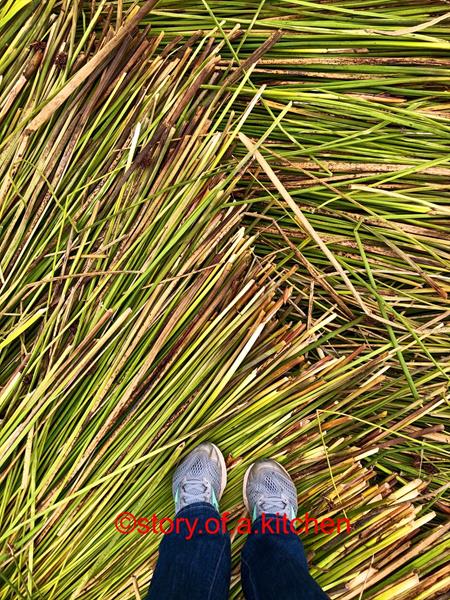 To build an island, one must cut large blocks of totora past the roots in the lake dirt (that’s the large brown block in the photo below), stake them on top of one another with long eucalyptus rods, then tie together. It’s like a quilt: keep adding to make a larger size. The totora stems are then added to a meter thick to provide the “carpet” on which to walk. Each island is anchored with rope (used to be a plant-based rope but it would break after months, so nylon rope now used) and even longer eucalyptus poles pushed into the lake bottom. Each island takes about a year to make and lasts about 30 years if well constructed. With more tourism, the islands need more upkeep, as there are more bodies to trample the grasses. Rot is slowed with more layers of the totora, each layer at 90 degrees to the previously placed layer. 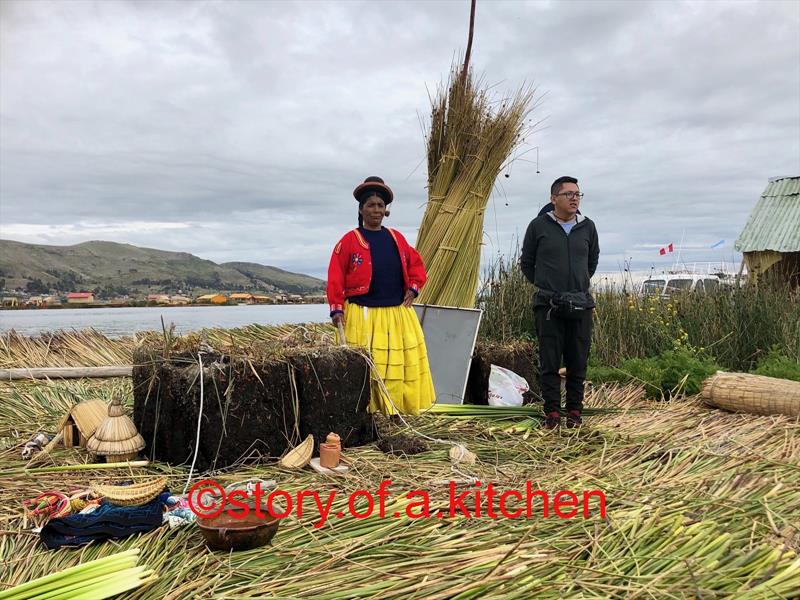 The white totora root is tasty: sweet and juicy, like a much better celery. The green skin can be held on the head to relieve headache and to brush teeth. (Sky-Girl was just asking me today while I typed this, “Mommy, how does something that taste good and from the ground clean our teeth?”) People are clever and innovative! 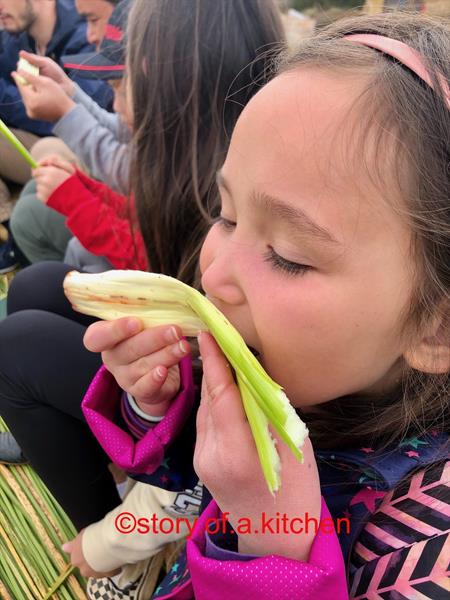 For romantic dates, couples borrow motorboats to travel to a secluded part of the lake. There is basic schooling in the communities but no high school, the students needing to ferry to Puno for that. They can play volleyball on their island communities but need to designate a ball fetcher if the ball ends up in the water. No basketball. Long ago when people died, a heavy stone would be placed on the belly to sink them. Now the Uros people have a plot in Puno to bury the dead on land.

We also learned about food on these islands. Fishing is the most important food source, obviously. There are various edible waterfowl eggs. 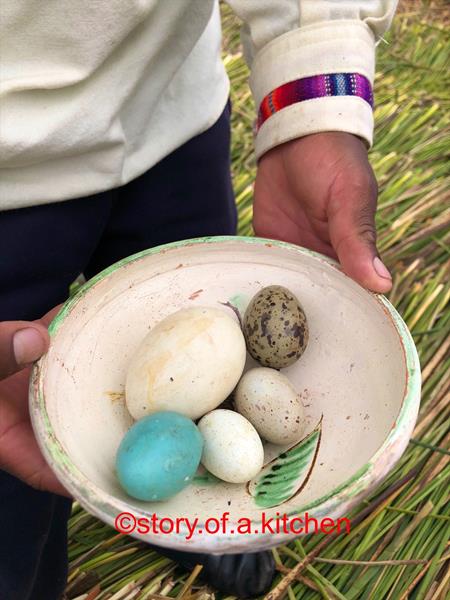 The island dwellers eat a local bird called choka, or nicknamed the “chicken of the lake.” It’s often dried like jerky because of no refrigeration. 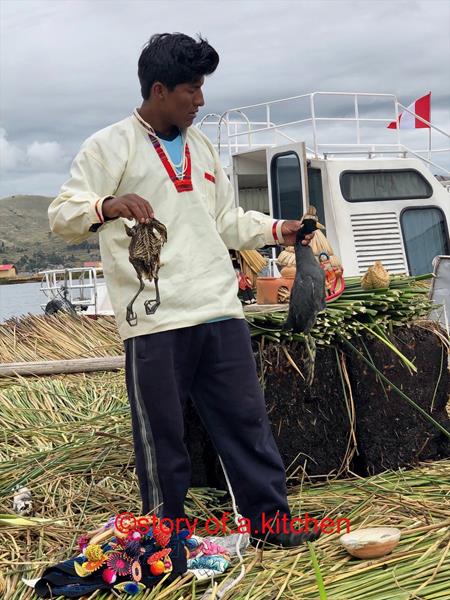 We were invited into the island people’s homes, cozy with floor mattresses, all situated in a circle around a common area where we had been sitting. There is limited electricity with solar panels, installed around 1996. 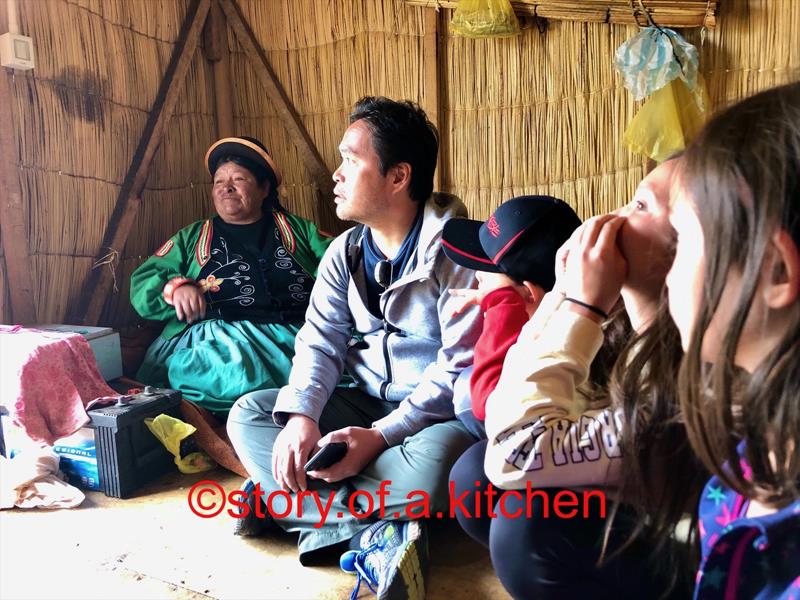 The sun did not want to peek through. The clouds hung like this all day. 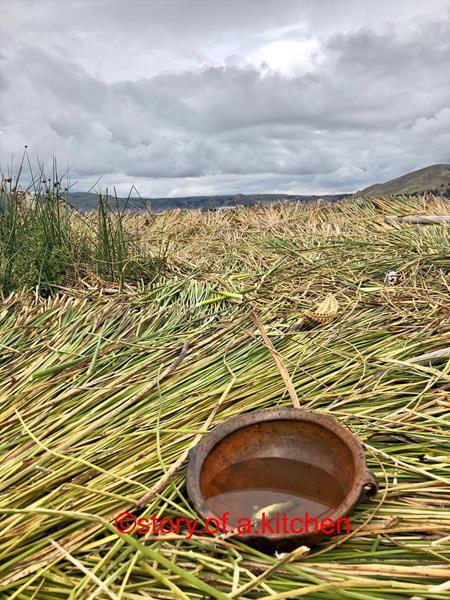 Good old Antonia rowed us over on the reed boat (a balsas) to the trinkety commercial island (called ?”Basurro”). The clouds moved faster above us. We were glad to leave there to take another ride on the motorboat to the lunching island. 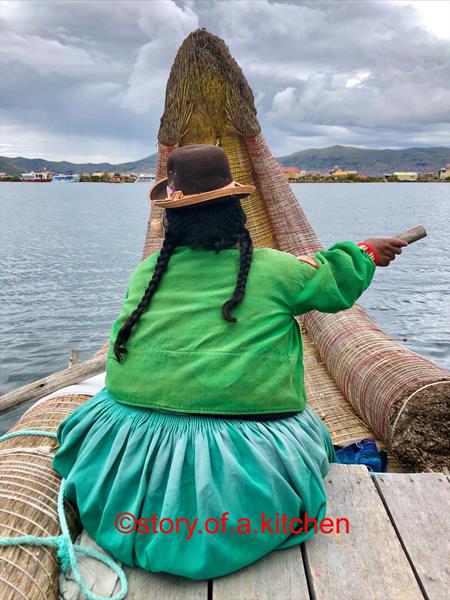 The motorboat took about 90 minutes, taking us to Isla de Taquile (Taquile Island), a solid-ground island about 45 km from Puno. We hiked these paths to the town square before lunch. Peach was fascinated by the mangy cats, which I would have loved to pet too, but I had no idea if they were aggressive. 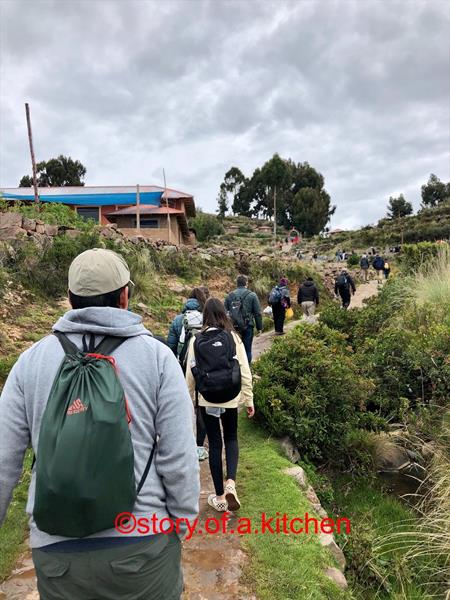 We walked through some of the communities of the Taquileños; there are six total with a total population of about 3,500. Though we walked less than a mile, the altitude still had us huffing and puffing. These sheep are in better cardiac shape than I’m feeling right now. Dyspnea on exertion! Dyspnea on exertion! Gimme a hyperbaric chamber. The peak altitude of Isla de Taquile is 13,287 feet above sea level, the main square at 12,969 feet. 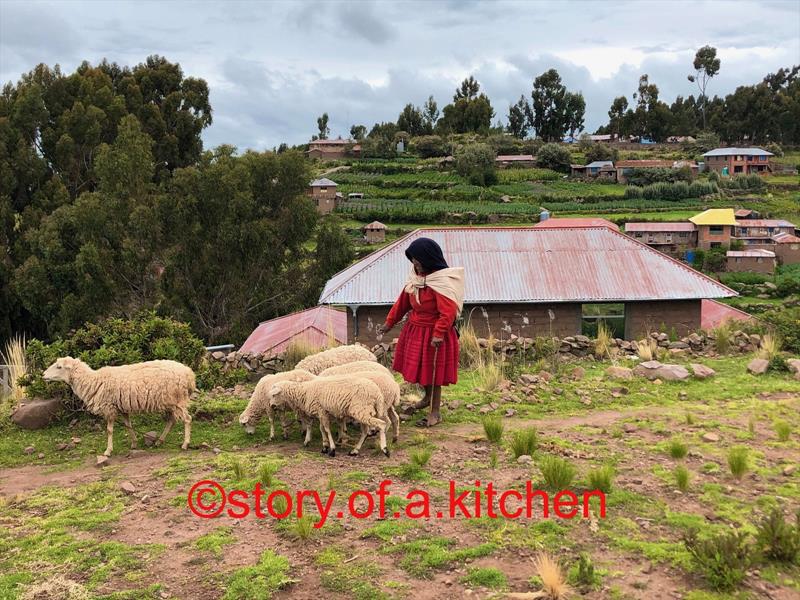 Ah, but I am calmed by fields of potatoes. Potatoes are my best buds. 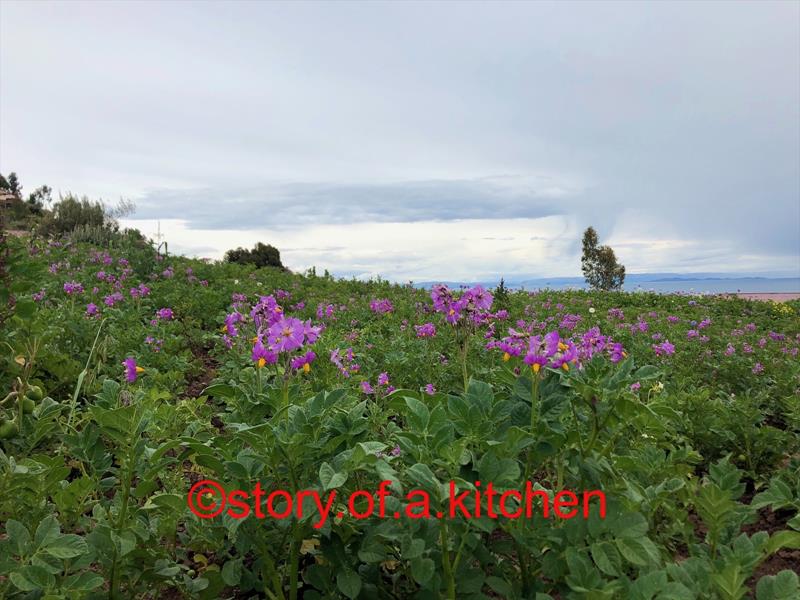 Lunch started with fresh bread and onions and peppers. They served us quinoa soup and trout, too. 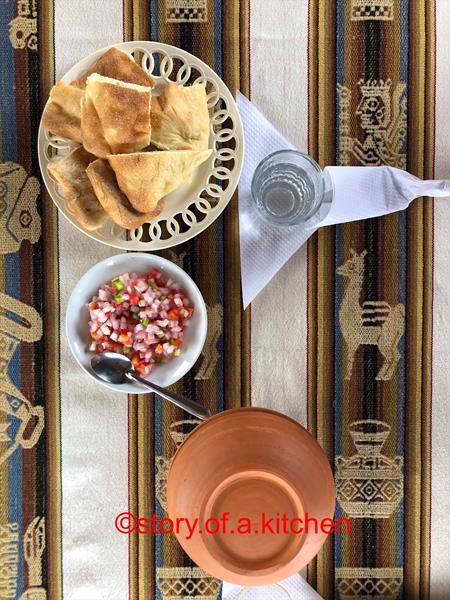 After lunch, we had more learning lectures from our guide Victor. The half white hat signifies that man wearing it is unmarried, the full colored hat is for married men. A black hat signifies authority. Marriage comes about after a couple lives together for 4 to 5 years, to be sure they want to get married. There’s no divorce so the trial period is important. 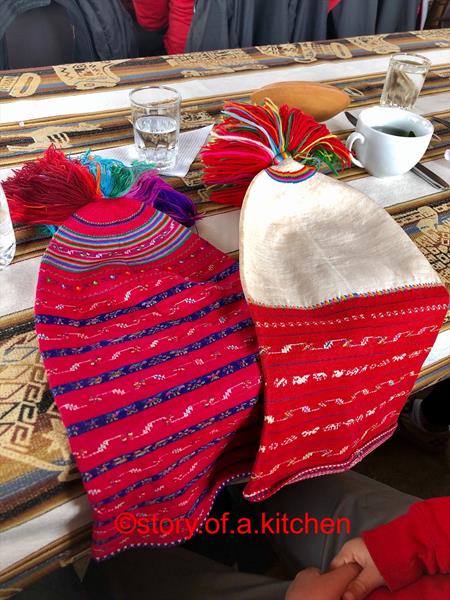 On Taquile, a this cactus is used to wash alpaca wool and clothing (similar idea in Cusco with a different cactus root). The active compound is called saponina (saponin in English) which foams and forms and emulsion with fats and oils. Soap! 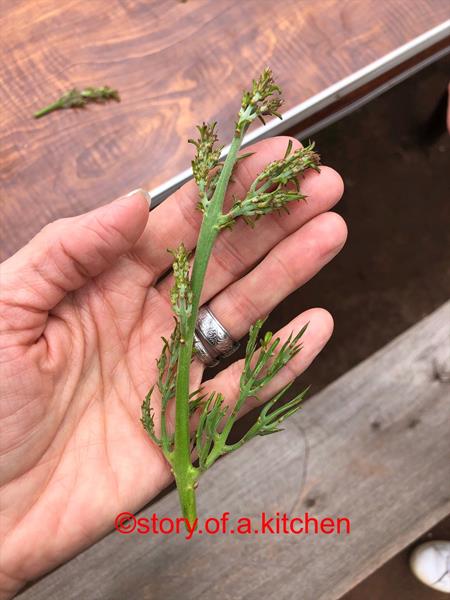 This man demonstrated the washing, washing a greasy wool with the mashed cactus and water for a couple of minutes. 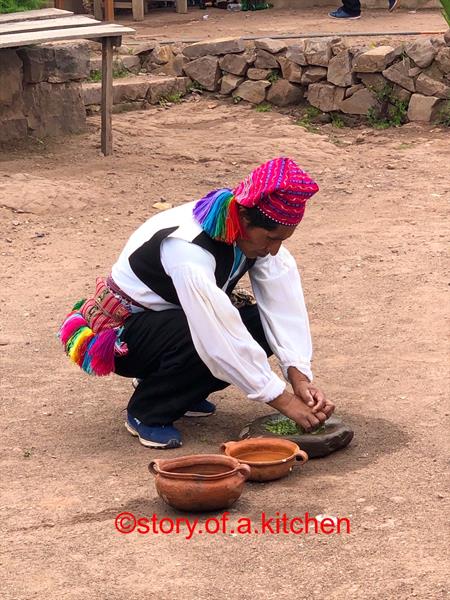 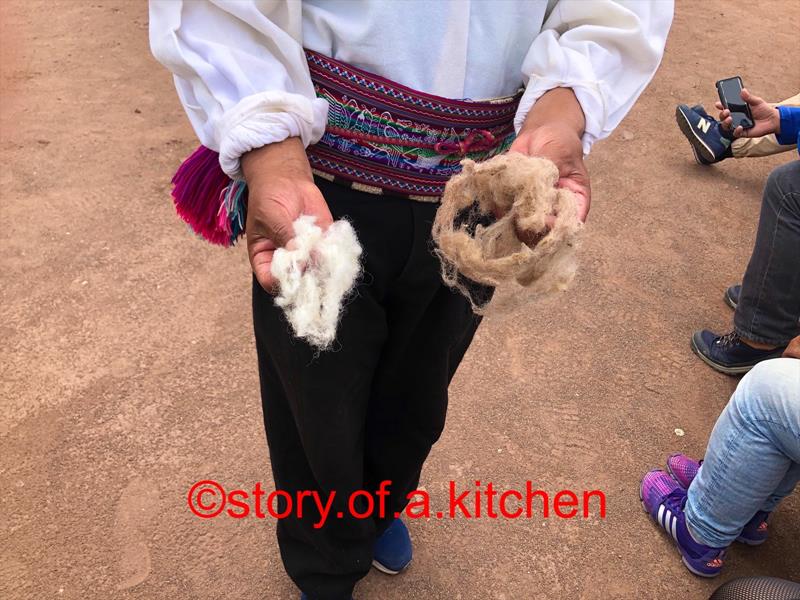 We took a long and rainy motorboat ride back to Puno for a late dinner. We had more of this fabulous dried Peruvian corn and plantains as a snack before dinner: 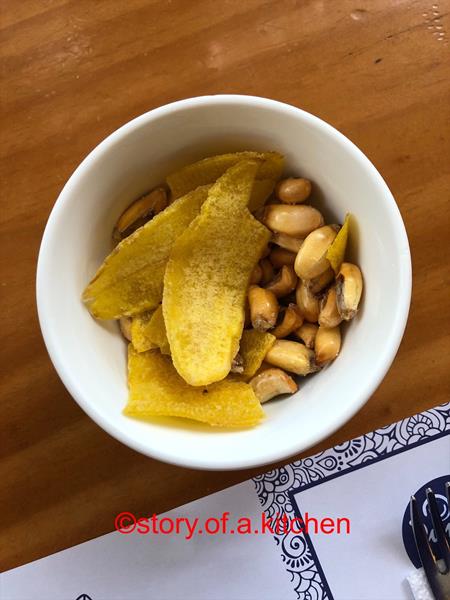 Another early morning brought us back to the airport the next day and a flight to Lima. We decided our last meal before a red-eye flight back to Atlanta needed to be seafood. 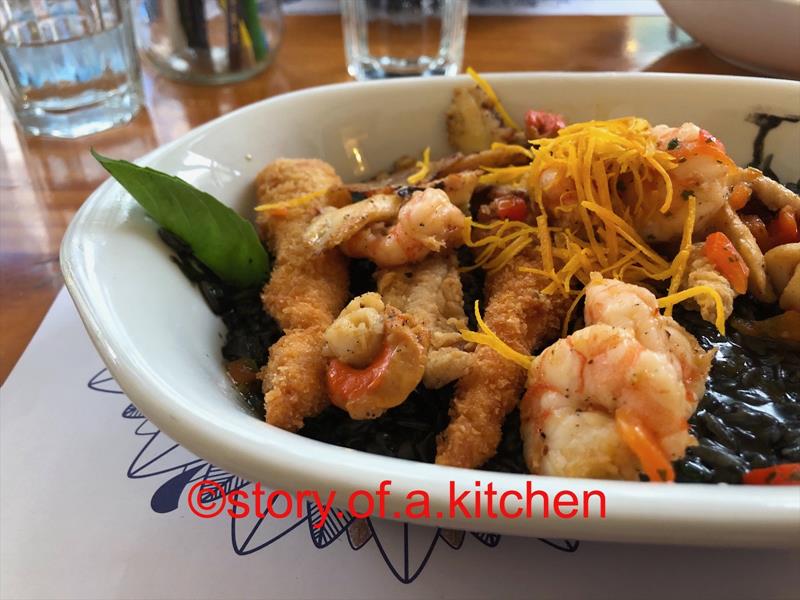 I also considered taking some tea home but wasn’t sure the koka tea would pass customs. And what would I need koka for at sea level? Just a wicked buzz! I left these in Peru, even the muña tea which which wouldn’t set off a drug-sniffing dog but may have soaked up some of the koka oils. 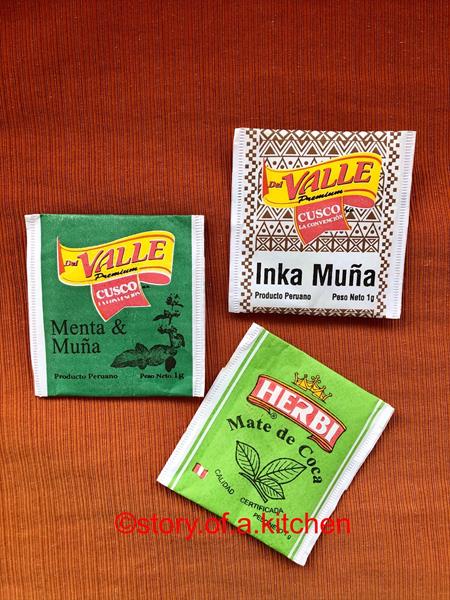 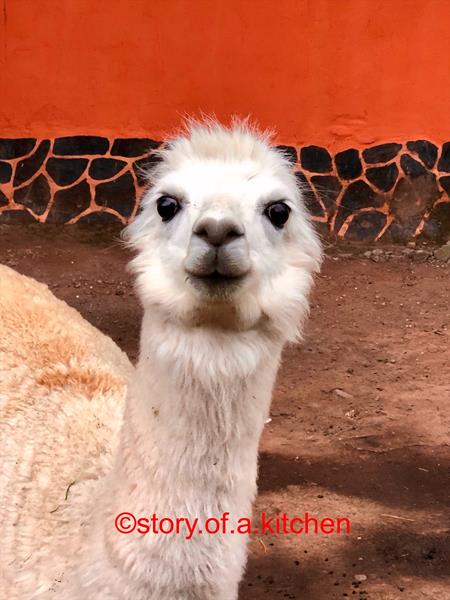 That’s the end of our trip — I’m posting this so late, it’s kind of sad to realize this is the last trip we’ll be taking for a very long time given the COVID-19 pandemic. I’ll have to stick to vicarious international traveling via recipes at home. The other Peru posts from our whirlwind week are here: the first post, the second post, the third post, and this one.

One year ago: persian love cake #2

Seven years ago: cong you ban mian (taiwanese noodles with fried scallions) and vietnamese pickled daikon and carrots (do chua)