following the incas to puno :::: 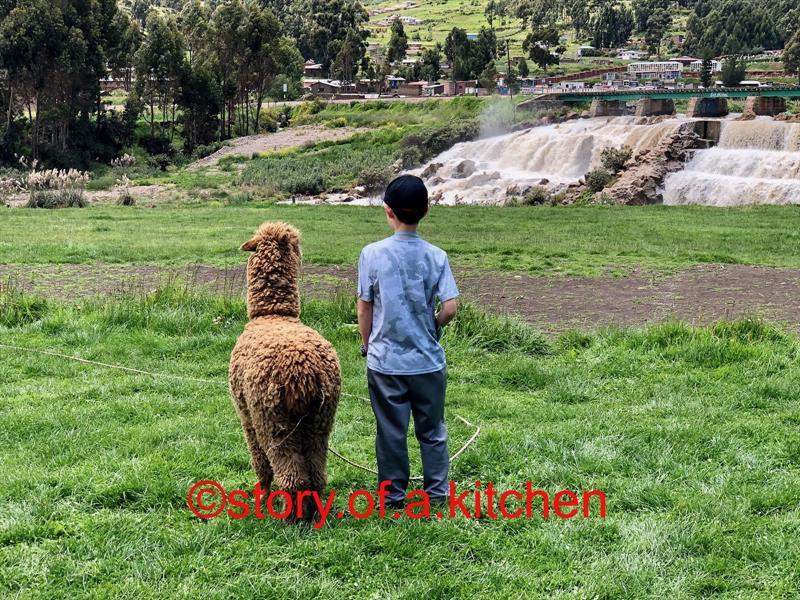 February 2020: We awakened barely rested from our Machu Picchu excursion in Cusco’s Royal Inca 2 Hotel, where we started our trip early this week. This time, our bedroom faced exactly East. I took comfort that our long day trip today expected a lot of breaks.

We rode an official double decker bus tour for 10 hours. There are 240 miles that separate Cusco to Puno, the port city that sits at the edge of Lake Titicaca. We passed dozens of fields filled with quinoa, purple-flowered potatoes, and stalks of tall corn. 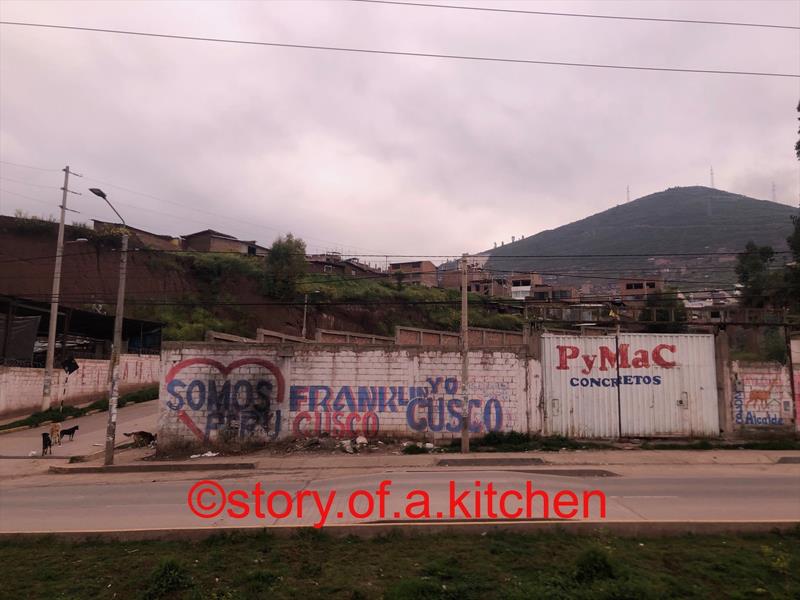 Many a brick wall we passed in cities were spray painted like this, advertising political candidates or shopfronts.

We trundled through Orapesa (10100 feet above sea level), a town of bakers. This area is popular for its sweet wheat bread. We passed craggy hills tinged with red dirt, almost like the soil of Georgia. Here, though, it was covered with low green scrub and the wide expanse of a valley

We drove another 20 minutes to what our guide called the “Sistine Chapel of the Andes“, the Temple of San Pedro de Andahuaylillas famous for its murals and gilded walls. The Andahuaylillas district sits about 25 miles from Cusco city, making it an easy day excursion. 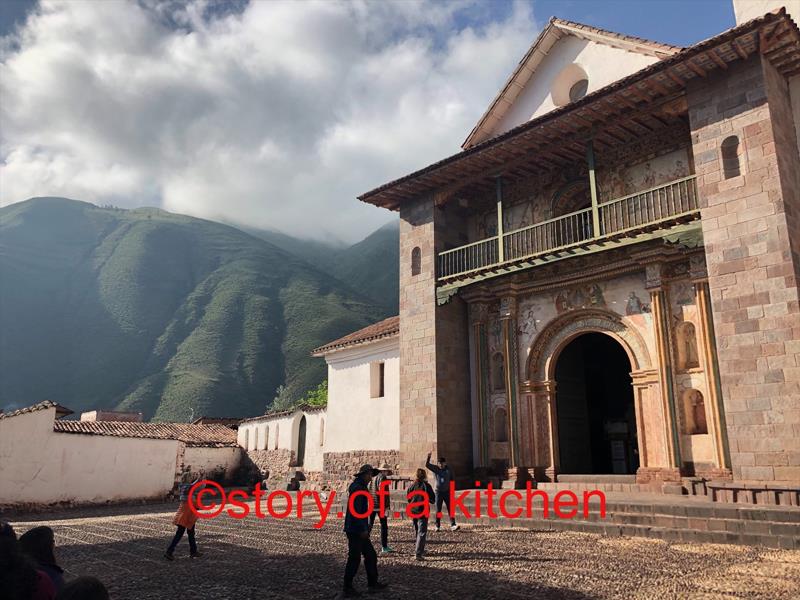 The Jesuits established this temple it in 1580, building the base of it on the original stone blocks of the Inca Palace. I’d add stolen, not just built. The Spanish conquistadors used the foundation of the Inca Palace, imposing their religion over the customs and beliefs of the region.

We were not allowed to take photos inside. It was gilded and ornate. It was bright and full of texture. The back of the church houses the two oldest functioning organs in South America. Throughout the church, there are so many layers of art from Mudéjar, Baroque, and Arabic. Canvases stretched up to the ceiling, many of the series representing different parts of the life of St. Peter, much in the style of Michelangelo. Our guide explained many of the paintings were done with a “cooperative” intent, many of the murals and gilded images done with indigenous and Spanish artists. These hybrid paintings show Incan and Baroque design with Christian themes: really, the “cooperation” sought to convert the Incas. Some of the art was done by parish priest Juan Pérez de Bocanegra. The murals at the front of the church are translated as “The Way to Hell” and “The Way to Heaven,” done by Spanish artist Luis de Riaño around 1626. This pictorial refers to the Biblical verse from Matthew 7:13-14: “Enter through the narrow gate. For wide is the gate and broad is the road that leads to destruction, and many enter through it / But small is the gate and narrow the road that leads to life, and only a few find it.” Awwww, man.

While the murals recognized local indigenous and Inca peoples’ culture, they were diluted and erased by Christianity. (The Christians had trouble with the idolatry and favored “civilizing” the natives.) (For some more detailed history, check out the esteemed Dr. Cohen-Aponte’s writing: Ananda Cohen-Aponte, Heaven, Hell, and Everything in Between: Murals of the Colonial Andes, University of Texas Press, 2016.) 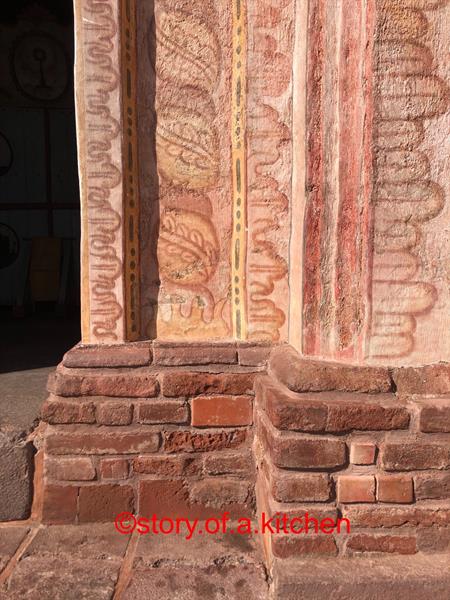 We headed toward Raqch’i, following the swollen, brown Willkanuta River. 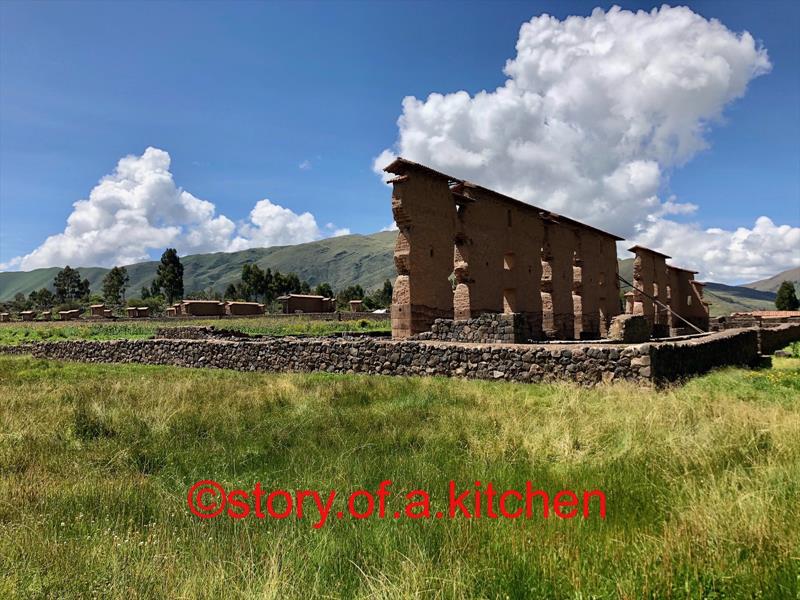 Raqch’i was one of the last Inca villages in the 15th century, evacuated just before the arrival of Spanish colonizers. The sun grew hot as we wandered through the crumbled stone. This site was built as a control point on the main road from Cusco connecting to other parts of the Inca Empire as far as Lake Titicaca. The fence you see in the photo below shows part of this pathway.

The temple here is called the Temple of Raqch’i or the Temple of Wiracocha (which is actually just one part of the complex). The god Wiracocha was believed by the Incas to be the one to create all life, the sun, and the moon. The temple is just over 300 feet long and 84 feet wide, thought to be one of the largest Inca archeological sites in the area. Material and construction are different than other Inca sites, using pumice volcanic stone and adobe walls, which is more typical for sites closer to Lake Titicaca. 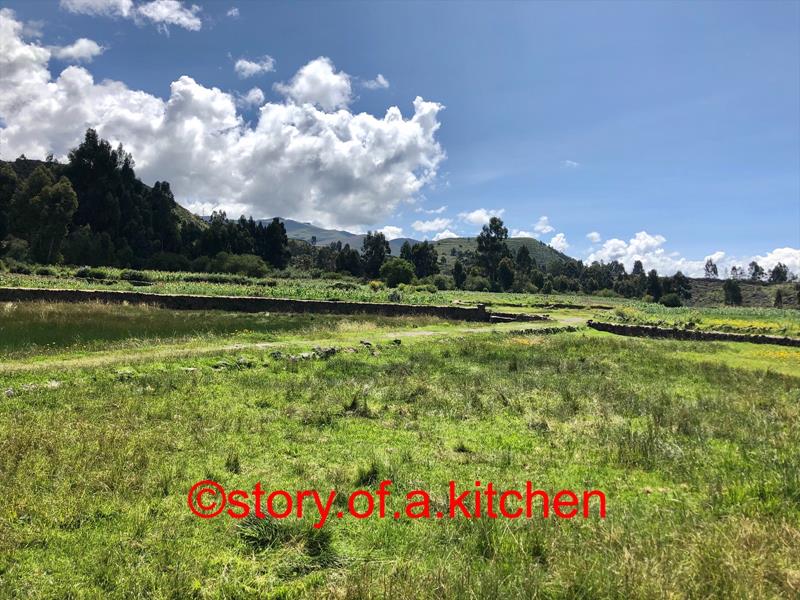 The zigzagged path one must use to walk through the site it is thought be a motion related to Wiracocha and Inca cosmology. Inca folklore tells the story of Wiracocha in this region. He walked through the Kacha province but was attacked by the people who lived there, not recognizing him. He reacted by creating fire in the sky which burned the hills. The people realized who he was and asked for forgiveness, later building a shrine where they first saw him. When the ruler Huayna Capac traveled through the province, he noticed this shrine to Wiracocha and asked about it. He ordered the building of the temple to commemorate the holy event and to worship Wiracocha.

The Spanish colonizers razed it and rebuilt a Catholic church on the land instead. #notsurprised 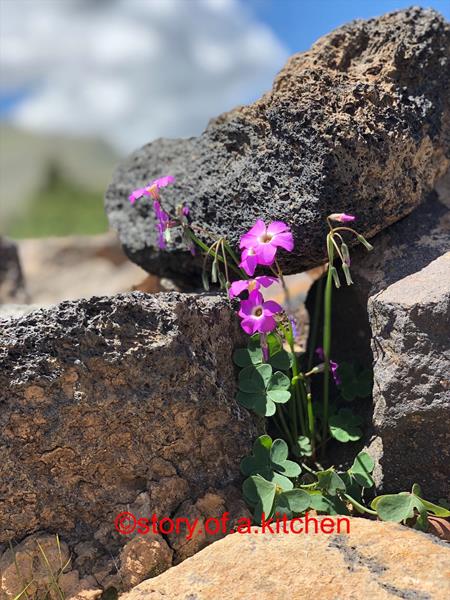 We headed for lunch next, driving past rocky peaks softened with furs of green, landing in this place with gleaming floors and lovely light coming in from the back windows. 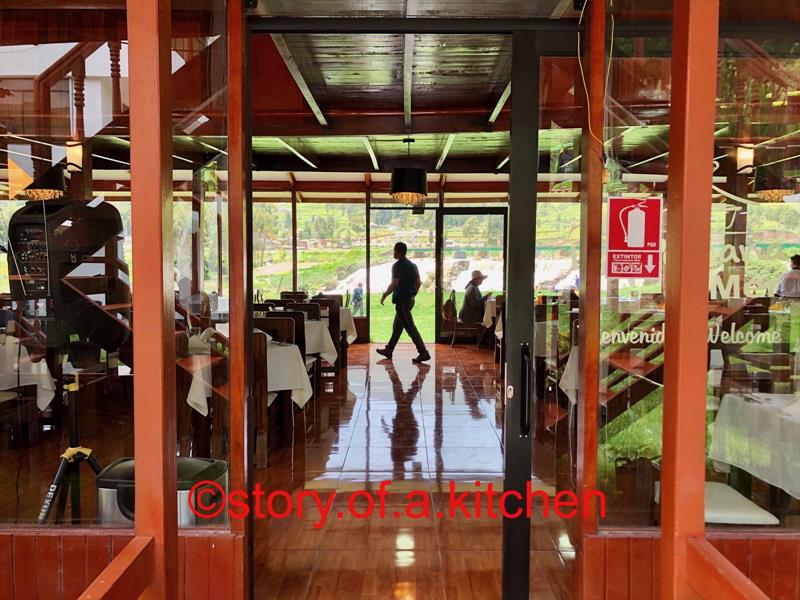 The set up offered a lunch buffet (always potatoes!) with a sunny view of the waterfall in the distance and alpacas nervously wandering nearby. My favorite part of the meal were the crunchy, slightly salty Peruvian-style corn nuts. We were serenaded by a band heavy with pan flute playing mostly covers like “Hey Jude” and other Beatles tunes. 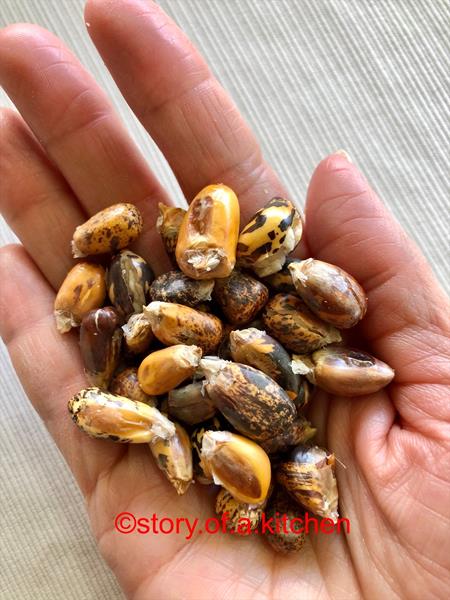 The adult alpacas on the property had loose tethers so as to keep them from scampering away from the patrons. There were too many curious tourists who wanted photos with the animals. Most were too skittish to get close enough to touch except for a baby alpaca, held on a leash by an employee. “No photo. No photo,” its keeper told us. Maybe there’s a law against keeping babies confined or away from their mothers.

Grub managed to get close enough to this alpaca enough to take a very quick and nicely-timed photo. I was just about to angle the camera 90 degrees to get the peaks in the distance when…

… Grub poked the alpaca in the ear and it bounded away.

After lunch, we headed through the Marangani district, where the La Raya mountain range runs. We drove through a large valley, a deep cleft between peaks and peaks for miles. Yet we were still at 12900 feet altitude, even on foot in the valley. The max altitude we hit just as hail and sheets of rain started was 14240 feet. (Took a terrible photo.) There were no trees, not quite barren but not as lush as Raqch’i. We passed cows seemingly oblivious to the weather, potato fields, browned winding tributaries foamy with rain, and far off wispy plumes of smoke on farmland. The sun returns and the plant scrub turned to oranges, yellows, and greens.

We left the Cusco region visit Pukará (Quechua for “fortress”), a city famous for its rooftop ceramic bulls. These ceramics are an Andean tradition transferred from generation to generation, to promote happiness and protection in homes. The story is each home must have two bulls, representing the couple who runs the household.

Folklore from the area relates a terrible drought many, many years ago. Thirsty and suffering, the people planned to sacrifice a bull to the god Pachakamag in hopes for rain. The bull struggled away from the group of people marching it up to the Pukará rock for slaughter,  and tore its horns into the rock. Water sprung from the rock, saving the village. The villagers raised the bull to a high position of sacrificial animals. 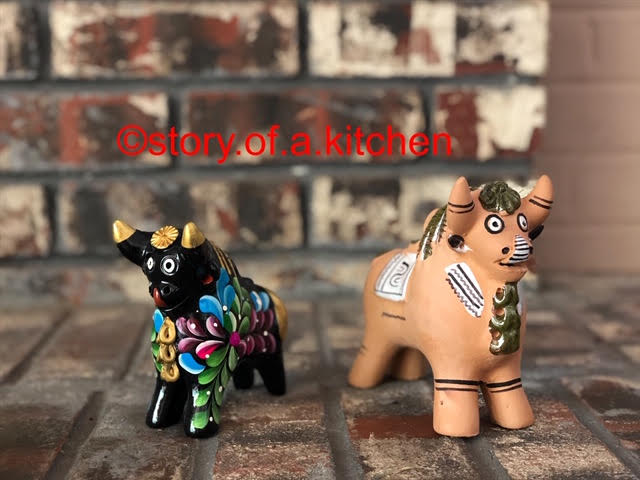 Bulls did not actually exist in the region until around the 15th century when the Spanish arrived–not actually an ancient tradition but one adopted from the animal’s ubiquitousness. After the Spanish arrival, shepherds practiced the ceremony of the Señalaquy. It united a bull and a cow to ask the gods for fertility of the herds. The bull would be cut at the chest and ears and its blood mixed with wine and koka, the shepherd drinking the mixture as an offering.

People in this region were known for their mastery of sculpting and use of clay. Locals began to sell the small ceramics at train stations and tourists in the 19th century when it became more a part of the culture and craft. Instead of live animal sacrifice and blood-drinking, the modernized ritual of Señalquy involves gifting a pair of ceramic bulls to newly married couples. This pair acts as an amulet for protection, installed on the roof to ward off ill-will and wrong.

Before we headed to the bus, we stopped at the Iglesia de Santa Isabel for a photo. We couldn’t go inside–but a lovely door! 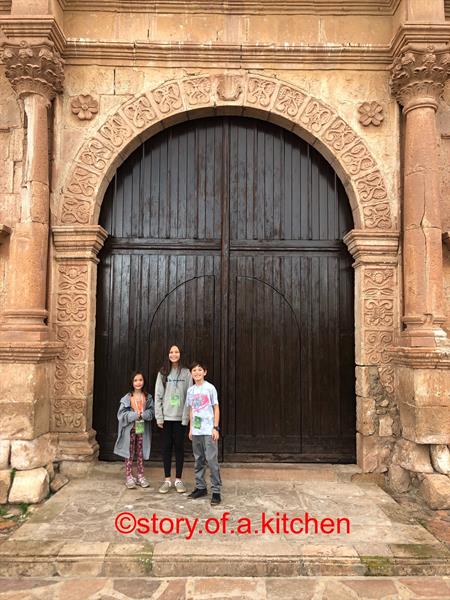 Back on the bus for another two hours south-east to Puno. We arrived at around 5:00PM, the sky cloudy and noting the Uros Islands in the distance on Lake Titicaca from the window in the hotel lobby. That is where we travel tomorrow….onto Día 6!

One year ago: persian love cake #1

Seven years ago: cong you ban mian (taiwanese noodles with fried scallions) and vietnamese pickled daikon and carrots (do chua)