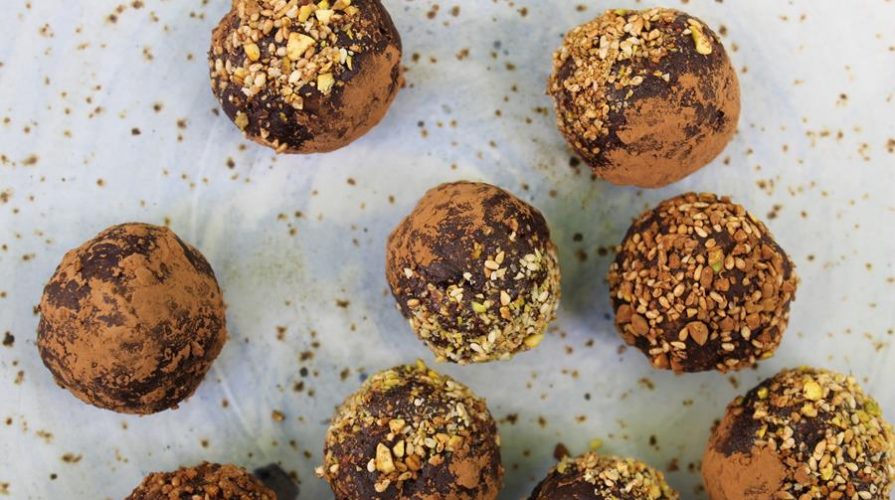 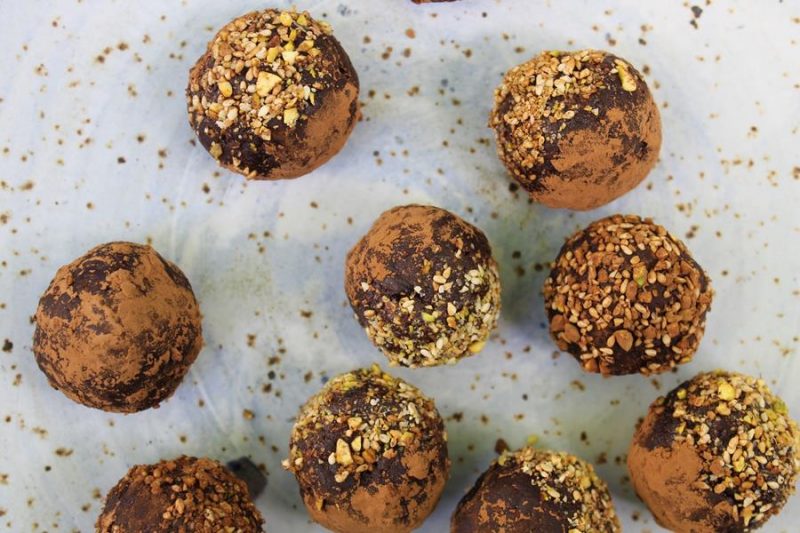 Immersed in the throes of normal life, I’ve been falling back on lots of recipes already posted on the blog for sustenance. I make this Asian slaw often. This leek and zucchini soup has been in regular rotation. Mulligatawny is always a favorite with Eat. I’ve been making a soupy variation on these black beans. Plus, the kids are all more vocal on what they like and what they don’t — except sugar. It is a fickle season: One week, they may love the enchiladas. The next month, not so much. Whatever meal it may be, they expect sugar surrounds it in any form. They still haven’t quite caught on, or perhaps in a strong wave of denial, that eating sugar all day DOES make them feel irritable, headachy, and tired by the end of the day.

Though I expected the kids would love these chocolate-tahini balls, I didn’t make them with the kids in mind. In fact, I thought if I made these sweet treats with them circling like sharks, I would barely get a taste. There is no added processed sugar, and the texture and taste are very satisfying for a deep, sweet treat.

This recipe reminds me a lot of my Schrödinger‘s brownie recipe, except these gems are chewier and a little less crumbly. It really depends on the softness of the dried dates you use. I didn’t use a fancy cocoa here. I had a standard Hershey’s unsweetened cocoa in my pantry because that’s all I could find locally one cold day for homemade cocoa after snow and sledding. My revered black cocoa didn’t quite fit the bill for this, though I could experiment later.

The chocolate taste comes through just right with the Hershey’s (or probably whatever standard unsweetened cocoa you have) in part because of the added salt. Salted chocolate may seem strange, but it is necessary for the dark and balanced flavor here. The tahini is not too strong either, but gives the chocolate pairing a nice creaminess. Dried Mejool dates and maple syrup always remind me of caramel and that flavor undertone is not lost here either. The pistachios and sesame seeds provide a nice texture and hold it all together.

Instead of the recipe’s recommended dipping of the balls in half cocoa and half pistachio-sesame mix, I prefer using all pistachio-sesame. I did a mix for the photographs.

So, kids, here is a sweet treat — after the enchiladas.

This recipe is from the bon appetit recipe site and originally named salted chocolate-tahini bliss balls. I wouldn’t go so far to add the “bliss” — these are really, really good but not a life-changing experience.

One year ago: I was on a break

Three years ago: apple and red currant pie with a flower cut-out crust

Save Print
chocolate-tahini balls recipe
Author: story of a kitchen (from bon appetit -- https://www.bonappetit.com/recipe/salted-chocolate-tahini-bliss-balls)
Recipe type: healthy snack
Prep time:  30 mins
Total time:  30 mins
Serves: 10
The longest active part of this recipe is shelling the pistachios. Do it ahead of time if you can and these come together quickly. There is also a 20 minute wait time as the balls chill before coating with the cocoa and nut-seed mix, which you can use to prep the coatings. The original recipe makes 10 balls -- not much. Since you're messing up a food processor anyway, you might as well make a double recipe. The balls keep for a month in the fridge.
Ingredients
Instructions
Wordpress Recipe Plugin by EasyRecipe
3.5.3236
If you love this, share it!