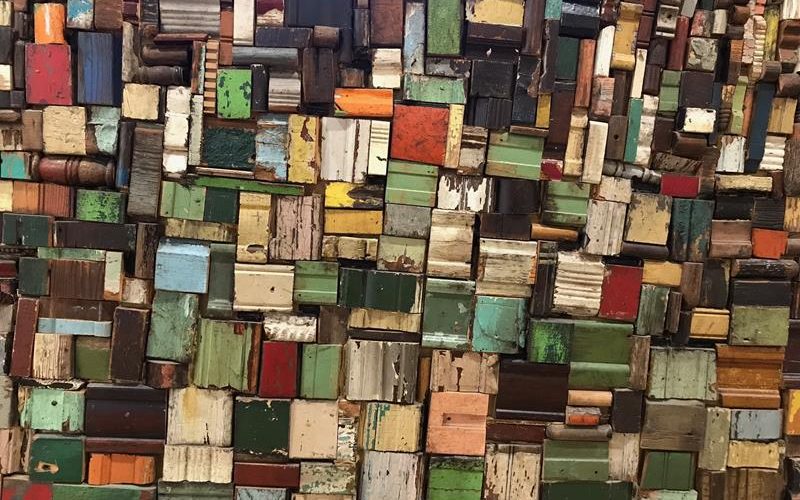 kitsune chasing me in chicago and japan :::: 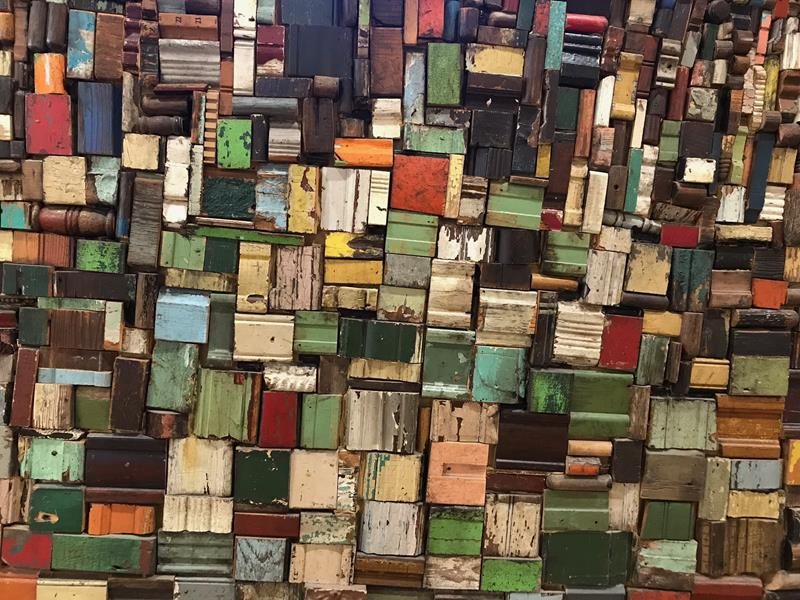 The above photo is a wall at the Intuit: Outsider Art Museum in Chicago taken in 2019. I took a similar photo in 2006. It is the architecture of fragmented sleep, almost whole with each piece fitting together, but rough, mismatched, and colorful.

No recipe today, just highlights of Japanese food along with thoughts of sleep.

I spent a few days in Chicago this spring for a conference. Having lived there before, I looked forward to visiting again and traipsing through some of my old haunts. There are two defined times that I spent here, tucked among the quick trips to see live music or eat wonderful food. The first time was in the West Loop, home for four years in medical school. The Blue Line “L” was a block away, the tcka-tcka-tcka sound of train-on-track reminding me daily of its movement bringing people in and out of the city. It was my connection to the lake. After exams, my routine was to alight at the Washington stop and run for miles lakeside, finishing with a thin crust of salt on my skin. It was fabulous. There was a year in Champaign, then we moved to East Lakeside, cuddled even closer to the lake and its longer swaths of gravel trails.

Sleep was elusive both periods, though our East Lakeview stint encompassed new parenthood and residency training — sleep was much more missed then than any other time. How I hated and loved that time. It was demoralizing and visceral, the lack of sleep accentuating those feelings.

My recent trip to Chicago repopulated these moments in me, a simultaneous welling up and sense of dread. That residency training and parenthood are two very important times in my life but did not go hand in hand made that time confusing when trying to overlay nostalgia. After the workshop co-presentation and my admitted lack of interest to attend other events, I walked old neighborhoods and work environs, visited the Intuit: Outsider Art Museum (where a bulk of Chicago’s most famous outsider artist Henry Darger’s work is housed — and I happened to be there on his birthday!) where my brother used to work, and found good food.

In mental preparation for an upcoming work trip to Japan in June and to celebrate Chicago, I made reservations for the Kitsune Restaurant. Their goal is to incorporate Japanese techniques and flavors with Midwestern ingredients. First, the name caught my attention, having connected with it in some writing and in Japan.

I first learned the history of kitsune (キツネ, 狐) when visiting Japan in 2017 and blogged about it here. This magical fox is an important symbol in Shinto shrines, often dressed in red votive bibs (涎掛け, yodarekake). They are messengers in Shintoism who shapeshift, often into beautiful women. If you want to read more about the folklore, go to my other post, about halfway down. There is shapeshifting of the words even: kitsu-ne means come and sleep whereas ki-tsune means always comes.

Chicago always seems to come to me, often in sleepy memories of babies, new careers, grit and soot, crispy fall weather, and the smack of the lakeside wind. Not only did old neighborhoods and workplaces conjure these memories up, but also when walking along the lakefront for hours on my recent trip. I walked among headless and armless giants at the Agora sculpture in Grant Park (designed by Polish artist Magdalena Abakanowicz), hearing calm shrine-like musical notes shapeshifting into spookiness as the wind blew against the rough, rusted iron: 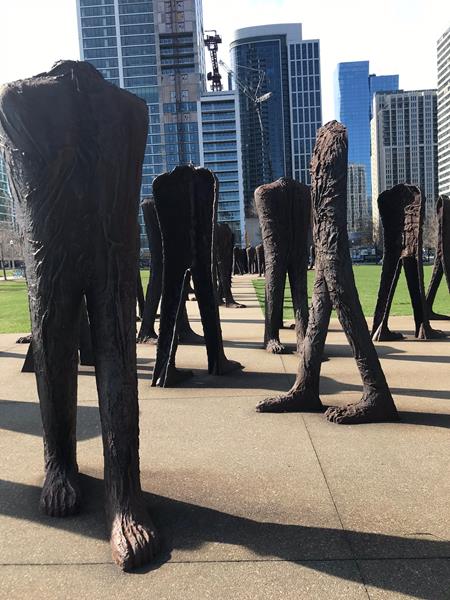 That same weekend, the food at Kitsune seamlessly shapeshifted through cuisines. It’s an unassuming place, a small corner restaurant in the North Center area of the city. The staff were friendly without stuck up airs, dressed in casual clothing and friendly smiles. I ate pickled green strawberries. I tasted a salty, cold oyster. I drank house-made ume soda, wonderfully tart, sweet, and a little salty, just like the plums. My favorite dish from the night: gnocchi made with a highly refined arrowroot powder. They were so smooth, it was like eating cream without the residual oily coating in my mouth afterwards (but there was a butter sauce). I wanted the sous chef to sit down next to me and talk about it more, tell me how the gnocchi were made step-by-step, so I could revel in the vicarious process. But alas, he had duck to cook. 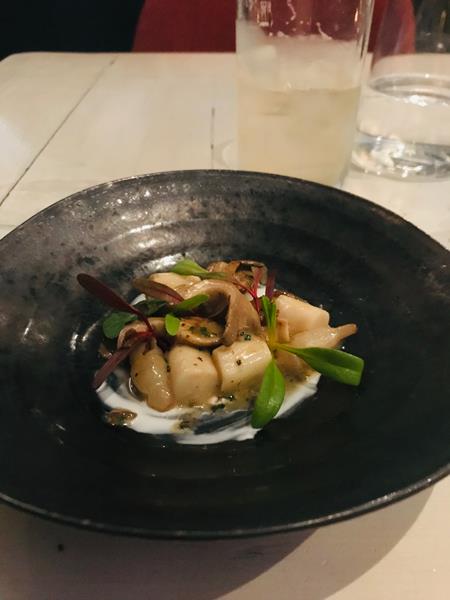 The weekend was topped off, not exactly a cherry, but by a chilly Sunday. April in Chicago means… snow. My flight was delayed at O’Hare for 8 HOURS and 45 MINUTES. While I had the luxury of being in the Delta lounge for part of the time, the constant updates of delay after delay also upended my appreciation of the numerous helpings of flatbread and cheddar cubes. I got straight up impatient and annoyed. But I got home, the kitsune calling me to sleep.

It happened again, that calling, when I flew to Japan for work last week. Mired in flight delays from weather, an unexpected overnight in Toronto when flight connections were missed, the destination layovers kicking my ass so hard, and jetlag, kitsune was still evasive at first. I visited shrines, 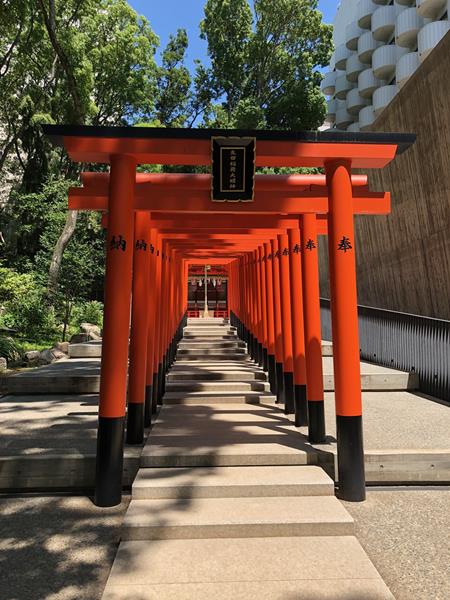 ate food that I remembered from my trip in 2017 (takoyaki will always be a favorite), 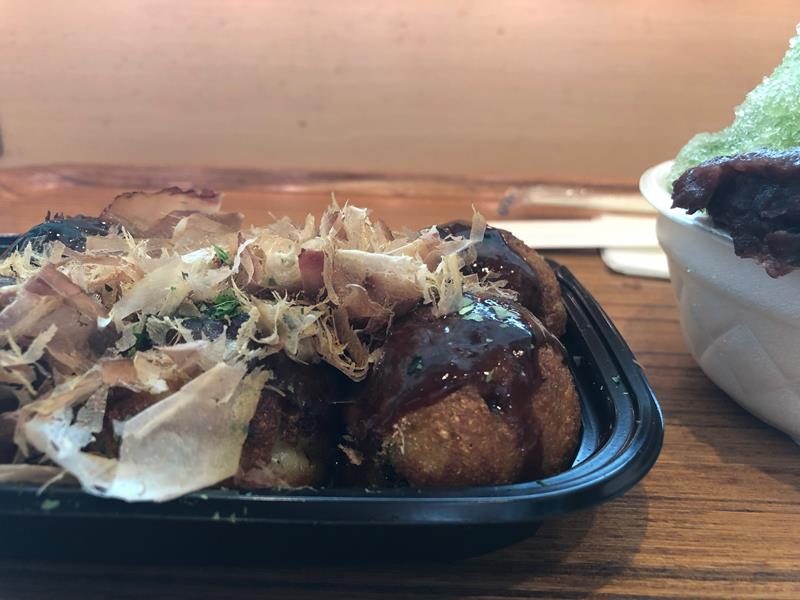 Takoyaki, or octopus dumplings, drizzled with sweet sauce and bonito flakes. I polished off six and regretted not getting more. 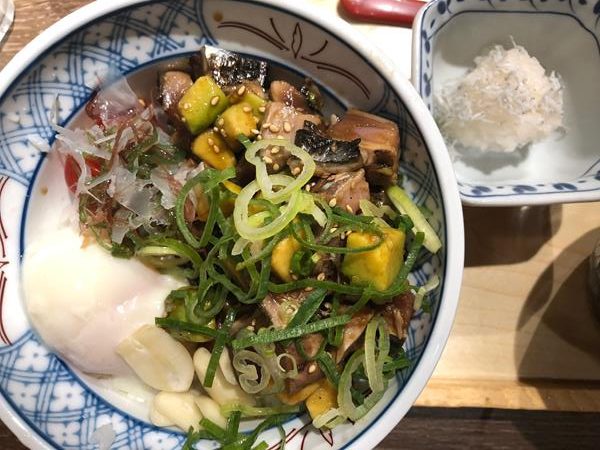 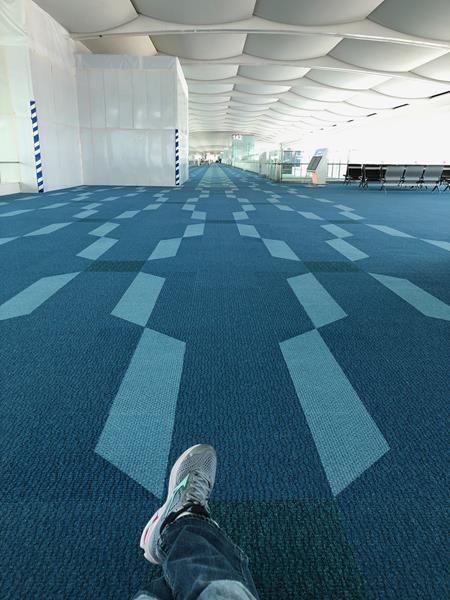 Quiet Gate 141 and gray light of Haneda Airport in Tokyo — one of the best layovers ever!

Layovers on the way home were l–o–n–g, and thankfully not as tedious as I expected. I reveled in the hours of uninterrupted writing time, people watching, and good Japanese food (it’s good everywhere, even train stations!).

But sleeping on airplanes is not my thing: I snort when I sleep sitting up, I’m in close proximity to strangers who I don’t want to lean on, I undoubtedly will drool, and the coach class seats are not meant to be slept in by anyone with a spine and bipedal, upright abilities. A 13 hour time change doesn’t help either. It’s a rough go, every time, sleep’s texture like the Intuit wall: beautiful, jagged, colorful, mosaics of weird lucidity. Jet lag chases kitsune away then calls her close and pulls your eyelids shut unexpectedly. It is feeling drunk without the alcohol, some internal button that daylight sets. I sway in a chair if I sit too long, catching myself from falling out.

The flicks of kitsune’s tail form the shapes of Circadian rhythm and sleep drive curves. When I look at figures on a page (Matthew Walker’s book Why We Sleep is excellent), those of waves of activity, of body regulation, stress me out because of the expectation. There is a constant self-interrogation: What should my body being doing now? Why am I not sleeping? I’m making this worse. When I try to feel the calm to help to move into sleep, I imagine myself a cat or kitsune curled up, everything tucked into a warm oval.

One year ago: pannekoek with cinnamon and lemon

Two years ago: bourbon cherries – and prep for our Japan that year

Four years ago: the tart green